This page made by Shino, written by Clops and colored by ALOS

I really don't have anything better to do.

she didn't know that jet had tricked her into getting pregnant at first. she thought it was an accident, or at least told herself it was. it was five years after apogee had been born that delta learned the truth.

besides, she doesn't want to validate the people telling her she's in denial of the truth for pretending she doesn't want to be a mother, and there's nothing wrong with that. it's that smug, "see look? you do have maternal instincts!" attitude that's driving her to drink. I know without maternal instincts most people would be capable of encouraging others, feeding them, and showing them affection, but who cares if she has them or not? the important thing is she doesn't have to behave like a mother, but she's afraid that she does, and that's why she's rejecting apogee.

or at least that's what I'm getting from this comic.

The Devil's Advocate
@royalbardofequestria93
I don't know how cannon it is, as it's merely just a theory based on Shinodage's artstyle, but it's likely that Jet got Delta drunk just so he could make her pregnant. 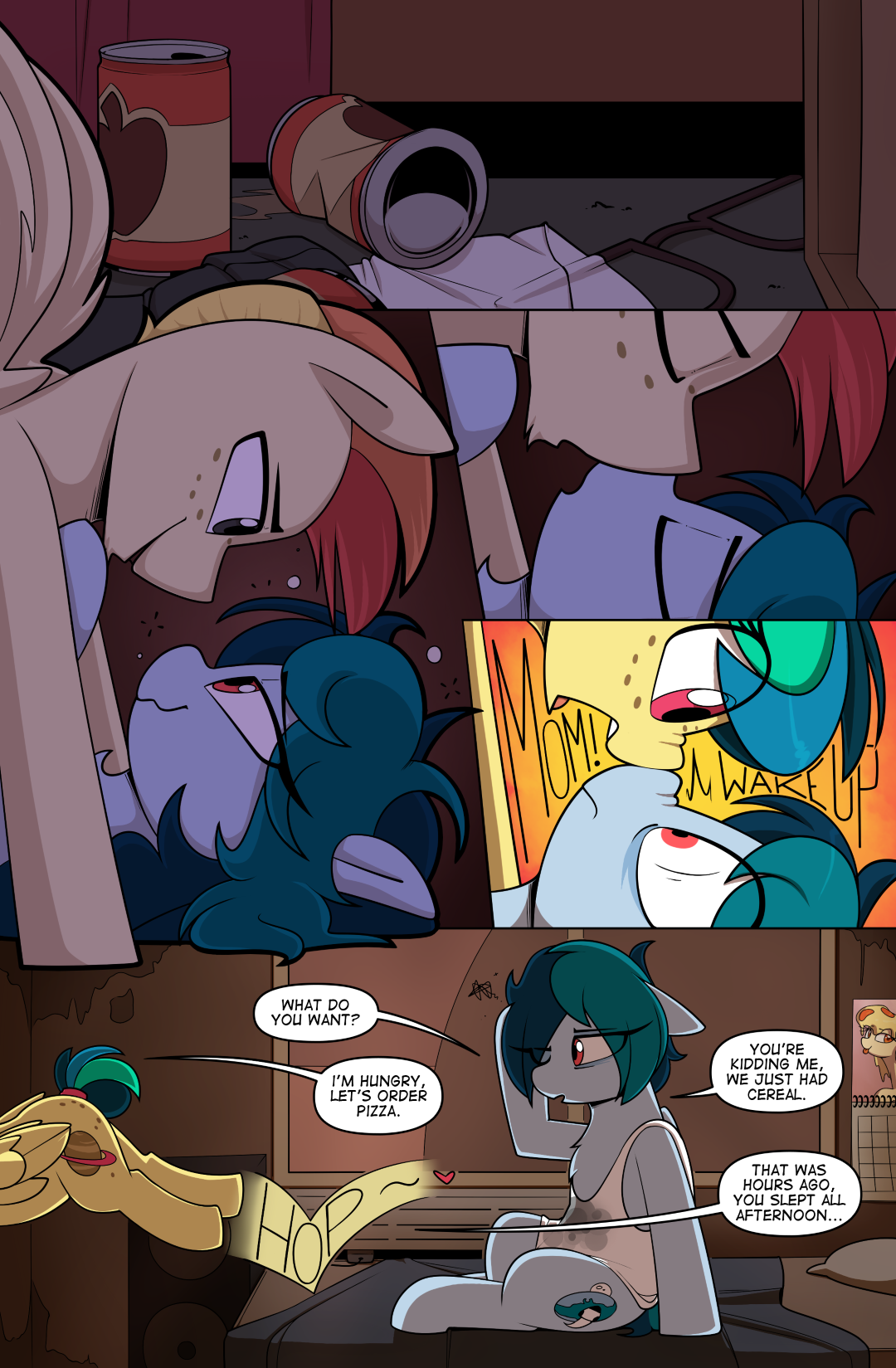 Shinodage draws really detailed and amazing facial impressions, and in this comic as well as it's older form, Delta is the only one who has mouth suggesting being heavily intoxicated. The "drunk particles" also seem to be centred around her head, as there are none of them above Jet's head. From that you can assume that he was at least much less drunk than Delta (or alternatively just doesn't show off the effects of alcohol as well).

Also, we can see the moment where the idea seems to appear in Jet's mind, as he is the one suggesting getting drinks. 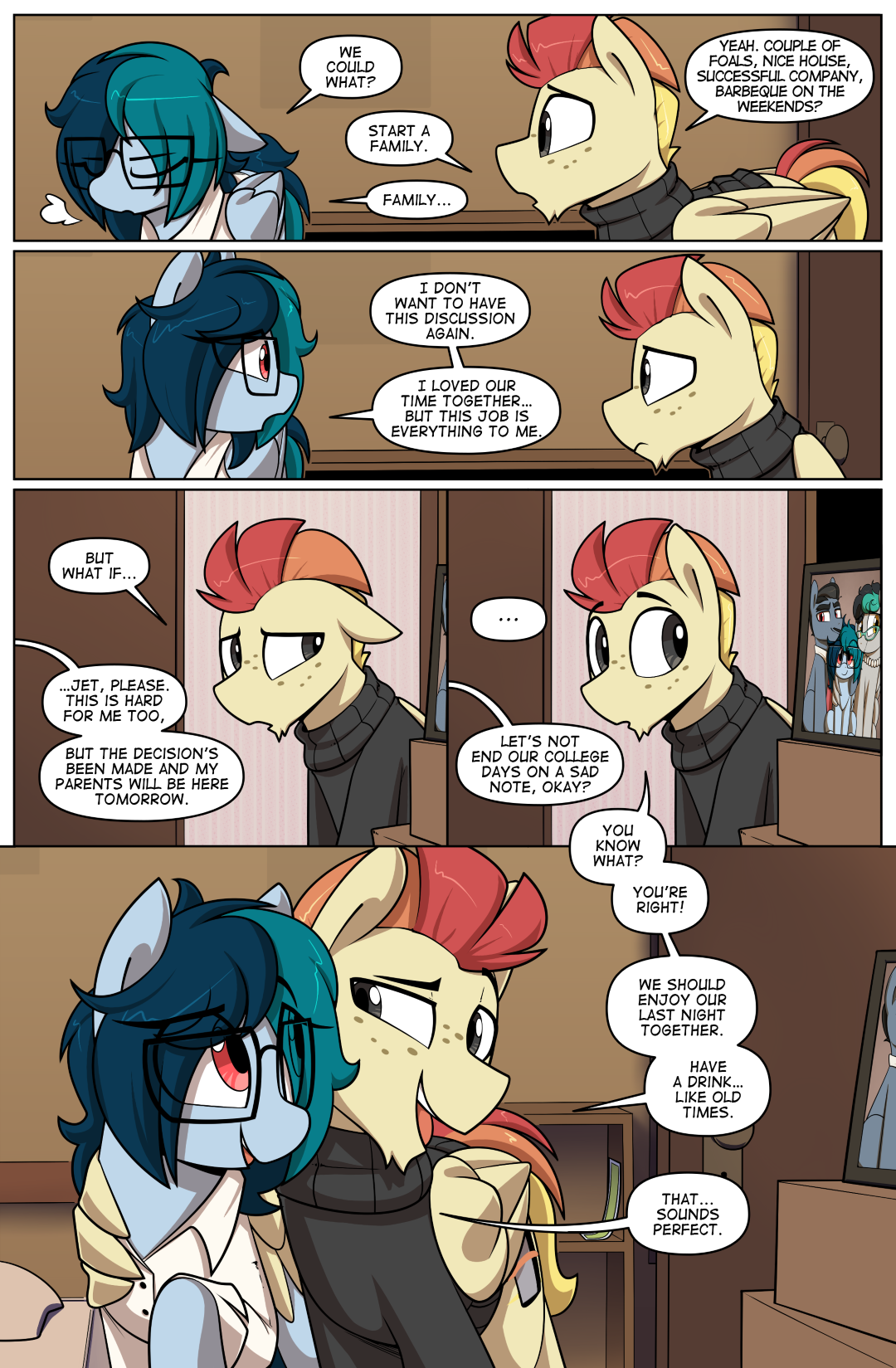 Then again, it's just a theory.

the worst part is it doesn't have to be jet. it could be anyone, because the compulsion is part of her biology.

no the worst part is that there isn't a biological compulsion, because she is successfully avoiding being a mother or doting on apogee. but she doesn't even realize she's capable of avoiding it, while she's avoiding it, because she's afraid there is a compulsion!

so delta is being a terrible mother because she's afraid that if she isn't, then she won't be able to deny there's a compulsion, and she'll have to admit that jet hurt her. her callous treatment of apogee is just an attempt to make herself invulnerable to what she thinks that jet did to her. loving apogee would be giving in, and agreeing that jet was right to do what he did.

it's a sadly common effect of trauma that its victims can't allow anything good to come out of it, otherwise how could they claim it was bad, or that they deserve to be upset about it? so their life continues to go down the tubes, because if it didn't, then all the years they spent avoiding good things will have been their fault.


Posted 8 months ago Report
Link Quote Reply
royalbardofequestria93
@AWGear
…Ouch. That's a good point. She really does love Apogee. (I have this headcanon that most Pegasi tend to be very doting mothers as a function of their biology. If so, Jet knew she would choose motherhood over pursuing a career if she became pregnant-it'd be a biological compulsion. As a Pegasus himself, he'd know this. He took that part of her and used it against her-no wonder she's scared of expressing that part of herself. It's fear that Jet would use it to hurt her again. Small wonder she's so broken.)
Posted 8 months ago Report
Link Quote Reply

Fuzzbutt
what's wrong with running a junkyard anyway? it's a cool junkyard, it's her own junkyard, and she can spend all her time working on rockets!
Posted 8 months ago Report
Link Quote Reply

The Devil's Advocate
@royalbardofequestria93
I don't think Delta would look for any sort of legal help. She cares about Apogee, and taking revenge (or justice) on Jet would also indirectly hurt her as well.
Posted 8 months ago Report
Link Quote Reply
royalbardofequestria93
@AWGear
I still suggest Delta looks for legal recourse, but that'd have to be difficult. And I do think Delta cares about Apogee, she's just sort of…broken.
Actually, the more you think about Jet's actions the more rage inducing they are. He took a fundamental aspect of her biology-the desire to nurture her offspring-and used it as a weapon to control her. Not sure how people defend him.

The Devil's Advocate
@royalbardofequestria93
I don't think that the whole "incest" part is supposed to be cannon.

The story is taken from P-Berry's fic called "Savior". All P-Berry space ponyos comics are supposed to be cannon.

Posted 8 months ago Report
Link Quote Reply
royalbardofequestria93
@AWGear
…He should be shot. Repeatedly. (Also the fact that he's raping Apogee-no, Apogee can not meaningfully consent-or at least taking advantage of her confused emotional state makes him worse. I could imagine Delta walking in on that, her maternal instincts, warrior Pegasus heritage and pure rage at Jet taking over and just flat out murdering him.) Also, where's the story from?
Posted 8 months ago Report
Edited 8 months ago
Link Quote Reply

The Devil's Advocate
@royalbardofequestria93
I don't really think that Delta treats Apogee poorly. Yes, she tends to get a little angry, but she's not being mad at Apogee, and rather just leting the pent up anger towards Jet.

Actually, from what we see of Delta, she's a pretty decent mother towards her daughter. She:
1. Gives Apogee the best that she has in terms of food.
2. Agrees to spend time with her, even tough Apogee reminds her about Jet and how he hurt her.
3. She agrees to meet up with jet on many ocasions, just because Apogee "needs it" even tough that is also pretty painfull for Delta.

The reason why Delta is still living in such poor conditions, is because she refuses to take help from Jet. She was cheated by him twice. First time was when he made her pregnant which led her to stop pursueing her dreams of ever working for the EASA. Then, the second time was when she tought about going back to him, but learned that he has refused to work for the EASA, instead going for building his own company.

Sitting below the bold headline was a smaller block of small printed words, next to a photo of a smug-looking Jet Stream in front of what looked like a wall painted with the logo of EquestriAero.

“No…” Delta whispered to herself as she leaned forward, reading through the article, too aghast to bother putting on her glasses.

The article said something about how incredibly daring her ex-coltfriend’s decision was, that he continued to serve as a prime example of entrepreneurship, and that, while EASA surely must be frustrated about not getting their hooves on such a rising star, the author wished nothing but the best to young Jet Stream on his steep ascend to the very top.

This… this was… ugh!


If she were to accept his help offer now, she would essentially become his "toy" that would have her life being manipulated by him.

The Devil's Advocate
@royalbardofequestria93
I told ya. They weren't "partners" in a legal sense. They were just two lovers who worked on one thing together. There would be no way to prove in such sytuation that Jet "stole" Delta's ideas. Even if she was able to prove it, she didn't "patent" those ideas beforehand. She wasn't expecting Jet to take her work and present it as his own, so she wouldn't have made a preparation in case anypony would want to steal it. It wasn't anything "official" anyway, more like loose blueprints and stuff like that.

There is also the fact that for someone who worked at a fast food at that time, I don't think Delta would have enough money to hire an attorney.

The Devil's Advocate
@royalbardofequestria93
I mean, Delta was picked for the positions since the "slots" were opened. That's when she also got pregnant, so she had to refuse taking the position, so she could take care of apogee for 4 years. In that time, they probably found other bright minds for the team, or just weren't interested in Delta anymore when she could have "go back" to work.
Posted 8 months ago Report
Link Quote Reply
royalbardofequestria93
@AWGear
What happened to the space program? In addition, taking a job at Jet's company really wasn't out of the question if you think about it. She helped design the rocket. By rights, it's hers as well.
Posted 8 months ago Report
Edited 8 months ago
Link Quote Reply

The Devil's Advocate
@royalbardofequestria93
What could she do at that point? She did take on multiple diffrent jobs but that didn't bring her anywhere. Since Jet took her place in the space projects, it's not like she (with her rather "specyfic" education) could apply for work in the "competition" since there was no competition. It took her quite a while to get stuck on the Junkyard, so it's not like she didn't try to get herself other jobs.
Posted 8 months ago Report
Link Quote Reply
royalbardofequestria93
Having Apogee didn't ruin Delta's career. Let me explain. Even if Pegasi culture or biology is such that Delta was compelled to care for Apogee during those first few years, it's been twelve years since she was Apogee's active parent. In that time, she has made no attempt to better her condition. In fact, she lost a job due to getting in a fist-er hoof fight with a co-worker.
The person who ruined Delta's career…was Delta.
Posted 8 months ago Report
Link Quote Reply

The Devil's Advocate
@royalbardofequestria93
Eh, I think she won't sue him at this point for Apogee's sake. Besides, it's not like she has alot of proof or money for a good attorney to win.
Posted 8 months ago Report
Link Quote Reply
royalbardofequestria93
@AWGear
She could technically still sue him-but Delta doesn't seem to want to do anything to better her situation.
Posted 8 months ago Report
Link Quote Reply

The Devil's Advocate
@royalbardofequestria93
She helped Jet desing the rockets while they were in highschool, when it was thier shared project.

This wasn't some kind of "written contract" but a work of two, loving partners who just wanted to do what they loved doing. I guess it's because of that fact when Delta ran away, jet had no obligations to share the money he was making, since for all that everypony knew, the project was all his idea.

those are just pictures silly, not what really happened!