Needs to know Hebrew.
On another subject some time ago I read “The Mane Six Buy Their First Cars”, a fic I found amusing.

(I decided to post again in case someone was replying already.)
Posted 5 years ago Report
Link Quote Reply

Also, don’t get me wrong. I love some models of crossovers. They have just as much a place in the automotive world as any other vehicle segments.
It’s this stupid recent craze that threatens the other segments that I’m concerned about.
Posted 5 years ago Report
Link Quote Reply

I saw one commercial with a girl singing and she nearly rear-ends someone but nope, driving assist stops the car for her. Not commenting other than that.

That commercial and similar ones drive me insane. “Nah, don’t watch or even think about what your doing, the car will do it for you!” No, it won’t. Not consistently enough to be relied on. That’s an emergency system and should be treated as such, just like how an airbag won’t necessarily save your life in a crash. There have even been incidents where a salesman will “demonstrate” that feature by having a customer not brake at a light, but wound up causing a crash when the system didn’t react.

The weird middling level of autonomy cars can have now is dangerous; it works often enough that you stop paying attention, so that when something critical happens, you aren’t prepared to react. Full K.I.T.T.- level autonomy is fine, minimal cruise control level autonomy is fine, but anything in between is a hazard.
Posted 5 years ago Report
Link Quote Reply

As the “new car” idea shifts into something new I suppose it’s only fair for people to wish for something safe to crash in. Still, there are cases of people who drove 1950s cars for decades without incident because they weren’t screwing about and kept the maintenance up and we all know how bad THOSE cars are stock. (not disrespecting, it’s just the nature of those beasts. A list is easily compiled of how deadly it can be to crash in one.)

I get that car companies would like to advertise what they have available and that’s fine. Still, is that literally all they could have considered? And yes, being a good driver can pay off amazingly. I read of a case where a man drove a 1940 Studebaker for 311k since new before retiring it and that was for decades, he then bought a 1966 Studebaker (last year for the company) and ran it for over 500k. Why this is relevant is because (as many know, I’m sure) pre-late 1960s cars are hell on wheels if you screw up in them:

>Most had no seat belts, save for a few offering them as options or parts stores carrying them but even then they were lap only;
>Single master cylinder;
>Drum brakes all around, pre early 1960s;
>No safety glass;
>Steel dashboards;
>Poor door locks;
>Non-collapsible steering columns;
>Fuel pumps that won’t shut off in collisions.

Don’t get me wrong because I like those old cars but recognize their limitations. Still, the worse the car the more alert you may be in order to compensate for it unless you’re being a real idiot. A dual master cylinder + disc brakes all around isn’t a bad modification to a lot of those old cars.
Posted 5 years ago Report
Edited 5 years ago
Link Quote Reply

>No crumple zones
>The non-collapsible steering columns mean that if someone had a head-on the column would, if the driver didn’t move out of the way, go into the passenger compartment and bash them in the face/chest or impale them;
>Some 1950s Cadillacs had a “Bullet” shaped horn button in the middle of the steering wheel which could compliment this;
>The “Bullet” is how singer Sammy Davis Jr. lost his left eye in a collision where two elderly ladies reversed on a highway as he was driving while exhausted (thankfully it wasn’t any worse than that.)
>Reading about this wreck, apparently seats were also framed with steel?
>Body roll was easier in older makes, apparently;
>Bias-Ply Tires, a past commodity which takes skill to know. They do NOT handle the same as Radials;
>Pre-EPA, engine coolant expansion tanks didn’t exist or were rare. This is a safety issue for animals and little kids because they could find antifreeze dripping out of a car radiator and drink it.

Also, if you feel like looking at gruesome fatality photos (something I feel OK with) there’s no shortage of those on the internet. I just saw one in which a semi rammed a two-door 57 Chevy (or similar make) and (description of the mess ahead) the car was struck at the driver side first, the passenger slid forward under the dashboard which then went inward OVER the passenger’s chest and the passenger door popped off and the seat came somewhat out.
Posted 5 years ago Report
Edited 5 years ago
Link Quote Reply

@Flying Pancake
Interesting design for the bed extension though I see Lexus in the grill and the wheels are overdone. Also, are those supposed to be intake vents on the front door seam?

@BarryFromMars
Didn’t cars back in the day have serious issues with overheating too?

Overheating in older cars is something I have little knowledge of. I’ve heard that radiators have come a long way and that new ones work better but that’s just vague speech. It’s no surprise to me though, oil has come a long way too. Back in the day oil was just straight weight and non detergent. Heck, if you go back far enough (pre-1930s) it wasn’t even standardized and viscosity could vary widely!
Posted 5 years ago Report
Edited 5 years ago
Link Quote Reply

@BarryFromMars
Advertising the feature is fine, but they’re advertising it by showing it being misused. It’s like if you were trying to demonstrate that the safety on a gun works by pointing it at your head and pulling the trigger; yes, if everything goes as designed, you’re totally okay, but you’re putting yourself in a situation you should never deliberately be in, and if it doesn’t work, it fails catastrophically.

A better way to advertise auto braking would be showing the car stopping in a situation the driver couldn’t react in time for, like a dog running out in front of it or a driver ahead stomping their brakes with no warning.

@kleptomage
I doubt those wheels would make production, and I wouldn’t be surprised if the grille was adjusted to look more like Hyundai’s others. I do like it the way it is, though.

The door vent things are honestly something I’d never noticed before. From a side or front 3/4 view, they looked like (fake) pressure relief vents, and I never paid attention to them in a front or rear view before. No idea what’s going on there.
Posted 5 years ago Report
Link Quote Reply

Both cars were at 35 MPH. The ’59 was a survivor car, not pristine but they wanted something with structural integrity. I read it did have an engine in it but had the notorious X frame (though what does that count for against it from the front, really?)
Posted 5 years ago Report
Edited 5 years ago
Link Quote Reply

Pomegranates :P
Is it me?
Or are convertibles generally cheaper than coupes?
Posted 5 years ago Report
Link Quote Reply
Scrubbed user

Nope, other way around.

@SeraphimDawn
All other things being equal, hardtops probably hold their value better because a fixed roof has less to break and/or is harder to damage than any sort of convertible. From the factory, though, I’d assume that a convertible would be more expensive, since there’s more that has to go into building it and it’s kind of a “luxury” option.
Posted 5 years ago Report
Link Quote Reply

I used to see consumer level cheap convertibles back in the 2000s and the 90s.
Like Chrysler Sebring. Which is usually a 4 door midsize sedan.
Posted 5 years ago Report
Link Quote Reply

Prison Jumpsuit Lover
@SeraphimDawn
Yep, they are all over the place where I live. it is so much fun to have the top down when there’s only 4 months of the year it is actually good weather to do so…
Posted 5 years ago Report
Link Quote Reply

@SeraphimDawn
Yep, that’s what I was getting at.

I’d completely forgotten about the Sebring convertibles; and looking at them now, they even had a hardtop convertible. Neat.
Posted 5 years ago Report
Link Quote Reply

Remember a time when people with average income were able to afford convertibles?
Posted 5 years ago Report
Link Quote Reply

Pomegranates :P
I find it funny how video games always depict the road and automobiles like as if it’s still the 1970s, even in the 21st century.
Posted 5 years ago Report
Link Quote Reply

@SeraphimDawn
I’ve never cared much for convertibles personally (both from a structural standpoint and because hardtops are more visually cohesive), but for the sake of variety, more convertibles would be cool.

I find it funny how video games always depict the road and automobiles like as if it’s still the 1970s, even in the 21st century.

Not sure what you mean there. Could you be more specific?
Posted 5 years ago Report
Link Quote Reply

@SeraphimDawn
Oh, right. The new Independence Day movie did something similar and spent a good bit of time with a weirdly mint condition 83 Caprice wagon. I guess woodgrain and wagons were just a part of the landscape for so long that it’s almost a subconscious understanding of what “family car” looks like.

Wood paneling really ought to make a comeback, though; Done right it’s beautiful. Honestly, I even like it when it’s done wrong: 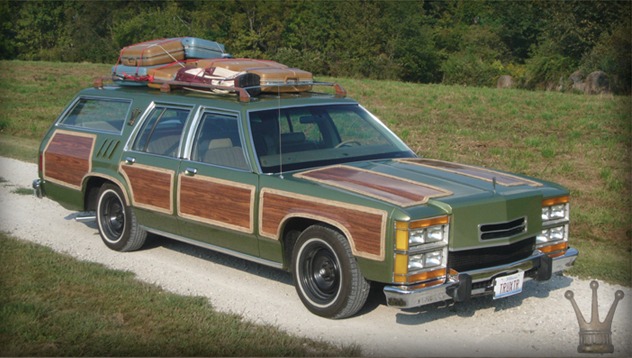