Sweet F.A.
@Mellow Rhythm
The Who Sell Out is a great album! Did you know that “I Can See for Miles” was apparently listed by one publication as the heaviest song released at the time, and was the inspiration for Paul McCartney to write a heavier song with “Helter Skelter”? (Which is, IMO, the first heavy metal song.)
@Mr.Myoozik
It’s a long story, but basically, the band Falling in Reverse had to cancel two or more shows because their laptop broke and they needed it for their live performances. So radio host Eddie Trunk and original Skid Row lead singer Sebastian Bach started crapping on them for it, saying that too many modern rock bands use backing tracks and bands back in The Old Days didn’t have to…
Which is completely untrue, for the record. Some examples:
The Who were one of the first bands to utilize backing tracks in live performances of “Baba O’Riley” and “Won’t Get Fooled Again” back in 1971.
Rush used backing tracks of Aimee Mann’s backing vocals in live performances of “Time Stand Still.”
Queensrÿche used a backing orchestra track on “Silent Lucidity” in lieu of hauling the entire orchestra on tour.
Van Halen used backing keyboards on songs like “Jump,” “When It’s Love,” and “Right Now” since the late ’80s to free up Eddie (who played keys on those tracks) so he could play guitar.
Even Queen used a backing track for the Opera section of “Bohemian Rhapsody”–there was no way they could reproduce those vocals live!
It’s not like the bands using backing tracks are just doing it because they’re lazy or whatever. Nor is it the same as lip syncing, which people are accusing it of being (and of course is almost always unacceptable).
If Falling in Reverse should be shamed for anything, it’s for not making backups of what was on their computer. That’s just basic stuff. The laptop is like an instrument at that point, and any good musician keeps a backup guitar, for example, so if it breaks they can switch and the show can go on.
Posted 3 months ago Report
Link Quote Reply

@Mellow Rhythm
The Who Sell Out is a great album! Did you know that “I Can See for Miles” was apparently listed by one publication as the heaviest song released at the time, and was the inspiration for Paul McCartney to write a heavier song with “Helter Skelter”? (Which is, IMO, the first heavy metal song.)

Indeed I did know! Both songs are certainly instrumental in heavy metal and hard rock’s foundations. Though, Helter Skelter definitely has it beat in terms of true heavy/proto-metal cred. Incidentally, I also count The Kinks “You Really Got Me” as among the first heavy metal song too (in addition to early punk rock). There are other candidates from a few years prior to that, but I don’t need to go into too much detail :P
Posted 3 months ago Report
Edited 3 months ago
Link Quote Reply

@Mellow Rhythm
I quite like that one. A certain scene in the Tommy movie made a lot more sense after listening.
After I moved, I picked up two albums: It’s Hard and The Who Sell Out. It’s Hard is my favorite for personal reasons.
Just a side note about The Who and Metal: Boris the Spider has a reputation among metal fans for containing the first ever metal growl.
@TheHappySpaceman
The biggest downsides of backing tracks were that they didn’t work reliably, and that they made soloing impossible. I’ve heard that the tour to promote Quadrophenia was a disaster for those reasons.
While we’re on the subject, here’s an instrumental demo of Baba O’Riley.
Posted 3 months ago Report
Link Quote Reply

Sweet F.A.
Update: I don’t know why I needed luck. This album absolutely rocks.
We’ll see how it holds up upon second listen, but so far, this is the best album and the closest Skid Row has come to capturing their old energy since Subhuman Race.
Should probably link the album in here, too.
Now, to respond to the old comments:
@Mellow Rhythm
I’d definitely agree with “You Really Got Me” as well! And Jimi Hendrix, though he came a bit later.
@DerpyFast
Love John’s growl on “Boris the Spider.”
And yes, that’s a downside of backing tracks–well, not soloing specifically, but any extended solos or jams would not work with backing tracks. So bands like 1970s Pink Floyd or the Grateful Dead, whose live performances were reliant on lengthy jams in lieu of simply playing the original songs as they were on the album, probably wouldn’t get any use of backing tracks.
Posted 3 months ago Report
Link Quote Reply

Music Connoisseur
@TheHappySpaceman
First: Gross, Falling In Reverse, not my kind of band and I’m not into metalcore.
Second: It just felt like old farts not understanding modern technology and the good that came out of it. Sounded to me like they approached a topic that they had little understanding towards.
Third: I guess it depends on how you use it and not what you use.
Posted 3 months ago Report
Link Quote Reply

💙Glass Sight's Chocopon💙
@TheHappySpaceman
Oh yes, definitely Jimi too!
This song is a bit of a more obscure choice I suppose, but I’ve always considered “You Got Me Floating” from Axis: Bold As Love a heavy metal kind of song. Even more than I’d consider it psychedelic, at that
Posted 3 months ago Report
Link Quote Reply

First: Gross, Falling In Reverse, not my kind of band and I’m not into metalcore.

LMAO, I also honestly think that’s a big reason this band in particular is getting so much flack for it. It’s less about what they’re doing and more about the band that’s doing it–a lot of people find Falling in Reverse cringey (and to be honest, I kind of do too). But still, this is not something they should be getting flack for.

Third: I guess it depends on how you use it and not what you use.

Pretty much. I think Neil Peart put it best in 1980: “All this machinery making modern music can still be open-hearted, not so coldly charted; it’s really just a question of your honesty.”
@Mellow Rhythm
Good choice! A lot of what he did with guitar distortion paved the way for future rock and metal guitarists. The sounds he was making on some of the later albums was even a little prog at points! I do wonder what he would have done with his music if he hadn’t passed so young.
Posted 3 months ago Report
Link Quote Reply

Music Connoisseur
@TheHappySpaceman
I just don’t like metalcore in general and that band’s music doesn’t do it for me. Regardless, if they want to use backing tracks, then there’s no golden rule which states that it isn’t allowed in the music world. It’s just Sebastian Bach acting like an old man who doesn’t like the newer bands.
About Jimi, I’ve heard that if he didn’t die, he was gonna abandon psychedelia and start doing prog rock
Posted 3 months ago Report
Link Quote Reply

About Jimi, I’ve heard that if he didn’t die, he was gonna abandon psychedelia and start doing prog rock

Yeah I heard he was going to join Emerson, Lake and Palmer before he died. Hendrix in ELP probably wouldn’t have worked but it would have been interesting.
Posted 3 months ago Report
Link Quote Reply

💙Glass Sight's Chocopon💙
@angryprogrockbrony
He would have stolen the spotlight from the rest of ELP, no doubt
Posted 3 months ago Report
Link Quote Reply

@Mellow Rhythm
Yeah that would have been awful. Imagine if Keith Emerson, Greg Lake, and Carl Palmer had all just been backing musicians to accompany Jimi Hendrix instead of actually playing their own melodies or rhythms. ELP wasn’t amazing but at least they could play better than rock bands that are just a singer and a few backing musicians.
Posted 3 months ago Report
Link Quote Reply 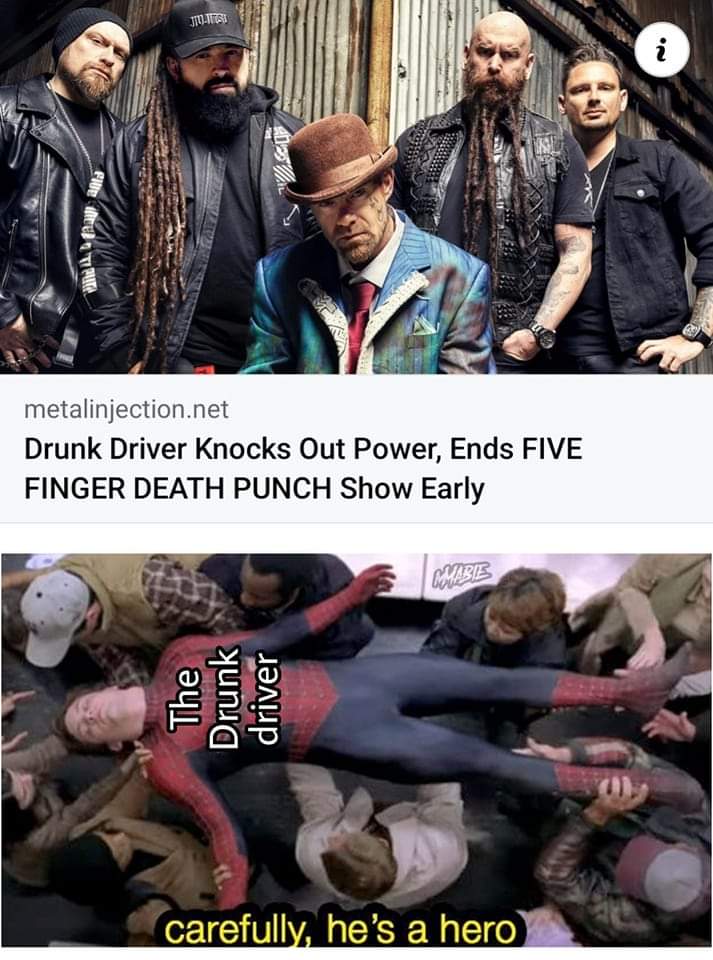 Music Connoisseur
@Khamzat Chimaev
Why do the members look like people who watch Fox News and yell at the TV when they watch CNN?
Posted 3 months ago Report
Link Quote Reply

Sweet F.A.
I hate that 5FDP’s guitarist is named Zoltan Bathory.
That is way too cool a name for someone who’s a member of Five Finger Death Punch.
Posted 3 months ago Report
Link Quote Reply

Music Connoisseur
Congratulations to Glass Animals for breaking the record for most weeks on the Hot 100 with their number one song Heat Waves now on the charts for 91 weeks, beating Blinding Lights by The Weeknd. Good on you, now please leave the chart, you have vastly overstayed your welcome.
Posted 3 months ago Report
Link Quote Reply

💙Glass Sight's Chocopon💙
@TheHappySpaceman
That’s a name that should be more reserved for an extreme metal band - especially considering the band Bathory is already one of those!
@Mr.Myoozik
Agreed about The Weeknd
Posted 3 months ago Report
Link Quote Reply
Interested in advertising on Derpibooru? Click here for information!