collage🏴pirate
@DerpyFast
I wonder if it’s now a case of finishing the story anyway because it was close enough to completion when the flaws were discovered. It seems like the main story should wrap up soon. If not, then it’s the kind of project that drags on for at least four more years as the ramifications of the recent chapters are explored. This is up to the author: sudden “lived happily ever after” ending or more melodrama that treats the subject matter seriously?
Agree with the smart teenager part. The author is self-aware enough to include background jokes instead of being one-note about the main story. Kind of reminds me of Pencils but with less wit.
@Background Pony #9460
Intentional or not, that author is a master at posting bait.
Posted about a year ago Report
Link Quote Reply

Ocs,Boops,Tickles&Memes
@Background Pony #9460
again, i don’t really know a lot about the artist or what they think, all i know si that they used to run a popular NSFW twilight blog on twitter.
Posted about a year ago Report
Link Quote Reply 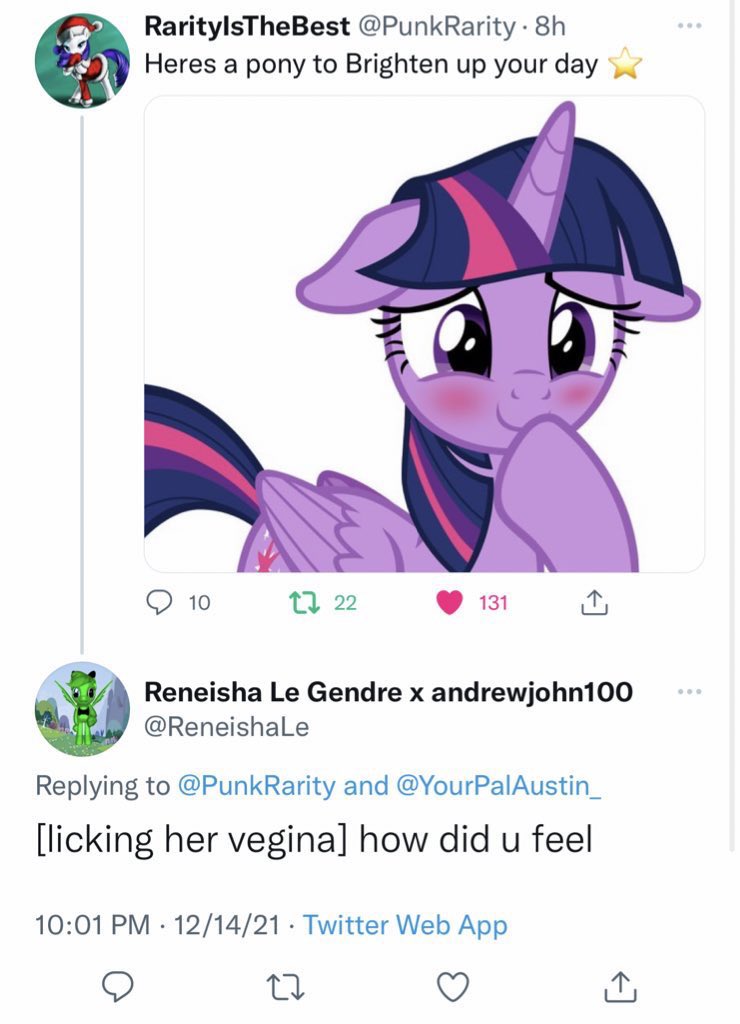 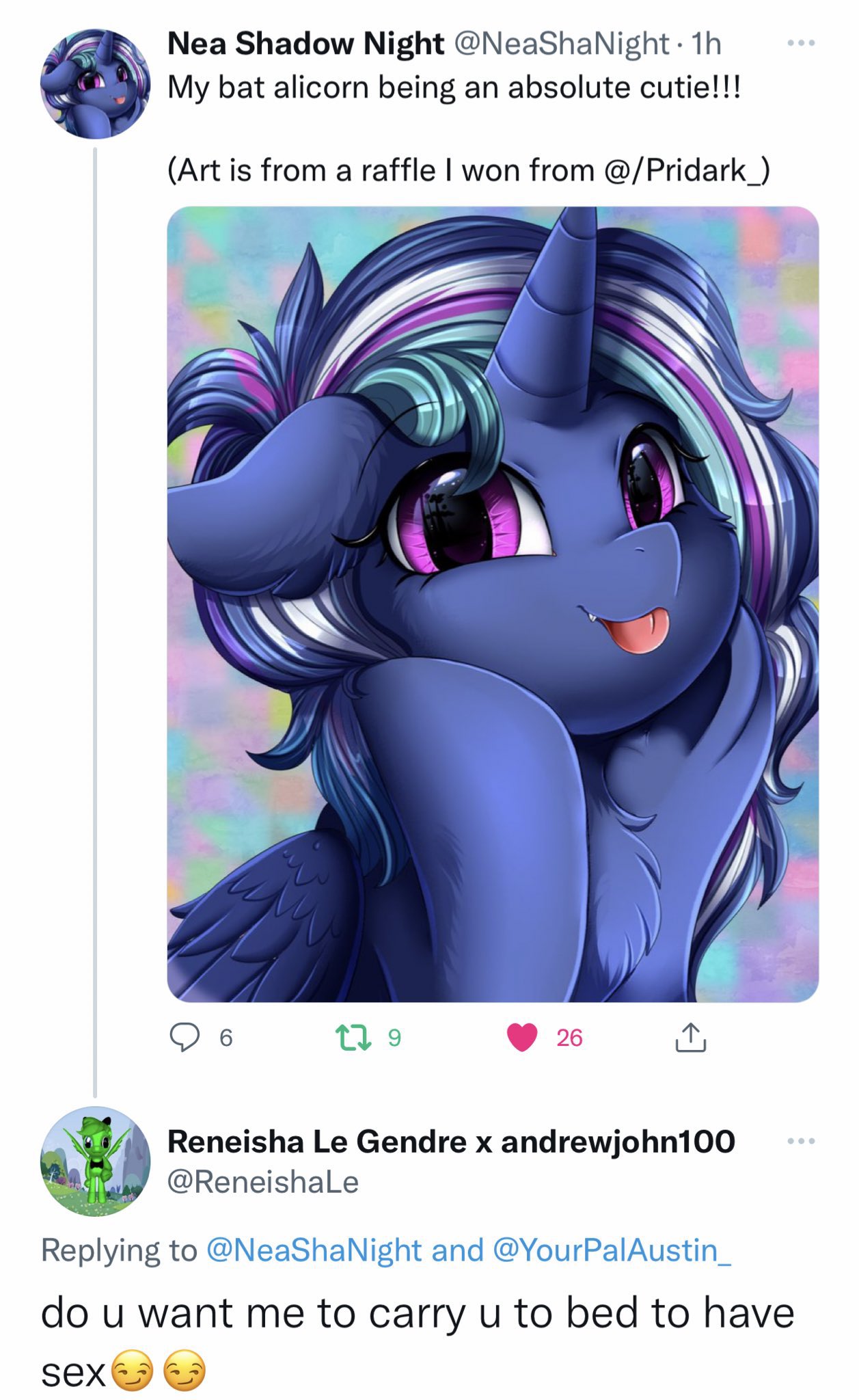 to make things worse, the owner of that oc is a minor…
Posted about a year ago Report
Link Quote Reply

@Background Pony #9460
The comic itself feels like its written by a teenager. But a smart teenager; too smart for his own good. Because that’s the mindset you need to commit several years of your life to a project that doesn’t even have a first draft, and hasn’t been passed off to an editor.
You can tell that this is the case, because the author got a year and fifty pages in before realizing he couldn’t actually do the domestic abuse aspect of Cozy Glow’s backstory properly. It’s filled with things an editor would have caught in the planning stage. I’ve been writing an Abridged parody in my head, and the jokes honestly write themselves.

That, and the fact that the artist, as you said for some reason, then decided throwing in attempted genocide for Chrysalis’ Tragic BackstoryTM was appropriate, despite previously deciding that they weren’t confident about how to handle Cozy’s background with enough grace. It’s highly dubious on if it even fits with Chrysalis’ character, since she seems like the type that wouldn’t let this pass without mention in canon.
you definitely weren’t the only one there questioning that; I was BP posting on that one
Looking at the most recent pages, it’s quite apparent that the issue of the story’s “Stock Abusive/Disappointed Character” is bleeding over into Celestia and Luna’s portrayals, who are frankly acting over the top with dialogue mustache twirly and sadistic enough to give Chrysalis a run for her money, if not worse, it’s so lacking in nuance. If this is actually 100% real and not a fakeout, which I think it is for real, it’s trying to hammer home you siding completely against them, and if you sympathize with them, you’re bad.
Notably, they’re not really trying to argue what risks might be involved, that it’s for the greater good, but instead about what they deserve.
Posted about a year ago Report
Edited about a year ago
Link Quote Reply

@ichiban iceychan 1517
I always find it weird, you say its a minor and all that but makes me wonder: Is the expectation that people check the profile of every person they have an interaction with? I personally never check the profile of anyone (though i also don’t go around leaving NSFW remarks on SFW pictures either).
Posted about a year ago Report
Link Quote Reply
Background Pony #9460
@AC97
https://www.fimfiction.net/story/451525/a-discussion-on-the-benefits-of-murdering-small-children
And here’s his last story on fimfic.

Pomegranates :P
@ichiban iceychan 1517
Some people just don’t seem to adhere to the concept of boundaries do they?
Posted about a year ago Report
Link Quote Reply

collage🏴pirate
There’s some kind of drama going down between Grapefruit Face and one of the mods on Ponybooru. I don’t know who either of those people are nor am I reading through it all to provide a summary. There are plenty of links in the description of the linked post with more drama in their comments.
For that matter, where do we draw the line between cringe and drama? There is obvious overlap as well as pure examples of each without the other.
@ichiban iceychan 1517 @Panko Pai
Now I’m confused. Does this OC have something to do with the fix comic or the horny Twilight blog? It seems that everyone else discussing fix here has been following the drama for a while and already knows what to discuss next. I found out about it within the past week and have no idea just how much offsite backstory there is.
@Seiken
Good point. I was going to ask: are there any other people besides those who haven’t touched grass in a year who actively check the profiles of others?
@AC97
IMO, the important part of that arc was the betrayal, not the attempted genocide. It’s written by someone who knows that they are dealing with serious important topics™ but cannot fully comprehend why they are serious® and important©. He seems like the kind of person who can explain why they’re important but lacks the gut feeling to convey their gravity.
Posted about a year ago Report
Link Quote Reply

Ocs,Boops,Tickles&Memes
@PUBLIQclopAccountant
oc has nothing to do with the fix comic or the person behind it, this is just something completely different
Posted about a year ago Report
Link Quote Reply

collage🏴pirate
@ichiban iceychan 1517
Thanks for the clarification. This thread quickly becomes confusing. Which OC is the one with the cringe and/or drama you’re discussing?
Posted about a year ago Report
Link Quote Reply

@Background Pony #9460
…somehow, I’d blocked that from my memory before you reminded me. I think I’m both impressed and disappointed in myself for doing that.
@PUBLIQclopAccountant

@AC97
IMO, the important part of that arc was the betrayal, not the attempted genocide. It’s written by someone who knows that they are dealing with serious important topics™ but cannot fully comprehend why they are serious® and important©. He seems like the kind of person who can explain why they’re important but lacks the gut feeling to convey their gravity.

Zipp Dripp!
@AC97
The whole “written by a teenager” thing runs even deeper.
Twilight isn’t written like an adult at all. This whole idea that she can just abandon her responsibilities and the adults will pick up the slack, no questions asked, is extremely immature. If I ever make that abridged parody, Twilight’s letter to Celestia will contain the line:

Can you imagine failing to save someone, and then having to live with that? This has been the worst six months of my life!

So, back in Grade 9, I read a book called Magic Kingdom For Sale - Sold!. It was about a Chicago lawyer whose wife died, and he pays a million dollars to basically insert himself into a real isekai story. And even this book I read in Grade 9 talked about the real-life consequences of him running away. Assets were sold at a loss, and his clients had to find a new lawyer. He really burned his bridges by doing this.
Tirek is over 1,000 years old. It seems like all of his problems stem from bad experiences he had as a teenager, and he still hasn’t gotten over them 1,000 years later.
Chrysalis being driven by a sense of duty towards her subjects was really compelling, and it resonated with a lot of people. The Trio are the ones trapped in stone and unable to live their lives, but Twilight has somehow managed to make the whole thing about her. It’s like the author doesn’t grasp that there is a bigger picture out there.
Posted about a year ago Report
Link Quote Reply

It’s a horse cartoon, not some religious text.

My rule of fan works: never put more effort into canon compliance than the actual writer put into telling a coherent story.
Speaking of…
@DerpyFast

Twilight isn’t written like an adult at all. This whole idea that she can just abandon her responsibilities and the adults will pick up the slack, no questions asked, is extremely immature.

Twilight isn’t written like an adult at all in FiM itself. That’s understandable for the first few seasons but later on is yet another sign that makes it obvious that FiM lasted three times as long as it was originally planned for. It’s not necessarily bad if you don’t think too hard, but writing (or discussing) fix fics is, by definition, thinking too hard.
Posted about a year ago Report
Link Quote Reply

Amethyst the God Slayer
Little sidenote about the comments. Someone brought up Tirek’s backstory in the FIENDship is Magic miniseries as an example for how he could be redeemed. I countered and said that the comics weren’t really canon with a few minor exceptions, and they straight-up replied back that they were.
In that case, then that means canonically, Chrysalis slaughtered an entire town of cute and fuzzy animals, even brutally killing one in front of a group of fillies, splat and all.
Oh, but of course Chrysalis is redeemable! She’s just “misunderstood!”
Posted about a year ago Report
Link Quote Reply

World's Okayest User
@Penguin Dragneel
“Tirek’s not a waifu, he can’t be redeemed!”
Posted about a year ago Report
Link Quote Reply
Interested in advertising on Derpibooru? Click here for information!