tinyurl.com/dymbb3a
@tehwatever
Some people are traumatized from reading it for every reason you just described.
All I can say is, there’s a “JoJo ending” that many claim to be the “true canon ending”, if only so she can finally find her happiness.
Posted 7 months ago Report
Link Quote Reply

Returned from the Deep
@Random-Rambling
If I’m not mistaken, Azur Lane gives a subtle nod to Emergence by hinting that one of the ships in the game is actually a rescued Saki. Though that could just be people reading too much into things.
Posted 7 months ago Report
Edited 7 months ago
Link Quote Reply

@Random-Rambling
I finally read the Jojo Ending. I’m happy. It’s canon to me now. This has to be the True Ending that you need to collect all seven dragon balls to unlock or something.
I can sleep easy.

my favorite anime is sailor moon (90s anime), I feel it’s a bit underrated, does anyone else likes it ?

In the US? Yep

what do you mean “by In the US? Yep” ?
Posted 6 months ago Report
Link Quote Reply

Monado User
@QuasarNova
It really isn’t underated in the US. Because it was a large chunk of the 90s pop culture.
Posted 6 months ago Report
Link Quote Reply

Sunny Day Realtor
It’s not because Sailor Moon is underrated or anything, it’s because it barely gets fuckin’ talked about these days. The average person is far more likely to identify Sailor Moon than pretty much any other anime character still, but finding someone to actually hold a conversation with on the topic of Sailor Moon is going to be fucking difficult in the current environment.
And guess what? This is the case for a metric fuckton of stuff, because the current discussion environment in the anime community is so overwhelmingly geared towards what’s currently airing that it’s hard to find people to talk about non-seasonal anime with in general in most places you look. Licensors like Crunchyroll advertise the new, hype shit that’s currently airing and build an interest train in that for western audiences in order to try to pull more and more people to their platform and therefore increase their overhead. In turn, pirate sites try to get more clicks and attention and therefore more shady ad revenue by piggy backing off of the official marketing hype and interest trains and giving those special attention on their own platforms, i.e. front of the line placement. You pull up 9anime or something, and what do you find? Recently updated anime or currently airing anime or whatever they call it, right there as the first thing you’ll see. And when these two elements combine, it’s what people are talking about. People come in looking for new shit to watch, and what are they going to find by looking? The shit that’s fucking plastered everywhere.
Side effect of all of this? Non-seasonal discussion is fucking dying. It’s hard to find people to talk about these things with these days, and even just a few years ago it wasn’t especially difficult compared to now.
You wanna find people to talk about Sailor Moon with? Good luck. I mean it. But it’s not because Sailor Moon is underappreciated, it’s because seasonal anime fanculture has fucking devoured everything else, and Sailor Moon happens to be included in that.
People used to call me the worst kind of weeb in this thread back in the day for disliking the influence and growth of anime in the west and wanting to support the fansubbing scene, and since then, finding people to talk about non-seasonal anime with has dwindled fucking greatly. Community interaction and discussion is dictated by topical relevance rather than personal interest and investment. You know what’s not very topical in 2021? Sailor fucking Moon. And that’s all that matters, marketing hype machines and whether or not you can easily and readily find people to talk about what you’re watching with. Just like all of those seasonals people were talking about constantly when I came back to this thread and have promptly dropped off of the face of the earth because they are no longer relevant.
Anime discussion isn’t dead, it’s just a soulless husk. I find this very depressing.
Posted 6 months ago Report
Edited 6 months ago
Link Quote Reply

b-day Nov 5
@ghostfacekiller39
Look, I get your point but it’s easier to find someone to talk about Dragon Ball than Sailor Moon, they both old anime, that really hurts me because people still want to about dragon ball, but if it’s Sailor Moon they act like it never existed or push it to the sides, just to shove Overrated anime in my face(mainly Attack On Titan, Cowboy Bebop, Bleach, Naurto) that makes me feel isolated.
Posted 6 months ago Report
Link Quote Reply

Monado User
@Background Pony #6CC6
“Ha when you think I was doing Y. I was doing Z.”
Jojo fights. 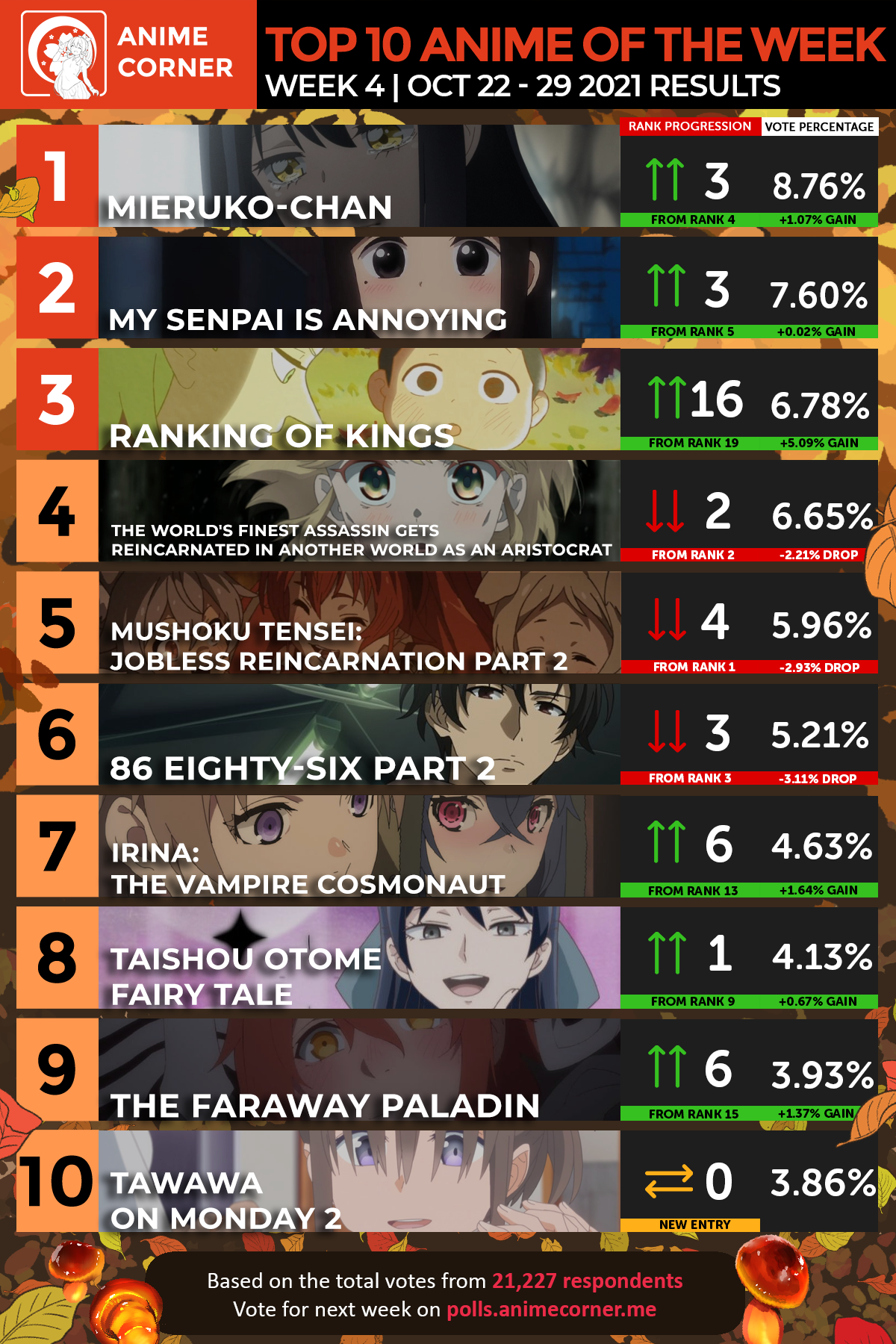 @Holofan4life
Komi not being there is gonna anger the khimps