Monado User
@ghostfacekiller39
Some Dubs do a good job and usually English dubs win about 30%-40% of the time.

Calling it a winless team is an insult to dubs that go over seas too.
Posted 1 years ago Report
Link Quote Reply

Sunny Day Realtor
@igotnopicks
Yeah, dubs win 30 - 40% of the time and I have a cool million resting in my bank account as we speak

Monado User
@ghostfacekiller39
Japanese also Dub Western Cartoons too incase you forgot.
So it’s not all winless as you stated.

Ecto-Phase,Activate!
@igotnopicks
I just remembered the Japanese Boondocks dub. There used to be the Aqua Teen Hunger Force movie in Japanese up on YouTube but it’s gone now. Err was voiced by the guy who did Lupin,I remember.
Posted 1 years ago Report
Link Quote Reply

@DeathCloud
Not in the case with So I’m a Spider, bro. The Dub made the B-plot with Shun etc FAR more interesting. It because you have that playfulness to it, a little more sass, a sprinkle of sarcasm and irony.

In the original, Shun etc is SOOOO GENERIC and played wholly straight it’s unbearable, to the point that I blank out almost every time.

They also added some lines for Kumoko to give her that little bit extra english-speaking nmillennial meme humor to her.

She said “zero stars. would not recommend” when she first activated Detection skill.

DeathCloud
Agent of Shadows
@tehwatever
Checked dub and its sound like another generic dub. Original just sound normal but not to generic

This sound terrible, alone makes me want to not poke it with 2m long stick
Posted 1 years ago Report
Link Quote Reply

@DeathCloud
Then it just comes to taste, really.

I find the japanese dub hella generic. The way Shun inflects his words, and the dialogues…GAH!

So Vanilla! Like plain rice! Like fries without salt! Gimme some spiciness, bro. Some jokes, some attitude, some irony and sarcasm, some self-awareness or something.

While the Dub does sound generic af, I can at least hear that extra bullshit that makes my experience spicier.
Posted 1 years ago Report
Link Quote Reply

I II II L
I wanted to say something about The Promised Neverland as a whole since we’re finally on the last episode. Partly because I know most of the comments are gonna be negative as usual.

I feel like I’ve been one of the few people who has somewhat defended the second season of The Promised Neverland online. Not that I think the second season is good or anything, but I don’t think it’s complete garbage either. I think this season as a whole has its share of good moments in the midst of the bad moments. And I want to voice my opinion because I know most people will just point out the bad.

I will also be pointing out the bad stuff, which there is a lot of.

I thought the first three or four episodes of The Promised Neverland season 2 were of the same quality as the first season. It’s crazy to think back, but the first couple or so episodes of season 2 were really compelling and intriguing. It really did feel like it was building to this huge crescendo.

The animation quality of season 2 was excellent. However you feel about the writing of the series, I don’t think you can criticize the animation. Sure, some of the faces look silly and cartoonishly out of proportion, but I never noticed a step down in animation compared to season 1.

I really liked the stuff between Emma and the demons. One of the things that I felt season 2 really did a good job in building up was Emma and her not wanting to hurt the demons. I thought that was actually well done.

Speaking of Emma, I don’t think she became a Mary Sue like a lot are saying. To me, her character has been consistently written the same way as she was in season 1. Sure, she practically solved all the problems that were occurring, but I don’t think that makes someone a Mary Sue.

I like in theory the character change of Norman. I think him going in the dark side, if written better, could have worked and been very enticing. It had potential, which I’ll get more into.

Lastly, I like the reunion between Emma and Phil in episode 10. That was legitimately a heartwarming moment seeing them hug.

And now we get to all the bad.

The pacing issues in this season is atrocious. So much happens in these episodes and very little feels like it matters. I think the pacing really started to go off the rails with the reintroduction of Norman. From that point on, it’s like we get so many time cuts.

Speaking of Norman, I really don’t like what they did with his character. Specifically, him just deciding out of the blue to not hurt the demons. The conflict of him wanting to hurt the demons and Emma being against it had a lot of potential. But Emma literally told Norman to stop it and he just went “Okay.” Lazy, lazy writing.

I also feel Norman’s new friends were wasted potential as well. Each one of them despised the demons with every fiber of their being. But when Norman has a change of heart, it’s like there’s very little resistance. Instead, they all collectively went “Well, I guess we don’t hate the demons now.” It’s so frustrating because of all the new characters introduced in season 2, I feel Norman’s friends, particularly the one with a bag on his head, has such interesting, unique designs. And they just feel wasted.

I hated— hated, hated, hated— what they did with Isabella. What a waste of a character. To have the entire first season be about escaping from the clutches of Isabella, only to have her become good in season 2, makes it feel as if season 1 was pointless. And the real kicker is Isabella becoming good could have worked. If, you know, THEY ACTUALLY FUCKING BUILT UP TO IT! Isabella turned good with nothing to hint at her turning good. It literally came out of nowhere. Of the things that happened in season 2, this is the one that left a bad taste in my mouth. I’m an amateur writer, and even I could have written something better than that.

Lots of scenes where it’s a bunch of talking and not much action. I can’t criticize this too much because in my light novels that I’ve written, I have a lot of scenes that involve dialogue. But I kinda feel my dialogue heavy scenes and the way this show does it are vastly different. With my scenes, it’s done to express the characters emotions and further advance the plot by increasing the tension and the drama. With this show, they explain key plot points through dialogue, instead of just showing you it firsthand. This show is very guilty of violating the “show, don’t tell” policy, and is one of the main reasons why people don’t like this season.

Lastly, let’s talk about how convenient everything feels. The main criticism I’ve seen thrown at this show is that everything gets dealt with very conveniently. And honestly, it’s easy to see why. Isabella redeeming herself with little to no reason given, Norman having a change of heart, the demons being able to regrow limbs by drinking blood, a lot of this feels less like “Oh, this makes sense” and more “Because the plot demands it,” like it’s some kind of deus ex machina. The thing that frustrates me the most about this is that they could easily take the time and explain these things. And yet sadly, they choose not to. They already spend half the fucking episode doing nothing but dialogue, but God forbid they explain any of the lingering plot holes.

Overall, I rate season 2 a 6 out of 10. I understand why this season is getting maliciously destroyed, but I do legitimately feel there are some good ideas in it. The first 3 or 4 episodes are great, the stuff with Emma and the demons is legitimately compelling, and I like the idea of Norman going to the dark side. It’s just the show can’t put it together. It’s like the show has all the pieces to the puzzle, but they can’t form the pieces together. As such, you’re left with a show with a ton of wasted potential. A show with a ton of good ideas, but no way in which to execute it.
Posted 1 years ago Report
Edited 1 years ago
Link Quote Reply

DeathCloud
Agent of Shadows
I dropped Neverland, almost never do that when I pick show but what they did with s2 is going to far
Posted 1 years ago Report
Link Quote Reply

@ghostfacekiller39
Japanese also Dub Western Cartoons too incase you forgot.
So it’s not all winless as you stated.

Hollow and Cold
@tehwatever
Already? Everyone was saying it was gonna take forever.
Posted 1 years ago Report
Link Quote Reply

Apparently in the original web novel it takes some 200 chapters before Kumoko gets to see the sky.

Of course anime can speed through literally tens of thousands of words in a few episodes. It’s not unusual for a 1 cour anime to go through 3-5 volumes of light novels.

@WyrmSpawN
she just fought a real strong dragon and at least the episode IMPLIED that she’s headed out. Unless that’s just another part of the labyrinth…
Posted 1 years ago Report
Link Quote Reply

Constant Lurker
@WyrmSpawN
They skipped some things to make it go faster. I haven’t got far enough into the light novels to see what if anything of Shun’s story got skipped, but there was some parts from Kumoko’s in the manga that I wish they put in.
Posted 1 years ago Report
Link Quote Reply

⌜Ω⌟
So… I was planning to watch Promised Neverland this weekend, but I saw a tweet with a pic claiming that sole pic was pretty much an entire arc worth from the manga.

Also, I keep hearing it got bad…

What do?
Posted 1 years ago Report
Link Quote Reply

Give it a watch regardless

If bad, read the manga instead
Posted 1 years ago Report
Link Quote Reply

These women have excellently questionable taste which I would not question. 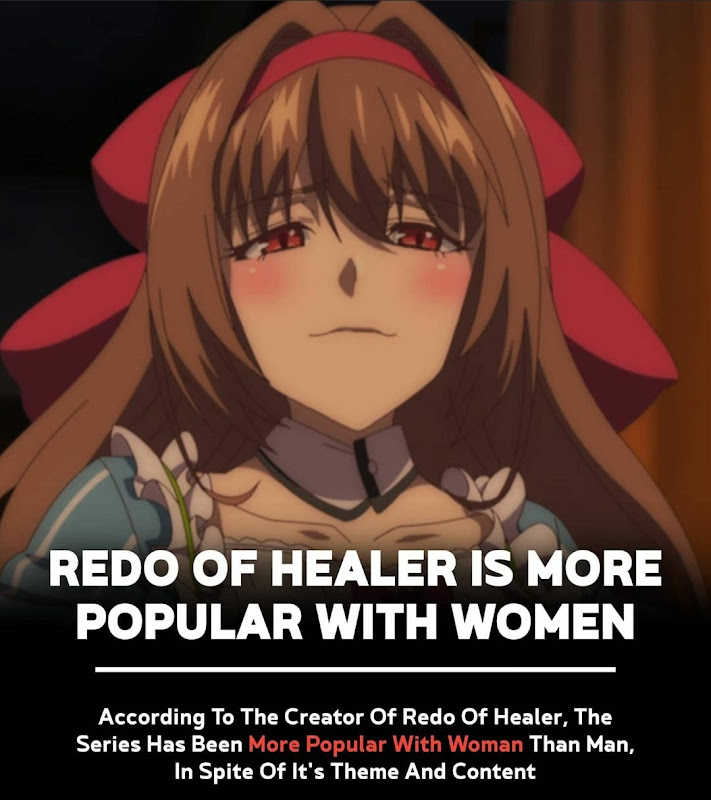 Some of the first questions Imma ask my hijabi girlfriend (if I had one) would be: Do you like Redo of Healer? Where we go from here depends on the answer.
Posted 1 years ago Report
Link Quote Reply
Interested in advertising on Derpibooru? Click here for information!