Generals » Gun Discussion Search Posts
Started by Background Pony #D758
Posted 9 years ago
3238 replies
Subscribe
Background Pony #5252
@Beth
No. The Liberator was all plastic (save for a firing pin made from a nail I think), while FGC-9 has a steel barrel and bolt. This significantly increases longevity. I’m not sure how long it lasts, but I’d guess few hundred to few thousand shots before something breaks.
Posted 3 months ago Report
Edited 3 months ago
Link Quote Reply

Nightmare E-Soldier
@Background Pony #5252
Yeah. The highest energy density is right where the firing pin strikes the primer. Then it rapidly expands out, and weaker material can handle it.
Basic engineering, but i’m an airhead so it took me a bit to figure out.
Posted 3 months ago Report
Link Quote Reply

Zipp is g5 BP
@Beth
The rough mean-time-between-failures is around 3,000 rounds, and that’s more due to barrel and spring wear than anything to do with the receiver, fire-control group, or furniture.
Put it this way: it would last about as long in a normal extended firefight as any other gun.
Posted 3 months ago Report
Link Quote Reply

Today I learned that Double Barrel Shotguns are the kings of diplomatic immunity.
Posted 3 months ago Report
Link Quote Reply

@CaptainXtra
I cannot help imagine a war where every soldier is elmer fudd.
Posted 3 months ago Report
Link Quote Reply

CaptainXtra
PUNCH A FASCIST!
So, when did Flamethrowers become a thing?
Like who finally decided to weaponize fire in a machine?
Posted 2 months ago Report
Link Quote Reply 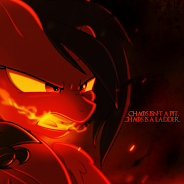 Nightmare E-Soldier
@RustleRustle
Enemie: Has armor piercing ammo
Me: Walking around with a heavy gas can on my back.
Sounds pretty metal.
Posted 2 months ago Report
Link Quote Reply

Floofy & Friendly Plone
@RustleRustle
Omg Ahoy, I love his videos, that guy can talk about a leaf of bread and make it sound epic.
@CaptainXtra
From what I know, ancient flamethrowers were around 10 AD and 7AD, by the Chinese and Byzantine Empire, respectively. But modern flamethrowers were designed by Germany in WW1, and they were used since then (Though in contemporary times they’re seldom seen)
@Beth
Actually, from what I’ve read around, a flamethrower operator was not so much in danger of being turned into a crispy bacon when their flamethrower fuel tank was hit. If I remember correctly, even if a bullet pierced the fuel tanks (Which were quite sturdy to begin with, thick walls and their cute cylindrical shape), they just would have the fuel leaking from it, like a gallon of water would do if you poke a needle on it. Aside from that, very few bullets could actually manage to conflagrate the substance inside; from what I know, only machineguns and things like anti-tank rifles had incendiary properties (For machineguns the tracer mixture I think), gasoline has a 530 degrees Fahrenheit ignition point, 80 degrees more than paper, and regular bullets couldn’t reach that temperature even when piercing. Aside from that, the fuel mixture flamethrowers that were generally used didn’t really lit up unless it reached the ignition method at the tip of the barrel.
As for the pressurised gas tank that propels the fuel mixture out of the flamethrower… Well… I think Mythbusters tried piercing a pressurised gas tank (A regular one, not a flamethrower gas tank), with uneventful results, so my best guess it’s that it would just hiss out the gas (Though I believe that it would probably propel you forward hilariously, or atleast, make you fall face first, by Newton’s third law). To not mention that the pressurised gas was non-flammable nitrogen or even air, which doesn’t really deflagrate as far as I know. Having said that, there was the chance of the gas tank exploding like an aerosol can when ruptured, which would probably be very bad for you.
Although, even though it was hard to make a flamethrower explode, I’m kinda sure it would be quite awful if fuel starts leaking from behind you while you also have the means of lightening that same fuel in your very hands. To not mention that the flamethrower role was extremely dangerous mostly because of your job requirements; having to get close, very close to the enemy, isn’t something that most soldiers want, and of course, no one wants to die on fire, so the moment they spot a flamethrower they’ll gonna leave him like Swiss cheese with concentrated fire, that’s one of the reasons the Russians made their ROKS-2 flamethrowers to be resemble the knapsack used by regular soldiers, and the muzzle was vaguely shaped like a Mosin-Nagant, so they would blend between the other soldiers. 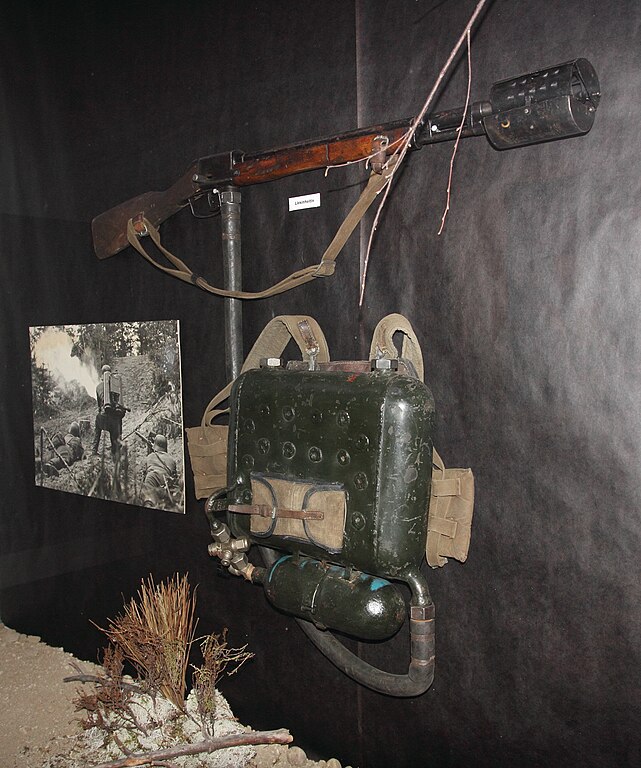 Sorry, flamethrowers are my favourite weapons . I so wish to have an XL18 flamethrower… And I’m not a pyromaniac… Honest!
Posted 2 months ago Report
Link Quote Reply

Pomegranates :P
It seems a number of militaries around the world are shifting back towards the more traditional assault rifle configuration from the bullpup. I take bullpups have certain inadequacies?
Posted 2 months ago Report
Link Quote Reply

Nightmare E-Soldier
@FliegerFaustToP47
It’s cool to learn the physics behind it.
Yeah I think its fear factor screwed it in the end, alongside making the soldier much heavier, and obviously brighter.
Posted 2 months ago Report
Link Quote Reply

3-3/4" Army Man Fan
@ЅℰℒᎯℙℋℐℰℒ
They tend to be very back heavy and have a heavier trigger pull. Traditional style rifles have a more balanced center of gravity.
Posted 2 months ago Report
Link Quote Reply

Zipp is g5 BP
@Zerowinger
They also tend to be harder to design to accommodate off-hand and left-handed shooting, especially if you also want to use standard STANAG mags.
Posted 2 months ago Report
Link Quote Reply
Background Pony #5252
@Beth
The reason flamethrowers disappeared is short range.
The problem is “these guys are way over there and I want to set them on fire”. “Approach them” is not a great solution. A better solution is “shoot incendiary or thermobaric projectiles at them” and this is what modern militaries do.
Posted 2 months ago Report
Link Quote Reply

Floofy & Friendly Plone
@Beth
To not mention the short range. Sure, they weren’t that short ranged compared to how media (Especially videogames) portray them, with those weapons being depicted with a couple meters range when they actually could reach from 40 to 70 meters the most modern ones, but even a submachinegun could reach around 120 to 180 meters of maximum effective range.
Having said that, the People’s Liberation Army still uses them, a Type 74 flamethrower in ‘action’, derivative of the Russian LPO-50.

Today I learned that Double Barrel Shotguns are the kings of diplomatic immunity.

I don’t know how well/horribly this aged… 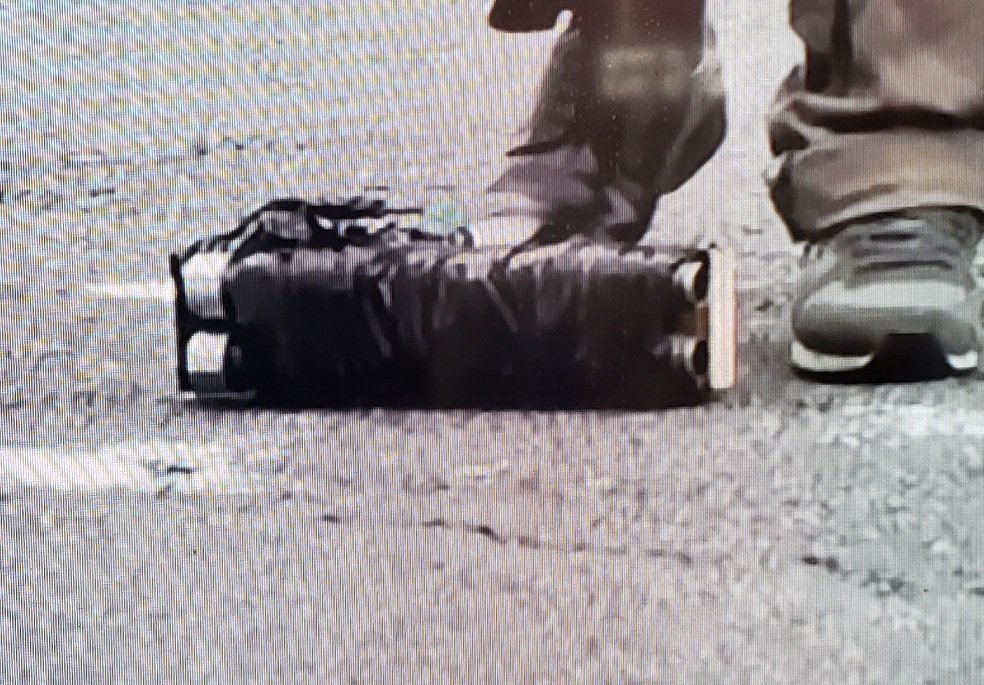 Zipp is g5 BP
@CaptainXtra
NGL some of his other constructions are pretty neat: 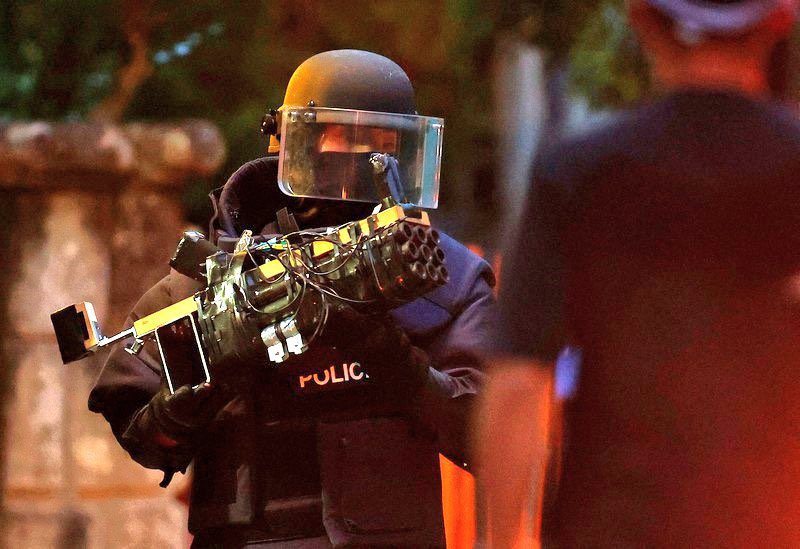 It’s like Fallout 4 meets Cyberpunk 2077.
Posted 2 months ago Report
Link Quote Reply
Background Pony #5252
@Ebalosus
The 9-barrel one seems to have a smartphone mounted. I guess there really is an app for everything.
I’m surprised, but also glad, that in the age of modern DIY guns like FGC-9, criminals still build crude blunderbusses. And that’s with access to the internet and enough time, resources and brain to make actual explosives (reportedly there were explosives in his apartment). Unfortunately it seems like even these crude shotguns are good enough for crime.
EDIT: I’d also like to point out that he didn’t even bother with getting a shotgun legally, which is possible in Japan. He could put in the effort and time to get a license, he just preferred to spend them on a blunderbuss.
Posted 2 months ago Report
Edited 2 months ago
Link Quote Reply

Nightmare E-Soldier
It’s probably easier to rig 9 barrels with electric primers than make a homemade autoloading mechanism. If that’s what I’m looking at.
I want the schematic for that gun, it looks absolutely delightful. Maybe the phone tells the gun what chamber to fire.
Posted 2 months ago Report
Link Quote Reply

CaptainXtra
PUNCH A FASCIST!
So how truly useful are Burst Rifles or at least Burst Modes on Rifles for Soldiers and SWAT?
Why go with that over Full Auto or Semi for situations that would warrant use of them?
Posted 2 months ago Report
Link Quote Reply

Floofy & Friendly Plone
@CaptainXtra
Oh, oh, oh!
A friend (Who I won’t say any name, because it’s a private conversation) once gave me an explanation of that, well, kinda.

…Just, there’s not much point. Full-auto burns ammo so quick that it’s less dangerous than semi-auto unless it’s something like a belt-fed machine gun. Like, an M16 fires 950 rounds per minute, so 16 bullets a second: you’d empty a 30 round magazine in 2 seconds. Heck, the modern-day US Army uses modified M16s that don’t even have full-auto anymore, but have semi-auto and three-round-burst.

Zipp is g5 BP
@Background Pony #5252
For the reason he built the gun that killed Abe, it performed exactly to specification. I mean, it makes a lot more sense than either a high-powered rifle or a pistol, especially if you need to be discrete.
@Beth
The non-gender-specific individuals over at the [3D-printed gun] labs are already working on replicating the double-barrel version to see how it compares to the latest and greatest designs of 3D-printed guns. The 9-barrel monstrosity will take time, because A) it’s likely that he didn’t document the design, and B) even if he did, the Japanese police sure-as-shit aren’t going to release it for use to peruse. It’ll involve a lot of guesswork to rebuild it, but it should be very doable.
@CaptainXtra
Burst mode has always been a crutch for training, and it only used when they either don’t want to spend the money on ammo, or can’t afford to spend the money on ammo, to train [whomever] in utilising full auto mode. It takes an awful lot of practice to git gud at full auto marksmanship.
Posted 2 months ago Report
Link Quote Reply

Chaotic Evil
Any Hollywood Gun Myths or Tropes that pisses you off still?
Posted 2 months ago Report
Link Quote Reply
Interested in advertising on Derpibooru? Click here for information!