Generals » Don't blame me, I voted for the other guy. (Politics General) Search Posts
Started by Archonix
Posted 4 years ago
122921 replies
Subscribe

OH COME ON! That’s a low blow! Watch where you’re shooting–I thought you’re good at this?!

I thought you guys are the most moral army in the world (according to PragerU)!

I expect this kind of bull from Hamas, I don’t expect it from the strongest military in the region by far and the only democratic shining beacon of western enlightenment and excellent morals in the middle east!
Posted 6 months ago Report
Link Quote Reply

Latecomer
@tehwatever
There’s a limit to precision when bombing such a dense city where all the actual targets are hidden. (Which is why, of course, you really shouldn’t do it as long as there’s any more reasonable option.)
Posted 6 months ago Report
Link Quote Reply

@Latecomer
There is a more reasonable option but they decide not to. Look it’s no secret that both factions want to strike fear into the others. It’s no longer “oh uh but I need to defend myself” it’s already a matter of “imma beat the shit out of you.” I mean, if you weigh these options:

death of hamas personnel but destruction of FUCKING HOSPITAL vs hamas escapes but hospital is running, and you decide “well, their problem. I just want Hamas dead” then it’s no longer self defense. it’s intimidation, it’s flexing.

I’d RATHER Israel openly say in CNN or MSNBC or BBC flat out that “yeah fuck these guys they dirty anyway” because that’s what Israel say in less public scenes, anyway. Stop trying to do gather sympathy or play the antisemite card because it’s getting boring.
Posted 6 months ago Report
Edited 6 months ago
Link Quote Reply

Latecomer
@tehwatever
Boring, but marginally more effective than honesty. Politics is all about saying the right things to the right people - and not saying them to the wrong people.
Posted 6 months ago Report
Link Quote Reply

Unfortunately their obsession with getting themselves killed is being done with a contagious disease, so people who don’t want to die is gonna die with them.

Qaren, after her week long nation touring date with PizzaGaetz, throws a hissy fit over the proposed commission to investigate the Jan 6 insurrection. Also she randomly Whataboutisms BLM to deflect.

This woman is unwell. That’s basically the central theme to her near weekly outbursts at this point.

Part-time Pizza Cat
The most asinine belief I see from conservatives is this belief that someone else’s progress is inherently detrimental to them.

A lot of Republicans counter that fast food workers are mostly teens and retirees. This is false, of course, as the average age of minimum wage workers is actually 35, but lets analyze their statement at face value.

To them, it somehow inherently devalues their own work/job/life, or it devalues the system as a whole. Same thing with gay marriage. They see it as somehow being a threat to the concept of marriage, and to their own probably very fragile and loveless marriage to their cousins.

If every fast food worker in the US started making 50k a year, the very worst that would happen would be the cost of your Big Mac going up a bit, despite the fact that it wouldn’t need to as the company could easily eat the cost.


The emphasis on cost cutting that started in the 80s has been the worst thing to happen to strategy theory…other than Six Sigma.
Posted 6 months ago Report
Link Quote Reply

CaptainXtra
El Paso Resident
Pro-Trump Republicans claim that the rioters were Antifa while at the same time claiming they were also normal visitors.

“ShimSham my GlimGlams”
@Zincy
Exactly! Think of the Big Macs! I refuse to live in a world where that junk is more expensive! /s
Posted 6 months ago Report
Link Quote Reply

The most asinine belief I see from conservatives is this belief that someone else’s progress is inherently detrimental to them.

Honest question here, but you do realize that the left believes the same thing, right? That’s where the idea that capitalism is a zero sum game comes from. It’s why politicians use Bezos making a profit during Coronavirus as a quick phrase to illicit emotion.
Posted 6 months ago Report
Link Quote Reply

Monde de merde
@Background Pony #F447
Except, when it comes to wealth repartition, it has been proven time and time again that excessive inequality (especially when it comes at the expense of the middle class) is detrimental to society as a whole.
Wealth doesn’t trickle down, it gets hoarded by the super-rich and the rest is all the poorer from it.

Monde de merde
@Background Pony #C1E8
Capitalism isn’t quite a zero-sum game though: economic growth could benefit everyone (it once did, back before the 80s and the neoliberal revolution), even if the rich get a slightly larger piece of the pie.
That’s not how it work in the current system though: those at the very top keep nearly all the pie and the rest are left with the crumbs. 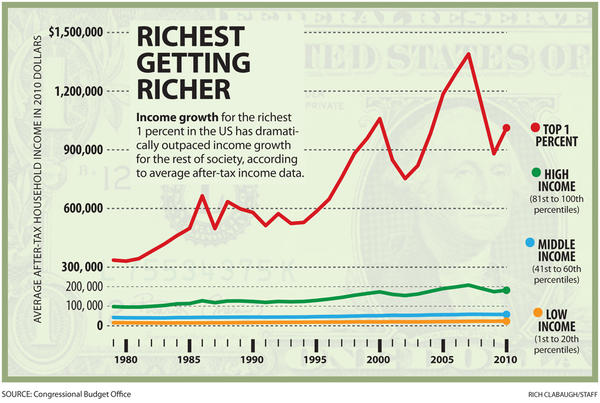 Posted 6 months ago Report
Link Quote Reply
Background Pony #C1E8
@Ereiam
That’s a separate argument regarding what kind of inequality is acceptable, how much of a focus we should have on economic growth, how much focus should be different wealth brackets. My point is what we both agree on, that capitalism, and our system, is not a zero sum game, even if the wealthy have a disproportionate portion.
Posted 6 months ago Report
Link Quote Reply
Background Pony #1F81
The US Capital police have released an official statement saying that they are disappointed in congress and in McConnell and McCarthy for continuing to downplay the events of the Capital riots and for not doing anything to look into the riots or give anything to compensate the officers affected by it

CHS, Class of 20XX
@Background Pony #1F81
Not the USCP. “Members” of the USCP, using official letterhead in what is undoubtedly a breach of protocol.
Posted 6 months ago Report
Link Quote Reply