Generals » Don't blame me, I voted for the other guy. (Politics General) Search Posts
Started by Archonix
Posted 4 years ago
131220 replies
Subscribe

Geissler at the mine
@Zincy

@Dustcan
Giving immigrants credit cards sounds like peak capitalism to me, honestly.
“Here, have this personal debt machine and use it to buy our shit while you’re here.”.

Sounds like the next logical stage of finance capital to me.

It’s like we really do be entering Walter Benjamin hours. There’s no one here willing to stop this god damn train so we can walk out and switch tracks before it’s too god damn late.
Posted about a year ago Report
Link Quote Reply

And even if it were true, which… it’s on Tucker, so… giving that money to an undocumented immigrant does more to stimulate the economy than giving it to some billionaire fuck, as the GOP would have it.
Posted about a year ago Report
Link Quote Reply

A sitting US senator is now bemoaning about wages being too high. Before you ask, he’s GOP. Of course he’s GOP.

Let’s walk through this one. He begins by of course whining about how it pays more to not work than it does to work.

“Unemployment benefits are not meant to provide replacement wages,” Johnson insisted. “That was provided during COVID when it was nobody’s fault that they were losing their job or they were being encouraged to stay home so they wouldn’t spread the disease.”

To the surprise of everyone, the guy interviewing him pushed back. I know right? He point out how low wages and high costs means there’s basically a net 0 in women working instead of taking care of their own kids.

“What about the argument that this situation is kind of shining a light on some of the out-of-control costs,” Bayatpour said. “The increase in costs that wages haven’t kept up with for folks like – things like childcare. A lot of women are choosing not to go back into the workforce right now because at the end of the day it’s a complete wash. Their wages would simply cover the cost of having to pay for childcare that they don’t have to pay for now.”

So naturally the sitting Congressman paid hundreds of thousands a year in your tax dollars and mine starts reeing about paying the plebs for their labor, starts crying about the poor destitute 1%ers, and about ~ Free Markets ~ crap.

“Businesses pay what wages they can afford based on the competitive situation, whether it’s in a restaurant, whether it’s in manufacturing, where they’re competing against foreign manufacturers,” the senator said. “I just have greater faith in the marketplace setting appropriate wage rates.”
“But there’s no doubt about it, wage rates are now being bid up because there is a labor shortage and if you’re a worker that’s a good thing,” he added.
Johnson then spoke about the “downside” of higher wages.
“Commodities go up and down and you can have a temporary increase in prices that are coming back down, whether it’s gas prices or lumber prices,” he explained. “Increase in wage rates ratchet up and that creates permanent inflation so you may feel good about getting a 5 or 6 or 7% raise but if general inflation is 6, 7, or 8%, that increase is just completely wiped out. That’s what the marketplace does.”

Finally the big boy caps it off by being so proud he gets to use a new word he heard before!

“I am highly concerned that what we’re looking at right now is a witch’s brew with all the ingredients for stagflation,” Johnson concluded.

As I said before, there’s something wrong with the fact that we live in a system where it pays more to not work than it does to work. And I’ll further that thought by saying there’s something more wrong about the solution to that being to make it less profitable to not work instead of working instead of the other way around.
Posted about a year ago Report
Link Quote Reply

Increases in wages do not create inflation, and this guy needs to go back to econ 101.
Posted about a year ago Report
Link Quote Reply

Monado User
@NitroFury
There are always those people.
Posted about a year ago Report
Link Quote Reply

Latecomer
@NitroFury
A country that’s spent most of it’s life on the defensive (and inherited a much longer cultural history of victimhood) but suvived and even prospered by being too tough to mess with (and having a big backer)? Really, it wouldn’t be such a surprise even if that wasn’t a global trend lately.
Posted about a year ago Report
Link Quote Reply 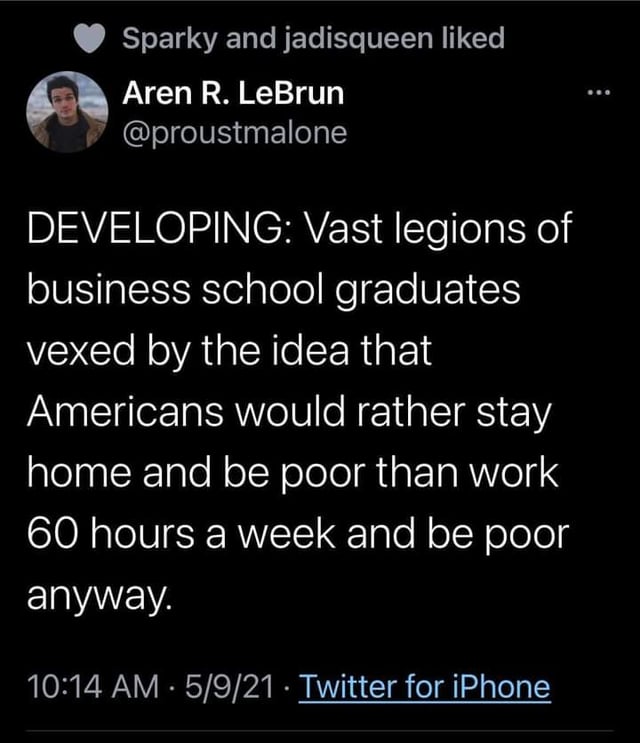 I don’t know Scoob, but this sounds like a mystery we’re never gonna solve.
Posted about a year ago Report
Link Quote Reply

Applebees is offering a free appetizer with every job interview.

They really are doing everything to hire people except paying them for their labor.

It frustrates me to no end. This asinine obsession with cost savings.

Geissler at the mine
Hey guys: if you’re working and tired of your pay n’ shit; now would be a good time to make demands. What’s your boss gonna do, replace you? Go get that 30$ an hour.
Posted about a year ago Report
Link Quote Reply

(Foil Hat)
@Zincy
I still think it’s the natural consequence of having both Aversion Loss and Simian Hoarding Instinct/Tactics (S,H.I.T.)
Posted about a year ago Report
Link Quote Reply

“ShimSham my GlimGlams”
@Zincy
Viva Austrian economics! Does that trigger you, libs? smug
Posted about a year ago Report
Link Quote Reply

You’re not wrong that those are factors, at least loss aversion, but it’s more complex than that.

It’s source is a fundamental misreading of “growth”. If you cut 5% of your spending, your company has not generated 5% additional revenue nor grown an additional 5%. But, it looks like you have, and it hits up that aforementioned monkey brain with a good short term gain.

Geissler at the mine
@Zincy

And I think the two of us know there is no where else to sell to, besides China. And the Chinese know that. They know they’ve been the pot of gold at the end of the rainbow for commerce for over a hundred years.
Posted about a year ago Report
Link Quote Reply

A lot deflection about raising the minimum wage means inflation. Their go-to is that “Big corporations will raise the prices on everything is they know people have more money!” or “If business have to actually pay their slaves then they’ll increase prices to offset costs!”

Nevermind that’s the only time the buck is passed away from corporations, over in say Denmark the minimum wage is the equivalent of $22. What does their McDonald’s charge to offset their minimum wage being almost 3 times as much in America? About $.75 more.

I might have slept through math class so someone will need to tell me if paying less than a buck more for a cheeseburger outweighs almost tripling your income.
Posted about a year ago Report
Link Quote Reply

“ShimSham my GlimGlams”
@Dustcan
It is to those who view a loss of x amount to be more impactful than a gain of the same.
Posted about a year ago Report
Link Quote Reply

The idea that raising minimum wage would lead to companies out pricing their clients is hilarious.

Who else are those companies going to sell to? At the end of the day, they’ll do what they need to do to survive. Any company that would sink itself on greed or principle deserved to die anyway. A new one will take its place.
Posted about a year ago Report
Link Quote Reply

There’s also the point that places that raised minimum wage actually saw an increase in profits as well as the creation of more businesses.

Points that make sense when you work it out. Established businesses would so an immediate hit to their profits as they now have to pay their employees. But what happens when people who previously did not have disposable income do when they finally have disposable income? They spend it. Henry Ford figured this out over century ago. Despite paying his employees more than his competitors he saw higher profits since those same employees started buying his own cars.

And what also happens when finally accumulate some decent wealth? They start their own businesses. A fact that should excite all those “Free Market” and “Competition” wonks as now there would be actual competition.
Posted about a year ago Report
Link Quote Reply

Constant Lurker
@Dustcan
The problem is that current businesses can go under. Yes, the big ones can easily eat the cost; but a lot of mom and pop stores don’t have the money lying around to pay for a sudden jump in wages. Especially when we haven’t fully recovered from the Covid economy. I’m worried that in the short term, people will be forced to do more business with big business.
Posted about a year ago Report
Link Quote Reply

So your solution is what? Keep people wage-slaved and working multiple jobs just to make ends meet? Force them into collegiate debt to fill ever decreasing office jobs? Stand idle while quantity of hours worked goes up while wages stagnate and quality of labor drops?

The free market has shown that it refuses to keep up with living cost.

Those small businesses will be just as fucked if people start getting priced out of their living areas due to rising living costs and stagnation of wages. This is already happening in some areas, mind you, where clientele dried up and the businesses with them.

Something has to be done and no solution is perfect. But I support the one that will do the most good for the most people, and raising wages is just that.

The way we’re doing things is unsustainable, and something needs to change before several generations of workers are drug down.

You may be happy being a minimum wage-slave stuck working 2 or 3 jobs to keep death away for another month, I’m not.

Geissler at the mine
if small buisiness owner’s income is so important why don’t they just join the electrician and pipfitter’s union and end up at a job where they’d make as much if not more than they were before and not have to pay a highschooler 7.75 an hour or whatever
Posted about a year ago Report
Link Quote Reply

@Goku Black
So your solution is what? Keep people wage-slaved and working multiple jobs just to make ends meet? Force them into collegiate debt to fill ever decreasing office jobs? Stand idle while quantity of hours worked goes up while wages stagnate and quality of labor drops?

I don’t like those anymore than you do, but why was the majority of that vitriol directed toward me? It was Natry who brought up the plight of the small businesses. Shouldn’t he have some of that vitriol, too?
Posted about a year ago Report
Link Quote Reply
Interested in advertising on Derpibooru? Click here for information!