Generals » Don't blame me, I voted for the other guy. (Politics General) Search Posts
Started by Archonix
Posted 5 years ago
135587 replies
Subscribe

@CaptainXtra
Same restrictions and requirements as any full auto weapon.

IWTCIEM
@CaptainXtra
Why are we going down that route? Miniguns belong on the battlefield and shouldn’t be allowed for average civilians, period. But I’m sure gun nuts would advocate that.
Posted 2 months ago Report
Link Quote Reply

CaptainXtra
PUNCH A FASCIST!
@IWTCIEM
I’m just pondering how the hell one can legally own an old ass mini-gun despite restrictions on auto weapons.
Doesn’t make any damn sense…
Posted 2 months ago Report
Link Quote Reply

I AM AN ADULT!!
@Kiryu-Chan
Short version please? I don’t feel like going to Twitter.
Posted 2 months ago Report
Link Quote Reply
Background Pony #1F81
The top safety official has said that the Uvalde polices response to the shooter was “wrong” in hindsight
Reports are also coming in that the shooter had se t a text to one if his friends saying that he shot and killed his grandma and that he was going to shoot up a school. Said message was apparently reported to the police, no response.
The shooter also fired at 2 other people before he made his way to the school, that too was also apparently reported to the police and no response.
Abd then it turns out that he spent a good 12 minutes outside the school firing bullets everywhere before he got inside. That was reported to the police and STILL, no response until he actually got inside and the children had to phone the police.
Posted 2 months ago Report
Link Quote Reply

U mad?
@CaptainXtra
I don’t think so. Pull the trigger and BRRRRRRT.
You don’t have to worry about a loonie getting one though. The BG check for them is far more intensive and can take up to a year to process (same for all full auto weapons), and if you can find one for sale it’ll set you back at least a hundred grand (not counting a few thousand for ammo, if you can find that much).
Now old time hand crank Gatling guns are easier because guns made before 1900 aren’t as restricted, and it’s not considered a machine gun by the ATF because you have to manually turn a crank to fire it (no different than a repeater/lever action rifle). And yeah pulling one of those down a street or sidewalk will be noticeable. 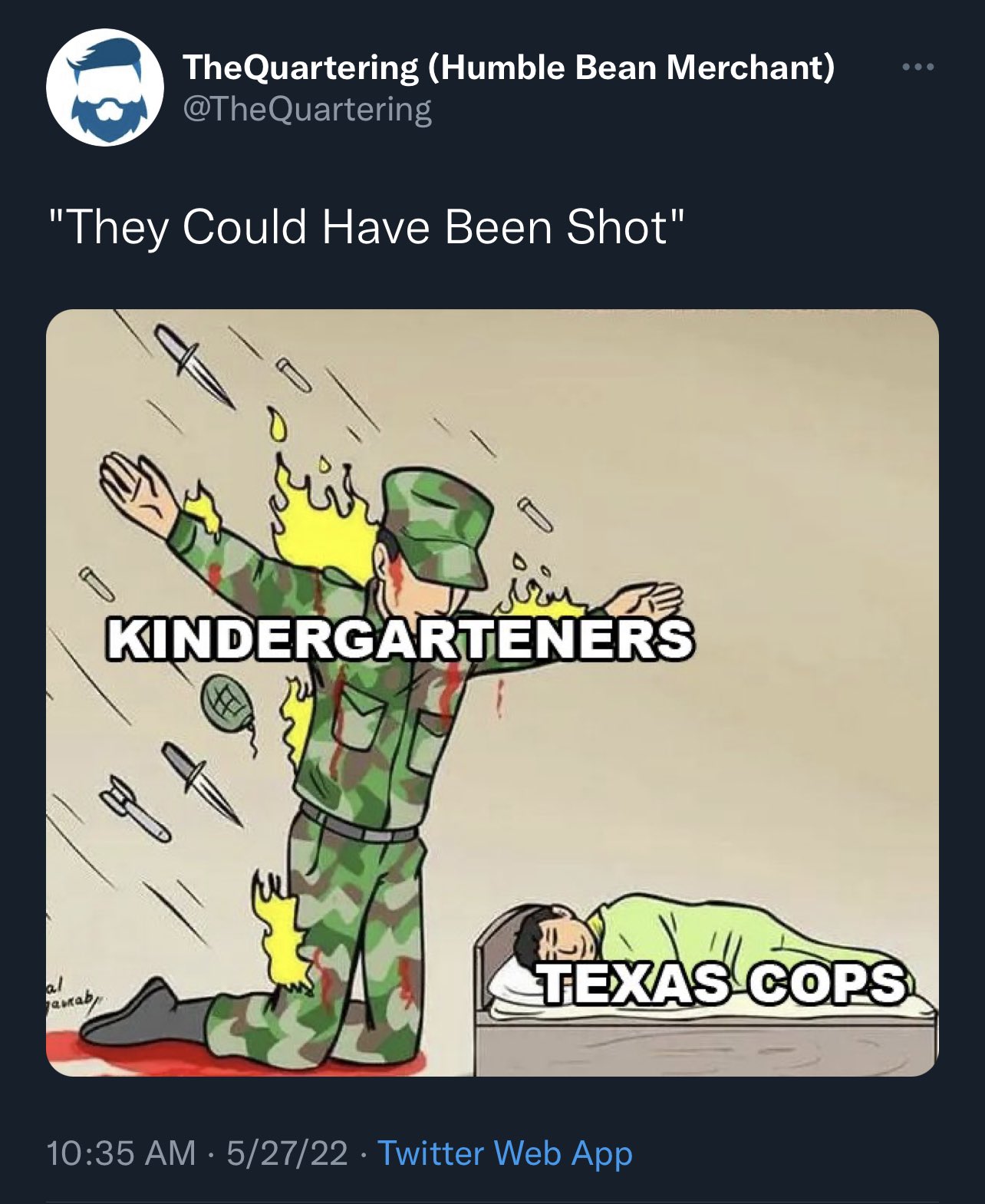 As I previously said:

Part-time Pizza Cat
I’m curious to see if there will be any measurable loss of approval toward police in polling over the next few days. And whether such polling would be indicative of an actual decline or the normal dip before a rebound that dominates US opinion polling.
Posted 2 months ago Report
Link Quote Reply

Dogs
Holy shit it just keeps getting worse.
Not only were those cowards of the Uvalde police department restraining and tackling parents, they were preventing early responder border patrol agents from entering the building for 40+ minutes.
These cowards are straight up complicit at this point.
Posted 2 months ago Report
Link Quote Reply

“ShimSham my GlimGlams”
@Dustcan
ACAB look’n pretty “I told you so.”
Posted 2 months ago Report
Link Quote Reply
Background Pony #1F81
@Dustcan
Is it safe to say that this has been the worst response the US has had to a mass shooting?
Or has there been worse cases of police messing up attempts to stop an active shooters?
Posted 2 months ago Report
Link Quote Reply

IWTCIEM
From @ChrChristensen on twitter:
“Sweden is in the Top 10 countries in the world in terms of firearms per capita, but you are 14 times less likely to be killed in Sweden with a gun than you are in the US. Sweden has gun control.
Getting gun in Sweden: apply w/police after 6 months active membership in registered gun club. May not be carried in public. Gun safe required. Hunting in Sweden: written theory test (70 questions, min. 60 correct); 3 different practical tests (security, accuracy); license.
Don’t let gun nuts bullshit you about Europeans “having their guns taken away.” Germany, Sweden, Finland, Norway all have many legal weapons. Gun control is about testing, training, licenses and restricting access to high-powered weapons no civilian should have.
Swedes treat guns like any other dangerous instruments that require knowledge, training & responsibility. Like cars. Swedish driving test is very difficult. Result? Sweden one of lowest road fatalities per capita in world despite harsh winter climate. 4x lower than US.
Here’s my favorite argument against gun control: “Gun control laws don’t work because criminals don’t follow the law.” Shit, well, in that case, let’s get rid of Stop signs, traffic lights and drunk-driving laws. Because, you know, criminals will always break the law. Idiotic.
Traffic laws exist to regulate behavior of people who are perfectly law-abiding. Not just nut-cases who want to drive drunk. Speed limits, traffic lanes, Stop signs, driving tests are set to reduce deaths among usually good, honest citizens. Same principle with gun control.
The Big Lie of gun lobbyists is about self-protection & they point at Europe. Here’s a secret: US w/the most guns in the world and the UK w/very few guns have the same per capita homicide rate using knives. Now, how is that the case if guns protect you? Because it’s bullshit.
In all of 2021, 46 people killed in Sweden (pop. 10.3 million) with a firearm: one of worst years on record. That’s 0.44 per 100,000 people. In 2020, the rate in the US was 6.1 per 100,000. So, one of Sweden’s worst ever gun homicide rates was still 14x lower than the US rate.
And, as I am writing this thread…news of yet another mass shooting in the US. In 2022 (135 days so far) there have been 199 mass shootings in the US. On average, that’s a mass shooting every 17 hours.”
Posted 2 months ago Report
Edited 2 months ago
Link Quote Reply

Dogs
Not so coincidentally, the NRA has been nothing but running defense trying to explain away all these mass shootings with every excuse in the book. Shoot, in the case of Ted Cruz they’ve been inventing new ones by blaming, and I kid you not, “doors”, “prescription drugs” and “declining church attendance”.
Posted 2 months ago Report
Link Quote Reply
Background Pony #E0BC
@Zincy
I mean. They’ve been caught on camera just gunning unarmed people down multiple times. There’s mountains of data out there suggesting the police aren’t the pillars of society they’re presented as; domestic abuse, propensity to kill their own and other people’s dogs, civil forfeiture taking more than burglars, questionable veracity of lowering crime claims.
Presenting it to people usually gets you called a conspiracy theorist or a libtard.
So I’m gonna say not at all.
Posted 2 months ago Report
Link Quote Reply

Offline
Personally I think assault rifles are a dumb idea to start with.
Posted 2 months ago Report
Link Quote Reply

high altitude cloud pone
@IWTCIEM
Oh god theres so much misinformation in that ughhhh…. dare i go through and debunk it all?
Posted 2 months ago Report
Link Quote Reply

Offline
What is the purpose of a 5.56x45 rifle?
Or a 7.62x39 execution round?
Posted 2 months ago Report
Link Quote Reply

(Foil Hat)
@Badheart
Or a 3.14x69? Does such a thing even exist? I don’t even understand the terminology…
@Dustcan
So they actually prevented people from stopping the shooting? Yeah, they deserve prison.
Posted 2 months ago Report
Edited 2 months ago
Link Quote Reply

Ironically this isn’t true on both accounts for the roads shared spaces are more efficient and are safer and the banning outright historically doesn’t work. look at prohibition, the war on drug, and abortion. If there was an outright ban on guns people like myself will still keep them as is our right.

The Big Lie of gun lobbyists is about self-protection & they point at Europe. Here’s a secret: US w/the most guns in the world and the UK w/very few guns have the same per capita homicide rate using knives. Now, how is that the case if guns protect you? Because it’s bullshit.

Actually its not bullshit. After the UK banned guns there was a spike in violent crimes. Northern London got so bad the London Mayor Sadiq Khan wanted to implement knife control laws. Now to the US. According to the CDC guns are used defensively up to 3,000,000 times a year.

I don’t know what source is using specifically but when I look up the mass shooting deaths per capita the US falls in 11th. this is behind Norway, Serbia, France, Macedonia, Albania, Slovakia, Switzerland, Finland, Belgium, and the Czech Republic. That said I think the US has a duty to reduce these numbers further with the policies I mentioned in previous posts.
Posted 2 months ago Report
Edited 2 months ago
Link Quote Reply
Interested in advertising on Derpibooru? Click here for information!