Generals » Don't blame me, I voted for the other guy. (Politics General) Search Posts
Started by Archonix
Posted 4 years ago
133209 replies
Subscribe

high altitude cloud pone
@IWTCIEM
also if we ban guns wholesale like you advocate what should I do if I am violently attacked? call the racist incompetent 1312 police? especially because I am a target for said attacks.
Posted 27 days ago Report
Edited 27 days ago
Link Quote Reply

U mad?
@YourPalContrail
Sit and take it. It’d be like the UK where you can’t defend yourself or your property much.
Libs just can’t get it through their heads criminals will always have guns. I’m sure the major street gangs have stashes well hidden away for just that.

IWTCIEM
@YourPalContrail
I’m not one to give advice, and I’m not entirely aware of the specifics of your living situation, but since you asked, here are some suggestions I could offer. If there were stricter gun laws in place your attacker would be far less likely to be carrying a gun. And if he has a knife, my advice would be for you to learn basic (non-firearm) self-defense skills. After all there are a number of stories showcasing people tackling active shooters with their bare hands, while getting themselves injured in the process of protecting others. If you’re worried about others attacking you, you need to evaluate situations where you could put yourself in harm’s way and try to physically avoid them as much as possible. As for protecting your property, perhaps you should look into some of these steps.
https://www.adt.com/resources/help-prevent-home-invasion

Latecomer
@Background Pony #E0BC
Do they actually do much good against those people as it is?
@YourPalContrail
Honestly? They don’t actually exist. The relevant question is “what does this country think should be a right?”, and America’s list is revealing. (Mainly revealing that it was a prototype.)
Posted 27 days ago Report
Link Quote Reply

Latecomer
@YourPalContrail
Defend yourself unarmed, flee, surrender, or count on a reformed and competent police force.
@lonewolf
But very few criminals in the UK do have guns, or dare to use them. And many gun deaths in America are not caused by “criminals”, anyway.
Posted 27 days ago Report
Link Quote Reply

(Foil Hat)
@lonewolf
I’ve heard that if you attack someone robbing your house, you get prison and they don’t.
Posted 27 days ago Report
Link Quote Reply

IWTCIEM
@lonewolf
Libs (despite them being too right-leaning by my standards) aren’t guided by wishful thinking. Rather they’re simply going off evidence and studies which prove that enacting stricter gun control laws is highly effective at preventing criminals from obtaining guns. Canada, for example, is 7th in civilian gun ownership, however because the process of buying and possessing guns, along with restrictions on semi-automatic rifles and magazines, is lengthy, requires training and frequent inspection, gun violence and mass shootings are almost unheard of there, in contrast to the US, where it has in fact gotten worse over the past two decades. Even countries like the Czech Republic and Switzerland have gun laws in place which would be considered “tyrannical” by 2A sycophants; in fact most Czech and Swiss citizens view current gun culture in the US as being far too extreme by their standards, and it’s true.
https://www.businessinsider.com/switzerland-gun-laws-rates-of-gun-deaths-2018-2
Posted 27 days ago Report
Link Quote Reply

Latecomer
@Wiimeiser
I think that may have happened once or twice, but it’s certainly not a rule.
Posted 27 days ago Report
Link Quote Reply
Background Pony #EC7E
@YourPalContrail

It has nothing to do with whether I like it or not. The number you’re citing is, as has been detailed in multiple other studies, fairly vulnerable to overestimation. And the CDC itself never publicized the data for the same reason Gary Kleck, one of the authors of the original study, would later revise his conclusions. The number was based on responses to an optional question that was only asked in specific states (meaning it was not nationally representative). The limited sampling size, the fact that the question was optional and not every respondent chose to answer, the fact that the survey excluded non-gun owners, and (again) the vulnerability to overestimation, all combine to make it actually impossible to extrapolate any sort of meaningful, national level conclusions from this study.

how about The 2013 study by the Institute of Medicine and National Research Council which found “Defensive uses of guns by crime victims is a common occurrence, although the exact number remains disputed” and “ Almost all national survey estimates indicate that defensive gun uses by victims are at least as common as offensive uses by criminals, with estimates of annual uses ranging from about 500,000 to more than 3 million per year, in the context of about 300,000 violent crimes involving firearms in 2008 “

Except it didn’t “find” that. The report you’ve mentioned here, which was produced by an IoM and NRC committee of healthcare specialists with no specific interest, background, or expertise in gun violence, had no original research. Those numbers you mention came from prior reporting on the subject, many of which also had issues and disagreements in regards to the results, which is why the report specifically mentions “the exact number remains disputed”. So again, this is not in any way a useful metric to measure or extrapolate defensive gun use by.
Posted 27 days ago Report
Link Quote Reply
Background Pony #0E9C
@Meanlucario
So let me get this straight: you claim to be a “conservative”, yet you repeatedly demonstrate post after post on the issue of guns and gun violence to such a degree that some of these posts (like this one) showcase how borderline anti-Second Amendment your positions are.
This makes absolutely zero sense.
Posted 27 days ago Report
Link Quote Reply

Manually Breathing
@Background Pony #0E9C
It would be absolutely awful if The Left and The Right weren’t completely monolithic and everyone on one side or the other didn’t agree on all issues!
Posted 27 days ago Report
Link Quote Reply

U mad?
@Wiimeiser
Yep. I also know there was a case of a guy who saw someone breaking into his shed, so he flashed a knife at the burglar through the window, and he got arrested for brandishing it. I wouldn’t live there for anything.
Posted 27 days ago Report
Link Quote Reply

@Background Pony #0E9C
Kinda a strict litmus if being a conservative means “Guns all day erry day.”
Would make political alignment tests a lot easier than the 100+ Strongly Agree to Strongly Disagree questions standard though.
Posted 27 days ago Report
Link Quote Reply
Background Pony #0E9C
@The Smiling Pony
In all actuality, yes, I agree with you on that, yet I have never seen ANY American conservative who anti-gun or anti-2A in any respect, in my entire life, until I learned of Former Justice Burger’s position.
They’re about as rare as a young black person alive today with an overwhelmingly negative view on Martin Luther King Jr. and his legacy.
@Dustcan
…Then you’ve conveniently ignored your entire past post history about what you’ve always viewed as the inherent aspects of being a ‘conservative’ in the U.S. if this what you actually believe, unironically.
Posted 27 days ago Report
Link Quote Reply

IWTCIEM
@Dustcan
I mean we all know Republicans and Libertarians are complete sycophants when it comes to gun ownership, but the vast majority of mainstream white Democrats aren’t much help though. They think repealing the Second Amendment, making healthcare universal and a right, is “radical for their tastes.” At least that’s what plenty of them have told me for thinking otherwise. They were also ablest and accused me of faking my autism. This is why I have no respect for the Democrats. Even if they’re nowhere near as bad as the Republicans they still can’t convince me that they have my interests at heart.
Posted 27 days ago Report
Link Quote Reply

Latecomer
@IWTCIEM
And we’re not even nearly best in Europe in many ways.
Posted 27 days ago Report
Link Quote Reply
Background Pony #E0BC
@Background Pony #0E9C
Now in fairness to them. That moderately popular youtuber is currently king shit of Asshole Nerd(TM) Mountain and his opinions have sway. Unfortunately. Usually he’s just cruel for the fuck of it and his followers monkey see monkey do, so yeah. It’s surprising to see him…not do that.
Posted 27 days ago Report
Link Quote Reply

Manually Breathing
@Background Pony #0E9C
Yes, political positions used to be pretty different pre-Clinton, a lot of positions “switched sides” and both parties became much more uniform and monolithic.
I’d blame FOX NEWS and Facebook and all that, but the change to the current shitmire we’re in now precedes them.
Posted 27 days ago Report
Link Quote Reply

IWTCIEM
@The Smiling Pony
Fox News is definitely to blame, and while Facebook is definitely shady I’m more inclined to blame InfoWars, Twitter and 4chan for the spread of dangerous misinformation on the internet.
Posted 27 days ago Report
Link Quote Reply 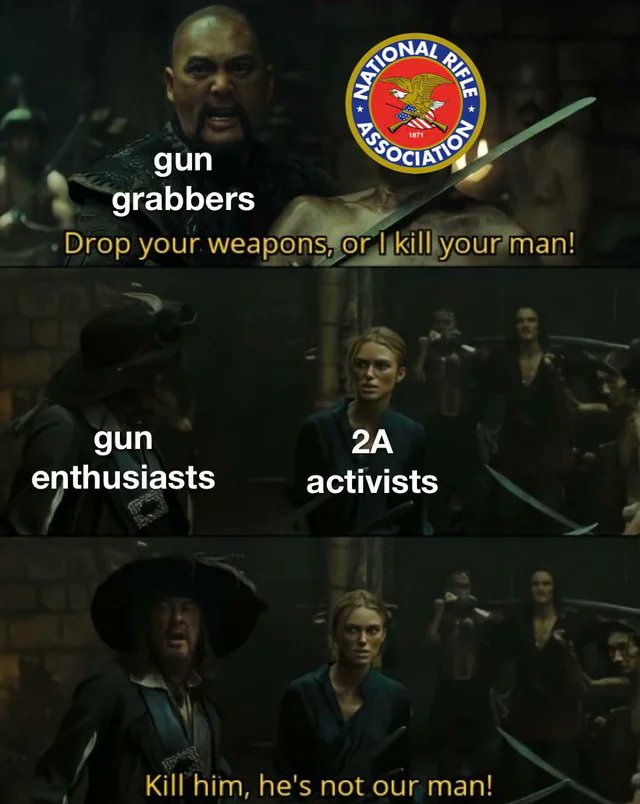 Ironically getting rid of the NRA is something both pro-gun and anti-gun people are in favour of.
@The Smiling Pony
Wasn’t there like a Fairness Doctrine and a more diverse media landscape before the Clintons. I wonder who changed that…
Also, and this is for IWTCIEM too: Why no mention of Sinclair, which is even more right-wing than Fox. Is local media being owned by an ultra-conservative conglomerate not worth discussing? You’d think that local media that’s only 3-4 steps removed from Alex Jones would be more of a concern than the goings on at Fox News or 4chan.
Was reminded of that fact when relistening to the Chapo Trap House episode ripping Pod Save America a new one recently.
Posted 27 days ago Report
Link Quote Reply

Manually Breathing
@Ebalosus
Was Sinclair always as bad as it became during Obama? I never really watched local networks while I was in the US, so only became aware of their shenanigans when clips of those started going around the interwebs.
Posted 27 days ago Report
Link Quote Reply
Background Pony #EC7E
@Ebalosus

Wasn’t there like a Fairness Doctrine and a more diverse media landscape before the Clintons. I wonder who changed that…

Well if you’re talking about the Fairness Doctrine, the person you’re looking for is Ronald Reagan. Although if you want to be technical it was the FCC under Reagan who ended the Fairness Doctrine in August 1987 with a unanimous vote.
Posted 27 days ago Report
Link Quote Reply
Interested in advertising on Derpibooru? Click here for information!