Generals » Don't blame me, I voted for the other guy. (Politics General) Search Posts
Started by Archonix
Posted 5 years ago
138242 replies
Subscribe

@kleptomage
That’s because their idea of “Law and Order” comes with a tiny asterisk linked to an almost invisible text: “Only applied to a group that’s been cast as being undesirable by my party”, may it be minorities, political opponents or even political allies that haven’t fully drank the Kool-Aid to the same degree.
Posted 1 months ago Report
Link Quote Reply

Kazapsky
Five scoops of ice cream
@YourPalContrail
This argument fails at the most basic level. Humans are by definition social creatures - a single man on his own in the wild is a species of one waiting to go extinct, nothing more. Nothing he does will have any meaning. A thought experiment that discards the society that man is part of is completely without merit.
And for a society to function at all, certain things MUST be suppressed - chief among them man’s tendencies to take all for himself and to inflict violence on things he does not like. No society can function without rules and limits being imposed.
Posted 1 months ago Report
Link Quote Reply

@YourPalContrail
This argument fails at the most basic level. Humans are by definition social creatures - a single man on his own in the wild is a species of one waiting to go extinct, nothing more. Nothing he does will have any meaning. A thought experiment that discards the society that man is part of is completely without merit.

It’s not an advocacy for man to stay “in nature” It’s just to understand on a fundamental level what man is able to do without societal intervention. This is purely to understand the individual. without these foundations society today wouldn’t be able to function. and purely on a utilitarian level societies that recognize the rights of the individual are the better societies to live in. It’s not a coincidence, the idea that individual man has rights is inherently pro-social.

And for a society to function at all, certain things MUST be suppressed - chief among them man’s tendencies to take all for himself and to inflict violence on things he does not like. No society can function without rules and limits being imposed.

Part-time Pizza Cat
@YourPalContrail
I wouldn’t use bees, or ants, as an example as by and large single entities in those hives are utterly expendable to the greater whole and have almost 0 autonomy.
Other social mammals are better comparisons.
Posted 1 months ago Report
Link Quote Reply

#WaifuLivesMatter
Just so you know, and I don’tcare if I get muted for this, Biden’s a colossal failure, and it’s high time he realizes it before he continues to fuck up the economy with his horseshit administration. Biden sucks. Deal with it. mic drop
picks up mic Also, the statement stand for his loser son, Hunter. Human trash.
Posted 1 months ago Report
Edited 1 months ago
Link Quote Reply

“ShimSham my GlimGlams”
@Flutter_Lover
If you want an “I did that” sticker to put up at gas stations so they’re pointing and falling prices, just say so. But it’ll cost you money you could be putting toward fueling your car.
There, you got the attention you wanted?
Posted 1 months ago Report
Edited 1 months ago
Link Quote Reply

#WaifuLivesMatter
@Vivace
I’m not doing this for attention. I’m doing this because this country is suffering from sheer incompetence….
Thus trying to find a good paying job with so much applications that NONE of them have replied back from my email, and it is MIND NUMBINGLY FRUSTRATING it’s been 2 months. And it doesn’t do much justice with the economy in the shitter.

Part-time Pizza Cat
@Flutter_Lover
The government is required to sell excesses from the strategic reserve to international markets, it’s by law. Bush did it, Obama did it, Trump did it. We get a pretty substantial kickback for doing it.
As for the economy, it’s actually doing pretty good. July had the strongest job report since before the pandemic, we are at record low unemployment, if it wasn’t for inflation we’d have the highest wage growth in 60 years, stock market has been pretty bullish the last few months, inflation is starting to cool and its growth is platueing.
All in all, the economy is not in peril. We might hit a recession, but those are normal. We only see recessions as super bad because of the Great Recession, which was a huge anomaly caused by the housing crash.
Posted 1 months ago Report
Link Quote Reply

World's Okayest User
What is it about Hunter Biden that makes him live rent free in people’s heads? Guy has absolutely no role in the government, he doesn’t hold office. Why should I care that he snorts coke and blows hookers?
Posted 1 months ago Report
Edited 1 months ago
Link Quote Reply

CHS, Class of 20XX
@Kiryu-Chan
Petty revenge. People talked shit about the Trumplings, so now they want to talk shit about Biden’s kid. Never mind that Ivanka and Jared had actual government jobs in the White House Office, while Junior and I’M ERIC! managed the business empire that TFG totes divested from you guys, pinky swear, no conflict of interest here, look at all these manila folders. Meanwhile, Hunter is a private-ass citizen, unconnected to his dad’s affairs, doing… fuck, I don’t know, Billy Beer but for cocaine? Is that a thing?
Posted 1 months ago Report
Link Quote Reply

Dogs
@Vivace
Flutter isn’t wrong though. Brandon is kinda a failed president. Thanks Manchinema!
He really needs to just have a Joker Moment and become Dark Brandon for realzies, because otherwise there’s still a non-zero chance that he’s going to become a lame duck president for the next two years of f Republicans make any headway on the midterms.
@Kiryu-Chan
Hunter is having all the sex and snorting all the coke. MAGAts are jelly AF.
Posted 1 months ago Report
Link Quote Reply

CaptainXtra
PUNCH A FASCIST!
The Far Right calling for Civil War is kinda funny when you consider that a fair amount of them are elderly geezers, pansy well-off/rich brats that have never worked hard a single day in their life, or are in this kind of shape: 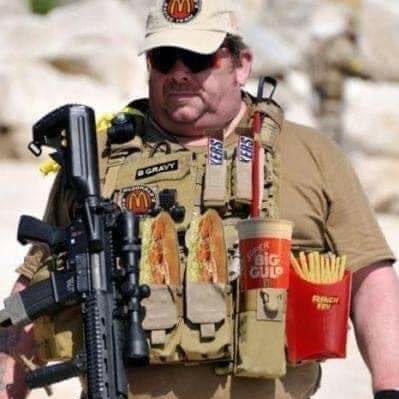 Believing in a world without capitalism or guns is magical thinking.

Capitalist realism: When it’s easier for someone to imagine the end of the world compared to the end of Capitalism.

Believing you can fix a proven system with no experience is called the Dunning Kruger Effect.

That isn’t even what the Dunning Kruger Effect is, Jesus wept.
Posted 1 months ago Report
Link Quote Reply

@CaptainXtra
Their entire rhetoric is based off them being the aggressors, if you listen to the bullshit being spewed, there’s absolutely no talk about the reality of a civil war (loss of life, propriety, essential services due to broken supply lines, scorched earth tactics and ruthless kill or be killed 24/7 mentality), only the call to mindless action and “shooting the libs”. They’re LARPing as macho soldiers that don’t fear anything, but as the capitol riots have shown, once that delusion of a one-sided slaughter is broken, so are they. It’s really telling that Pence’s FBI escort lost their shit during his extraction, if an actual shootout had occurred, the aftermath would’ve been traumatizing to both parties.
There’s a reason so much effort is put into IFF technology and basic decency to designate DMZs, avoid friendly fire and allow for medical help during conflicts. Civil war is unspeakably atrocious on a whole different level, without any of those being accounted for and an abundance of horrifically powerful weaponry in the hands of people that haven’t thought about consequences beyond the first 24 hours. Spoiler alert: “We’ll just do like in ‘The Purge’” ain’t gonna work. You don’t get to slaughter whoever you want then go home and act like nothing happened.
Civil war is not an option. Period. Enough with the machismo fantasy of “might makes right”, those shitstains weren’t even able to wear a gawddamn mask to protect their loved ones, they don’t get to act like they’re ready to see those with their brains blown all over the ground because someone thought they were ANTIFA from a distance and they only “trained” to shoot, not to have fuckin’ trigger discipline or standards of engagement.
Posted 1 months ago Report
Link Quote Reply

Nightmare E-Soldier
You don’t have to like guns or capitalism to know which way the world is going. Also I’m a liberal, with no gun or intent to fight anyone, I just have a dark imagination, it is easier to see the end of the world before the end of capitalism, just stay alive 30 more years. Making me out to be violent just because I’m telling people I see a violent world isn’t fair.
I wasn’t born in any great war, nor am I even mentally fit to. Yes it’s easier to talk than to be in an armed conflict, I guess because when I talk there isn’t a whole lot of good argument coming back.
Dunning Krueger effect means overestimating ones abilities, because lack of insight on their limitations. Nice gaslight attempt.
Posted 1 months ago Report
Link Quote Reply

(Foil Hat)
@Beth
How exactly do you see the world going, then?
Posted 1 months ago Report
Link Quote Reply

Nightmare E-Soldier
@Wiimeiser
World burning down. 30$ for an ounce of chicken, 50$ for a gallon of gas, and 7.25$ for an armalite sports rifle. Scorched and burned by capitalism and violence.
I doubt the ability to just completely unheave or infrastructure. I don’t like capitalism, I only give it points because it behaves like any other animal dose. I do make the mistake of dismissing alternatives too quickly, I often try to bait the other side of the argument, and screw it up by not addressing everything properly.
Also I don’t believe in one sided slaughter. Having a gun is one thing, but if you walk around intimidating people with it you should get your arm shot off. I’m not an esoldier, i’m just a black pilled coward, I doubt my ability to do the right thing in any dangerous situation, so i’m not being macho or talking down to people.
Posted 1 months ago Report
Link Quote Reply

Nightmare E-Soldier
@The Smiling Pony
Bite me. You don’t impress me.
EDIT: There is no room for personal attacks here, it’s just a forfeit of argument.
By dismissing my argument, you’re saying you can surmount capitalism and gun violence? I didn’t recall saying these things are great, i said they’re powerful.
I’m not talking about ideals, I’m talking about reality
Posted 1 months ago Report
Edited 1 months ago
Link Quote Reply
Interested in advertising on Derpibooru? Click here for information!