Why are you texting me anonymously? let’s not hide and show your profile.

Why? You’re asking me why I’m being anonymous?
In a contry full of snitches always eager to backstab someone for their own benefit? Seriously?
You’re that stupid? Wow.
And I’m not socializing with terrorrists and usurpers, who think that current actions are “okay” somehow. To just barge in into other country and enforce your own vision of “peace”. You’re delusional. Get lost.
Posted 4 months ago Report
Link Quote Reply
SleepySteve

Dogs
In the latest “You dun goofed” news, UK intelligence is now reporting that the number of Russians fleeing the country to avoid conscription is larger than the initial invasion force of Ukraine.
Posted 3 months ago Report
Link Quote Reply
Background Pony #D7D1
@Dustcan
No shit, Sherlock. More men than “initial invasion force” left during the first 6 months before mobilization was announced. Now it’s even worse.
Posted 3 months ago Report
Link Quote Reply

Dogs
@Background Pony #D7D1
I mean, the initial invasion was estimated to be around 190,000. Foreign estimates indicate between 194,000 to 200,000 Russians are trying to flee.
Posted 3 months ago Report
Link Quote Reply
SleepySteve

Applears
Biden Thinks Non-Nuclear Threats Will Stop Putin. His Military Doesn’t
I dunno, I think Biden is right on this one. Especially when the military says one “non-nuclear option” he should consider is a “decapitation strike to kill Putin in the heart of the Kremlin”. Pro tip: if any of your military officers make that suggestion you should relieve them of duty immediately.
Posted 3 months ago Report
Edited 3 months ago
Link Quote Reply

Latecomer
@SleepySteve
This does seem notably heavy-handed, since it looks like they weren’t even going to qualify anyway.
Posted 3 months ago Report
Link Quote Reply

Constant Lurker
@igotnopicks
At some event, Biden asked where a congresswoman was. She had died weeks or months ago, and a statement under his name was released mourning her death. No idea whether he forgot or if he didn’t even see the statement.
Posted 3 months ago Report
Link Quote Reply

Dogs
Some More News, the youtube channel who’s name I vaguely base my running joke of announcing the latest in news updates, did a vid summarizing all we know about DeSantis’ human trafficking of migrants.
He gives a rundown on what happened while pointing out some lesser reported factoids. Things like how Trump Jr.‘s (no, not the one that’s one half of Dumb and Dumber, the one that’s the governor of Florida seems to really hate being the governor of Florida what with his obsession on becoming president). ill-conceived idea was doomed to backfire from the beginning by picking a state that’s famous for its warm reception of immigration as well as being the cornerstone of the Underground Railroad movement back during the time of slavery. He also points out that, legally speaking, it probably wasn’t a good idea to pick the one island filled with very rich and very bored lawyers to pull a very likely illegal PR stunt.
In Some More Related NewsTM, the migrants themselves are still over at Cape Cod as the authorities are still trying to navigate the legal quagmire DeSantis forced upon the local government, all at taxpayer expense. Some are hoping to be settled back in Martha’s Vineyard due to the warm reception they received. While that would be a bad idea due to Martha’s Vineyard being in the off season, as it’s primarily a summer vacation resort after all and jobs are slim pickings this time of year, the migrants are likely entitled to a special visa reserved for immigrants who’s been a victim of a crime.
Neat! DeSantis’ stunt backfired so hard that his spending of the $12 million earmarked specifically for deporting immigrants actually ensured these ones get to stay in the country.
Posted 3 months ago Report
Edited 3 months ago
Link Quote Reply
Background Pony #1D40
@SleepySteve
Fascism absolutely can coexist with high social spending. It would be a grave mistake to allow fascism to grow because “they help the poor, so they cannot possibly be fascist”. Remember, fascism is not dogmatic. It’s adaptable and populist.
Same applies to proto-fascism/quasi-fascism.
You yourself have described Poland’s ruling party as fascist but the main reason they won multiple elections is that they have considerably expanded social spending.
Posted 3 months ago Report
Link Quote Reply
Background Pony #F897
Deletion reason: poster request
Posted 3 months ago Report
Link Quote Reply

Moderator
友情は魔法だ
@Dustcan
That they are not, legally speaking, “immigrants”, nor were they “deported”, the spending of money reserved for deporting immigrants is also, legally speaking, incredibly fucking stupid.
It’s shocking that someone can rise to the level of governance that Ron Desantis has with such a very minimal and in some cases incredibly backward understanding of even the most simple of laws, but … here we are.
We have a governor who can’t figure out that money reserved for a specific purpose for people within his state boarders can’t be used for a political stunt in an entirely different state, involving the interstate trafficking of refugees participating in what is ostensibly a Federal resettlement program.
If this was 3D chess I’d say that Desantis was trying to set up a perfect case specifically designed to challenge the ability of States to ignore Federal laws and dictates … something carefully crafted to go straight to the Supreme Court.
But, this is not 3D chess. It’s not even checkers. It’s flipping the fucking table and hoping you get a bright moment in front of a camera.
But Desantis didn’t even get that. He just managed to make ‘the other side’ look good by comparison.
This is just incredibly fucking stupid.
I remember when the US had governors and politicians at other levels who did fascinating things to challenge precedence. Really deeply intriguing cases that opened up the ‘living tissue’ of the law of the land and either made things that had never been done possible, or … sometimes very regrettably … “fixed” little holes in the tax laws that were how companies were able to accomplish shit and compete on the global stage so well. Like the old ‘product swaps’ that we used to be able to do. Getting something for nothing was a big part of why the 90’s were the halcyon golden era of technology that they were.
Now we’re just getting kids flipping the checkerboard right off the table and stomping around in front of the camera waving their arms like they were clever.
And of course people will vote for them. Because “spending millions of dollars on a pointless prank” somehow equals “own the libs”. It’s time to get someone in charge of Florida who will either break the shit to the point where it can be rebuilt, or has at least a highschool understanding of Civics and the Law.
2LDR: Nathan Explosion For Governor Of Florida! 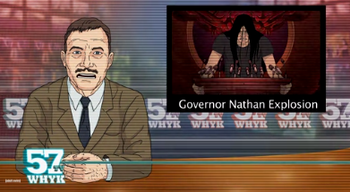 Dogs
Ginni Thomas, traitorous wife of Supreme Justice Clarence Thomas, traitor, met with the Jan 6 committee and held to the Big Lie that the 2020 election was stolen.
According to her testimony she was responsible for pushing many lawmakers to overturn the election but played no part beyond that.
Posted 3 months ago Report
Link Quote Reply

Applears
@Background Pony #F897
Half.
To me anyone who believes in a “natural” social hierarchy = fascist. You can argue with me about that all you like, but I stand by it.
Posted 3 months ago Report
Edited 3 months ago
Link Quote Reply

CHS, Class of 20XX
@SleepySteve
Seems a bit overbroad, but I won’t argue with the notion that a “natural social hierachy” is inherently suspect.
Posted 3 months ago Report
Link Quote Reply
SleepySteve

@Background Pony #F897
Half.
To me anyone who believes in a “natural” social hierarchy = fascist. You can argue with me about that all you like, but I stand by it.

(I wrote the comment, accidentally was logged out)
I can think of no other way of interpreting “exterminating fascism and its adherents once and for all” then murder. Murder you wish would happen given how you frame “modern liberalism” not being “up to the task” as a bad thing. So you want nearly 4 billion people killed. just wtf bro, even I’m shocked
Posted 3 months ago Report
Edited 3 months ago
Link Quote Reply

Dogs
@Meanlucario
Texting correspondence with lawmakers, one of which alludes to backing with the army, surely rises to the level of conspiracy.
“Conspiracy to” what is the bugbear. The main issue shown with many of trials over the Redneck Rebellion was exactly which law violation to slap them with as in the early days pretty much all of them got off easy with just “trespassing”.
Nowadays judges don’t have a problem calling a fish a fish, but the judiciary is still squeamish about leveling damaging claims against people of importance.
@SleepySteve
That’s a bit broad.
Posted 3 months ago Report
Edited 3 months ago
Link Quote Reply

Cool Spook
@Dustcan
Fame being used as a shield is a cancer.
Posted 3 months ago Report
Link Quote Reply
Interested in advertising on Derpibooru? Click here for information!