Generals » Don't blame me, I voted for the other guy. (Politics General) Search Posts
Started by Archonix
Posted 5 years ago
142779 replies
Subscribe

Gallusposting since 2019
China is currently facing a population issue.

Due to the one-child policy and the rising cost of living, less people in China are interesting in starting their own families. The government stated that if they do not resolve this, eventually younger people in China will be strained to support more elderly people due to the falling birth rates.

This, along with the US, are examples of countries with a falling birth rate. Although it could be good for the environment and resources, having a declining population could eventually make a country weaker.

I would like to know from both conservatives and leftists: “What policies would they suggest to prevent a country from dying out?”

From what I have seen online, leftists would advocate for government support and more immigrants from everywhere (what about the culture, though? *). Conservatives would call for more heterosexual families, though gov support for said families would be discouraged as “socialism” and “Big Government”.

Monde de merde
@HorsesandMuchMOAR
Didn’t they do away with that policy about five years ago for this very reason?
Posted 1 years ago Report
Link Quote Reply

Since no one addressed my previous Russian question I’ll make a new one:
What systems do Russia and Germany have in place to prevent another Stalin and Hitler type individual respectively from ever taking power again?
Putin and Merkel are both shit leaders but they aren’t quite on the same level of horrible from those previously mentioned two asshats.
At least not yet…

All it takes is the same as anywhere, at least for a Hitler: a worker’s uprising to occur, be immediately suppressed, and who ever takes over the state there after to continue on the suppression to reaffirm Bourgeoisie power and to carry out a revolution of its own to reaffirm its own power.

CaptainXtra
PUNCH A FASCIST!
@tehwatever
So Israel is the villain here?

Monde de merde
@CaptainXtra
The Israeli right is the villain. They’re the one who’re at fault for sabotaging the peace process because they wanted their stupid Jewish ethnostate at all cost and bullied the Palestinian population so mercilessly they turned to the radicals of the Hamas to initiate retaliation, thus triggering an endless escalation of violence and radicalization until the current situation became what it is, with even formerly peacefully coexisting neighbors lynching each other in the streets.
Posted 1 years ago Report
Link Quote Reply

Which still means it’s currently more profitable to not work than it is to work.

@CaptainXtra
The Israeli right is the villain.

Yes it it. Like, this isn’t just a bash against right wing-ism, but how Israeli right wing-ism is so far gone that Yair Netanyahu, the Prime Minister’s son, posts anti-semitic memes and says Antifa and BLM are worse than neo-nazis.

Just, imagine being not only a Jew but also have a direct connection to the leader of the Jewish nation but you are so far down the Pewdiepipeline that literal nazis look at you and say “My Man!”

In other news, the GOP is now following in Dear Leader’s footsteps and wanting to whitewash the Jan 6 insurrection.

The same people who were hiding for their lives while Ragnar the Shirtless and his buddies were tracking shit across Capitol halls nobody said Trump supporters were housebroken after all while calling for their heads are now treating the attempt on their lives like it’s climate change.

What, you thought I’m kidding when I call MAGA a Death Cult?

And just some random 2 images I came across. 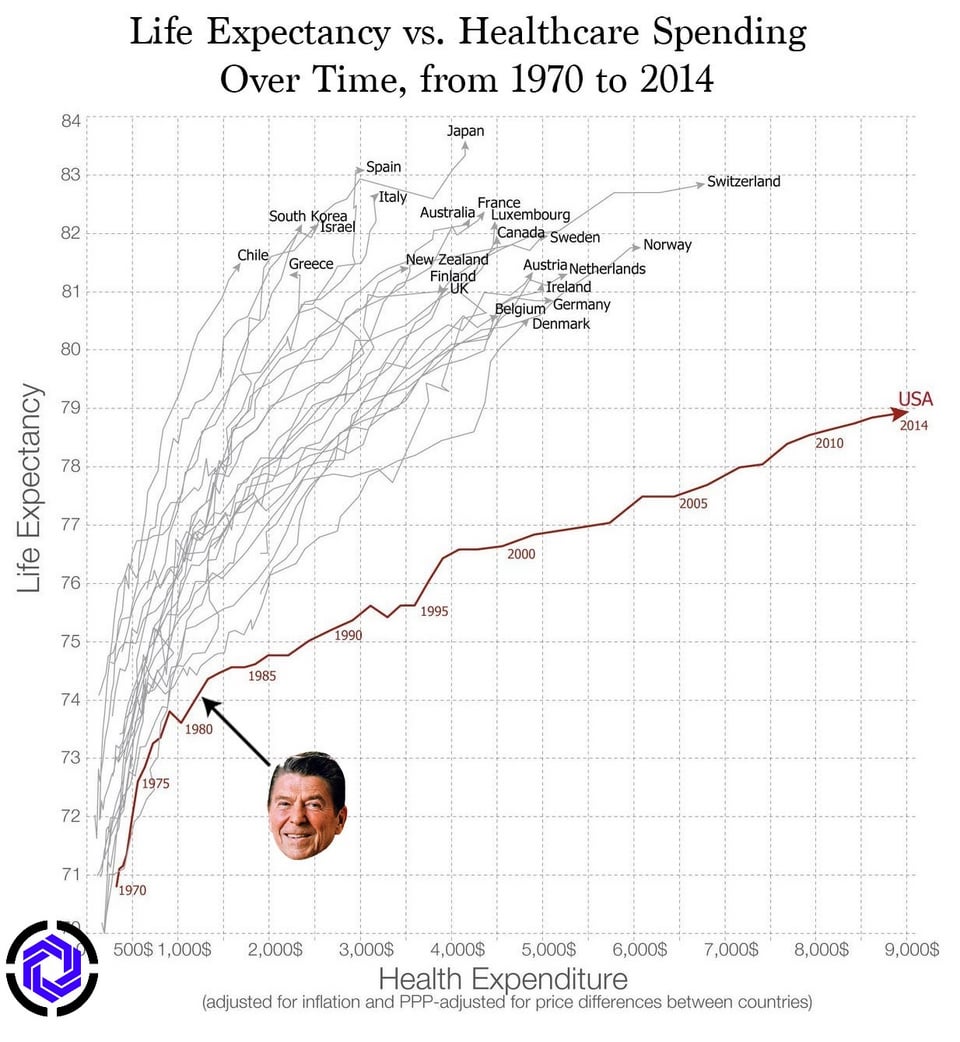 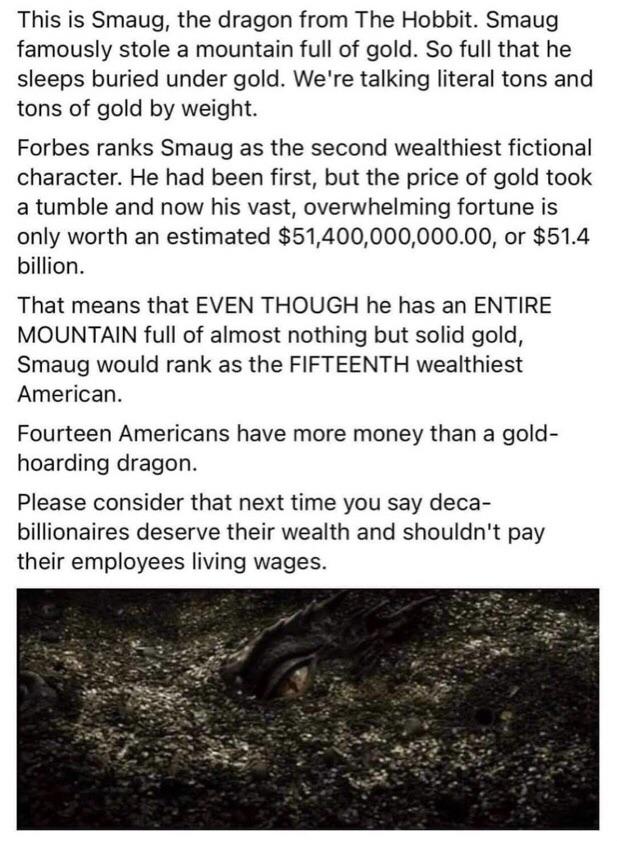 Imagine the fantasy metaphor for greed being less greedy than real life people. That a literal mountain of gold is but a fraction of your wealth.

But that doesn’t mean we should tax the rich amirite?
Posted 1 years ago Report
Link Quote Reply

@CaptainXtra
More or less. Israel fits the Heel role more than they do the Face role.

The moment you say bs like “is complicated” or “is a conflict, both sides are doing damage” then you’re probably are on Israel’s side.

Imagine a light heavyweight (Israel) vs a bantamweight (Palestine) and they’ve been fighting for ten rounds, and all ten rounds the three judges give 10-7 rounds to Israel.

Is a clear mauling, is a clear bullying, but the commentator goes: oh look it’s competitive, Israel can’t let up or it’ll get knocked out, Israel is defending itself from Palestine’s fierce attacks.

But I’m here like “the fuck are you talking about? Palestine’s getting MAULED. He’s getting ragdolled! Is the commentator drunk or something?”
Posted 1 years ago Report
Link Quote Reply

@tehwatever
I agree. But, Hamas is kinda bonkers. Firing rockets at the Israelis now just kills Palestinians. Surefire way to provoke another ground invasion that costs even more lives.

The bigger nations, America especially, needs to force Israel to accept a Palestinian state. An international force should be posted in the region, Bosnia style. Letting Israel continue to choke Palestine and Gaza is unacceptable. Israel cant ride the sympathy wave from WW2 forever. Now they are the oppressors and need to be held to account for that.
Posted 1 years ago Report
Link Quote Reply

Dogs
I mean, Israel and Palestine’s…“conflict” is a complicated issue that goes back several millennia. As is most of the middle east’s geopolitics, but that’s a discussion for another day.

But at this point, Israel has won. Palestine is not the “good guys” or necessarily the victims here, but at this point the power difference between the 2 is so great that it’s not being facetious to say Israel is the aggressors nowadays.
Posted 1 years ago Report
Link Quote Reply

@Dustcan
Palestinians are in large part the victims here. The way they are now isolated and walled in. And not to speak of the way they were treated when Israel was founded. Many were displaced by force and since those days have had so much bad happen to them at the hands of Israel. Sure, they have fought back but when they are practically thrown out of their homelands for Israeli settlers who would not fight? I have seen many stories of all kinds of shit from there on the news up throughout the years. Shame the world has not intervened here.
Posted 1 years ago Report
Link Quote Reply

Latecomer
@tehwatever
Most Israelis would say it’s different, either because they have no intent to exterminate them (in which case, they should listen more to what some of the far-right are going on about) or because Palestinians have been sworn enemies of the state for decades while Jews in Germany were just citizens getting along with their lives.
Posted 1 years ago Report
Link Quote Reply

Latecomer
@HorsesandMuchMOAR
If Jordan wanted them, they would have done that decades ago.


@tehwatever
And yet Israel is also a flourishing first-world state, while the likely result of a Palestinean victory would be on about the level of freedom, democracy and tolerance as most of the Middle East.

“It’s complicated” is truth, not bullshit.


@Dustcan
And yet the Palestinans would never agree that Israel has won. Nor will they cease agressing.
Posted 1 years ago Report
Link Quote Reply

Monde de merde
@Latecomer
Conveniently forgetting that Palestinians were also just citizens getting along with their lives until the Jewish immigrants came in en masse to recolonize the land and it only got worse for them henceforth.
Posted 1 years ago Report
Link Quote Reply

Latecomer
@Ereiam
Yes, that’s part of what makes it a problem. And indeed, there are many other ways in which the two situaions are not very comparable at all.
Posted 1 years ago Report
Link Quote Reply

@Latecomer
Where are you getting that idea from? that palestinian victory would be on the level of Middle East? Palestine never won ONCE, and for 70 years they’ve been practically animals in a cage.

Imagine an American backed Palestine. An educated Palestine, independent from the Middle East. A democratic palestine similar to what Israel is.

What you’re implying, Latecomer, is something racist. You’re implying, that native Palestinians and by extension its muslim population, can’t be like Israel, when given the same opportunities and backing by global powers. If that’s not jewish favoritism you were just saying, then what was it?

Imagine you saying this about black people of America: that the result of black people getting power would be on the level of South Africa post Apartheid.
Posted 1 years ago Report
Link Quote Reply

@Dustcan
May not be the good guy but are the victim of entirely disproportionate aggression on a daily basis–to the point that their entire existence is defined by it.
To think: ALL Palestinian zoomers and millennials have existed under some FIRST WORLD police state, while being told by the world that they’re “cockroach” or “pests” for being very stubborn in their fight for some semblance of dignity and respect.
If they were ever given the chance to be a fighter, with proper gyms, proper equipment, proper trainers…Oof, they’ll be one fierce motherf–. Ain’t nothin’ happening in the ring be enough to mentally break a Palestinian who deals with twitchy armed guards on a daily.
Posted 1 years ago Report
Edited 1 years ago
Link Quote Reply

Latecomer
@tehwatever
I suppose since it’s a total hypothetical, one could imagine a lot of things - but any future proceeding from now, or even the last few decades, is very far from any such thing.

I do think the Palestinians could have a prosperous, free state in time. But right now, their culture has been extremely warped by their situation and leadership - much like many other nations in the Middle East and elsewhere. (You could even say the same about Israel, given how they keep re-electing Bibi and his ilk.) And Western-backed nation-building has not generally been a resounding success in the region.


@tehwatever
This is exactly the mindset that will take generations to repair. One could argue that Israel’s behaviour is related to having too much of this mindset itself.
Posted 1 years ago Report
Edited 1 years ago
Link Quote Reply

That’s kinda what I mean.

There’s way too much history between the 2 to just brush one or the other off as “Good guy” or “Bad guy”. Indeed, ignoring thousands of years of history between middle east factions is why America keeps making things worse every time they go and “Spread Freedom” over there. No joke, both Bush Sr. and Jr. administrations had advisors that knew of the geopolitics and had plans to navigate it to an optimal solutions. Both Bush’s instead went the “Imma kill brown people!” route, which got us Al Qaeda and ISIS.

But Israel is clearly the oppressor at this point. If Palestine was the superior power they would totally be the oppressors, but in this timeline Israel is currently the stronger and is doing the oppressing.

Latecomer
@Dustcan
So the trick is rebalancing the power without just flipping the oppression - and without falling into the same pitfalls as other interventions.
Posted 1 years ago Report
Edited 1 years ago
Link Quote Reply

@CaptainXtra
Only the Lost Cause revisionists and the Southern “patriots” ignorant of their own history.

Would it be a stretch to suggest that the Confederacy would’ve sided with Hitler in WW2 if the Civil War never broke out?
Posted 1 years ago Report
Link Quote Reply