Generals » Don't blame me, I voted for the other guy. (Politics General) Search Posts
Started by Archonix
Posted 4 years ago
119272 replies
Subscribe

A lot of nothing and a bunch of apologizing for their behalf.
Posted 4 months ago Report
Link Quote Reply

@Dustcan
Is this before or after the CNN one? Because CNN would have to have been tone deaf to be asking for a balanced "both sides" narrative to a guy who just got yanked outta his house by the police.

On related news, apparently a call for ceasefire was vetoed by yours truly.

If USA was reffing the fight.
Posted 4 months ago Report
Link Quote Reply

After. I'm sure it's a coincidence that Israel, after having been spending their entire aggression suppressing information by bombing media buildings, just happens to decide it was that man's turn for eviction less than 24 hours after he sticks his head up long enough to spotlight Palestinian suffering.

And considering American media's complicity in Israel's oppression of Palestine, I'm sure CNN is just feeling awful about it after he punked one of their news hosts. 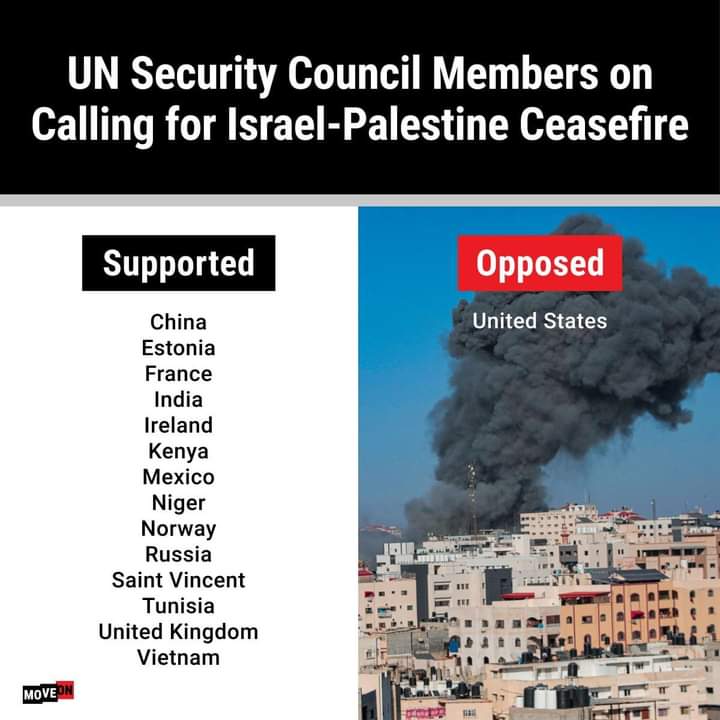 Latecomer
@Dustcan
Does US foreign policy ever change much between presidents?
Posted 4 months ago Report
Link Quote Reply

Peace to all
@Latecomer
Some parts yes and some parts almost never would be the quick answer. Foreign Policy establishment in both parties protects parts of it more vigorously then others.
Posted 4 months ago Report
Link Quote Reply

She Totally Pegs You
@Dustcan
Ha ha ha, oh why does it hurt to be optimistic?
Posted 4 months ago Report
Link Quote Reply

So apparently all during Ramadan 2021, Israel's been trying to evict people out of a neighborhood near Al-Aqsa mosque, which culminated in the tail end of Ramadan where armed police force in full gear raided the mosque as people were praying.

Tzipi Hotolevy on BBC: "let's check the facts! The fact is that there were 80k muslims praying and worshipping, while their leadership, both the palestinian leadership and hamas, called for violent act! So we had to send soldier—not soldiers, POLICE to protect law and order."

Me: …by teargassing and bum rushing barefooted worshippers 80k who, btw, were still in Ramadan so they were FASTING.

Also it's hella cute how she tries so hard to earn sympathy by describing Palestinian kids and teenagers throwing rocks at jews praying at the wall.
…
Even with the acknowledgement that teens hurling stones at ppl praying is annoying as fuck (teenagers can be retarded) if you're comparing THAT SHIT, to fully armed police throwing GAS CANISTERS? Or how about palestinians not having rights? how about them evictions?

Some pranksters chucking stones are trivial in comparison to what the Israeli side been doing. Tzipi is some next level Karen I swear. So next level.
Posted 4 months ago Report
Link Quote Reply

After. I'm sure it's a coincidence that Israel, after having been spending their entire aggression suppressing information by bombing media buildings, just happens to decide it was that man's turn for eviction less than 24 hours after he sticks his head up long enough to spotlight Palestinian suffering.

And considering American media's complicity in Israel's oppression of Palestine, I'm sure CNN is just feeling awful about it after he punked one of their news hosts.

Man. Nothing like the US backing an oppressive Middle Eastern regime — again — while China of all nations showing more humanity to remind one's self that America is the leading sponsor of terrorism.

You know you're morally fucked when China, an authoritarian country, supports a ceasefire.
Posted 4 months ago Report
Link Quote Reply

UN Security Council: Ceasefire?
USA: No. Israel has the right to defend itself.

UN Security Council: CEASEFIRE?!
USA: NO! As long as Palestine is resisting, I'm not stopping it!

She Totally Pegs You
@NitroFury
Can't believe I'm saying this, but I wish the U.S. would just take a page from China this one time.

@Penguin Dragneel
It's sad really, cause the United States' morality is in the toilet.

@ᏰᎯᎠᎻᎬᎯᏒᎿ
"I remember being in Gaza after a bombing strike, and picking up bomb fragments, a piece of it was made in Dayton, Ohio" —an american journalist

This is some Stark Industries stuff. I'm surprised we haven't had a supervillain from Palestine yet.
Posted 4 months ago Report
Link Quote Reply


Thanks for nothing Biden.

MAGA and Pro-Trump Republicans, this is the kind of shit you should use against Biden’s Administration instead of bullying Liz.
Posted 4 months ago Report
Link Quote Reply

Latecomer
@CaptainXtra
Problem is, I think most of them are even more pro-Israel.
Posted 4 months ago Report
Link Quote Reply

Monde de merde
@Latecomer
Yeah, them attacking Biden on that would be kind of shooting themselves in the foot (don't forget that Trump's decision to move the US embassy to Jerusalem contributed to exacerbate the climate of hostility over there).
Posted 4 months ago Report
Link Quote Reply

We kinda already do. But they aren't supervillains, they aren't from Palestine, and they call themselves "Al Qaeda" or "ISIS" et al.

"Mexican Joker" is a funny gag in the cartoon with swearing children until you realize the US really is making a bunch of Mexican Jokers in nations all over the world.

In more "MAGA Death Cult" news, the same Congressperson who said the Jan 6 insurrectionists were just 'tourists' was also seen photographed barricading the doors to Congress from those same 'tourists'.

I mean I'm all for believing this prissy 1%er really does believe they were just "tourists" and was barricading the doors because he really didn't want to mingle with the unwashed masses, but no. It really is what it looks like.

@Ereiam
60 palestinians dead from the protest over that, so yeah…criticizing Biden's same ol' same ol' stance on Israel would make them a major hypocrite.

@NitroFury
more like they hate what they see in the Arab people; namely backward civilization, theocracy, oppression against women and at the heart of it all; islam—which in 2021 still seems to be the one thing that is constantly fighting against their western-country projects, be it progressive projects like same sex marriage, human rights, etc. or national-identity projects like zionism.

Which means their dislike towards "Arabs" extend to Iran and Turkey, despite them NOT being Arabs. To be fair, Israeli and USA's dislike aren't totally unjustified.

USA: China is openly racist and is trying to wipe out a portion of its population! We have to call them out on this bullshit!

USA: Israel has the right to exist. Anybody who calls Israel racist is an anti-semite.