Generals » Don't blame me, I voted for the other guy. (Politics General) Search Posts
Started by Archonix
Posted 5 years ago
138175 replies
Subscribe

@Mikey
One of the big reasons why the US is the punching bag of the world is that they are so openly and public about it. Aswell as their constant interference in other countries. Like for example everyone knows that North Korea is a vortex of human misery, but how often are we reminded of that vs the US? Or other countries that have major issues.
Also that majority of people understand the main language of the US probably contributes to that as well. There is certainly a barrier many people aren’t ready to make when it comes to other countries with different languages and even if its just a google auto translate.
Posted 4 months ago Report
Link Quote Reply

IWTCIEM
@The Smiling Pony
Therein lies the problem. The political spectrum in the US is skewed so far towards the right that most Americans are either full-on fascists or “moderate conservatives.” Wanting basic protections for immigrants/LGBT/POC, as well as common-sense restrictions on semi-automatic handguns and rifles is considered “far-left” by US standards.
Posted 4 months ago Report
Link Quote Reply

Somehow Omnipresent?
@IWTCIEM
Wholly unrelated to what you’re replying to, but sure, go on.
Posted 4 months ago Report
Link Quote Reply

World's Okayest User
@Mikey
It’s not just that they’ve had tons of problems, I said tons of problems it refuses to address. It refuses to improve. Things that it’s decades behind the rest of the world on(healthcare, labor reform, housing) or things it’s outright going backwards on(abortion, LGBT rights), but thank god we’re giving more money and weapons to the police and military
Posted 4 months ago Report
Link Quote Reply

IWTCIEM
@Seiken
A large part of that also has to do with the amount of pro-US propaganda which is instilled into US citizens from an early age. As a result large swaths of the US population, INCLUDING many Democrats, obsessively talk about being “proud to be an American” or that they’re the “greatest country in the world,” which the rest of the world knows is complete bullshit. And what about the immigrants from poorer countries who got suckered into immigrating to the US? They’ve been manipulated in the same way a child predator lures gullible kids with free candy, and once they become citizens they’re stuck with all kinds of awful experiences. In the case of the US, though, it’s even worse because their foreign interventions are what caused the collapse of those lesser nations in the first place.
That isn’t to shame immigrants for making the choices they made, but at the same time, if they truly wanted to escape oppression they should’ve looked towards Canada and New Zealand instead; places which would ACTUALLY treat them like fellow human beings and not expendable assets. Those are real “nations of immigrants.” The US on the other hand is a “nation of idiots.”
Posted 4 months ago Report
Link Quote Reply

Moderator
Spooky Book Pone
I just think it’s another first world country, I’m not proud to be American, I was just happened to be born here. I don’t really get pride for any country.
Posted 4 months ago Report
Link Quote Reply

Dogs
The NRA has banned guns from their convention this weekend. Again.
It must be hard to be the Onion nowadays when reality is taking your gimmick.
Posted 4 months ago Report
Link Quote Reply

Moderator
Spooky Book Pone
@Kiryu-Chan
I’m not sure I agree with that. Far from good, but the worst developed country? I dunno.
Posted 4 months ago Report
Link Quote Reply

IWTCIEM
@Mikey
Well here’s the difference: pride in being an American is rooted in blind consumption of false propaganda and/or hatred towards other nations. Pride in being an Australian, Brit, Canadian, etc. is rooted in not being a hateful dumpster fire like the US.
Posted 4 months ago Report
Link Quote Reply

Somehow Omnipresent?
@Dustcan
https://www.npr.org/2022/05/25/1101181842/nra-trump-speech-guns-banned-houston?t=1653517322812
So much for their “good guy with a gun” defence, or the whole whining about how “gun free zones” just make for easy targets. It’s almost like they don’t believe their own moronic propaganda…
Posted 4 months ago Report
Link Quote Reply

IWTCIEM
@Mikey
Definitely the absolute worst in the Western world though. (the ones in darker blue) 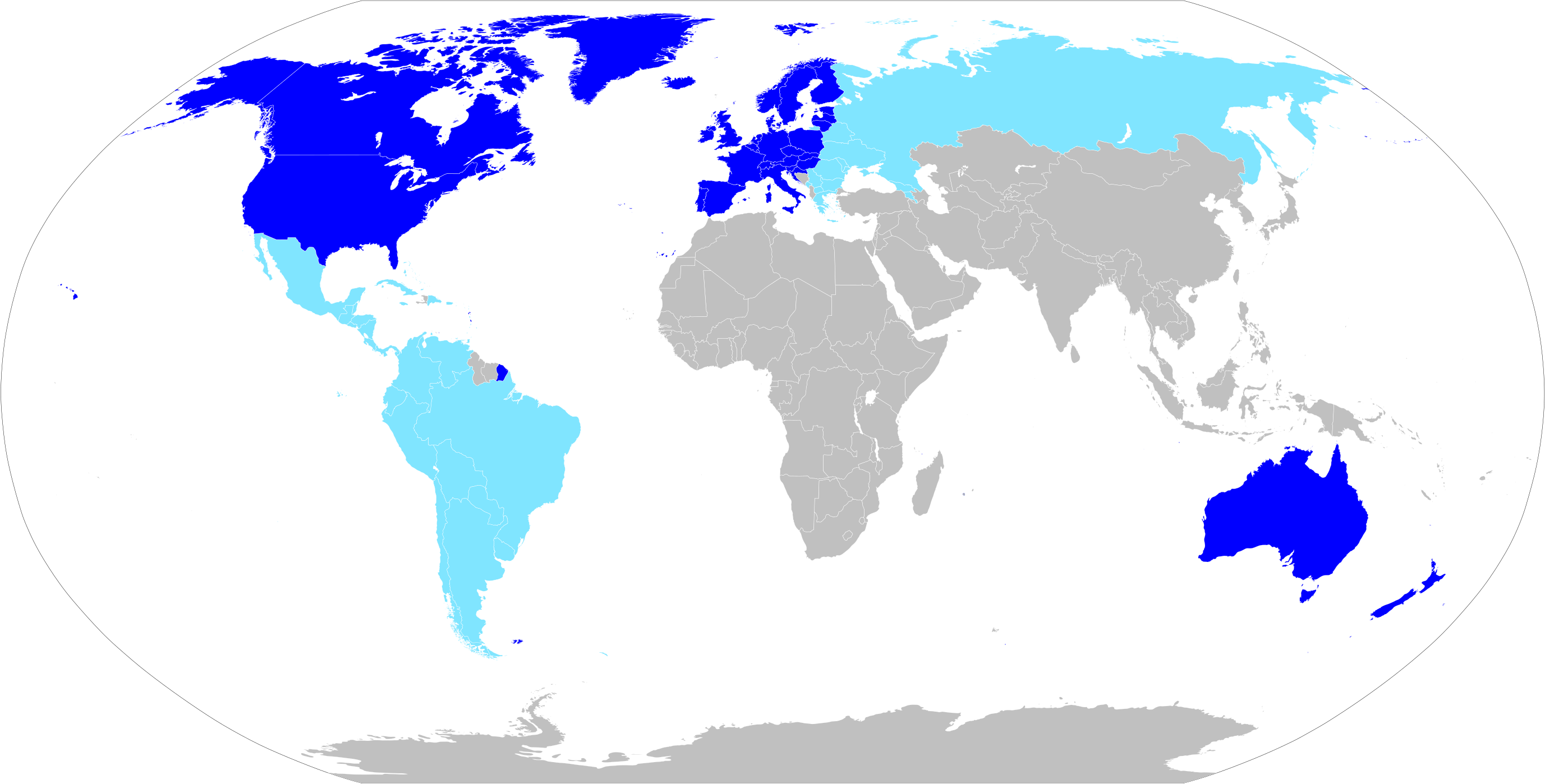 Latecomer
@IWTCIEM
And yet many of those immigrants still go to considerable effort not only to come to the USA, but to remain there. That would seem to suggest that despite all it’s issues, it has better prospects than their home countries, no?
@IWTCIEM
If one is to take pride in one’s nation’s accomplishments at all, then the US has quite a few. If you take more pride in how well it supports it’s citizens, though, then yeah, it’s a dumpster fire… but not always as bad a one as now. And in any case, Nazi Germany wouldn’t make it anywhere near the competition.
Posted 4 months ago Report
Link Quote Reply

“proud to be an American”

Thats generally a weird mindset, many people proclaim proud to be X when X is something they most of the time had no part in, most of the time things that are born into or are a result of their environment: citizenship, race, sexuality are among the most common things that i don’t get how someone can take pride into? Being an unapologetic gay, sure. Being a proud gay? Why?
I only take pride in things i worked towards to, that are a result of my efforts. And paying my taxes doesn’t make me proud of my country.
Posted 4 months ago Report
Edited 4 months ago
Link Quote Reply

Spook Fest 2022
It’s sad, that basic regulations is there to prevent all this, but it will never happen because Republicans won’t do anything cause too busying counting the money from NRA.
Posted 4 months ago Report
Link Quote Reply

Latecomer
@Seiken
It confuses me a bit too, but I still feel it… it might be something like the emotional equivalent of an insurance policy or trust fund, or even a “commons of pride”. You might never achieve something great, but if one of your “kin” does, then surely you must have some similar potential, right?
Posted 4 months ago Report
Link Quote Reply
Background Pony #6B50
People’s opinion on countries can’t be boiled down to specific metrics. I think America is the best country… for me. I have traveled to a few countries in Europe and they were nice, but I wouldn’t want to live there. Those countries have their own culture and ways of doing things and I can respect that, but they have their own problems as well.
Canada is nice, but I don’t want to deal with the weird french canadian quirks and the underlying inadequacy problem they seem to have being next to the US. France was a ton of fun and the people were relatively friendly, but they also have some crazy laws of their own I wouldn’t feel comfortable with, same as Germany.
Assuming that American pride is rooted in hate is a bit ignorant really. Their are plenty of reasons for people to be proud of their country.
Posted 4 months ago Report
Link Quote Reply

Latecomer
@Background Pony #6B50
Could you perhaps list some? And/or tell us how, if at all, you reconcile that pride with the US’s blatant issues?
Posted 4 months ago Report
Link Quote Reply
Background Pony #6B50
@Latecomer
Some reasons why?
History is one, which you have mentioned.
Culture is another.
The political institutions of your country is sneakily a big one, it applies to the country and states.
The laws of the country, which really circles back to culture in a way.

Culture I feel is the biggest one, because so much falls into it. For instance the US is one of the most charitable nations in the world, that’s something to be proud of.
How do I reconcile it? It’s not hard, every country has its problems, and you shouldn’t simply judge a nation based solely on those problems. I can both acknowledge the things I don’t like while being happy with the country as a whole.
Posted 4 months ago Report
Link Quote Reply

@The Smiling Pony
Therein lies the problem. The political spectrum in the US is skewed so far towards the right that most Americans are either full-on fascists or “moderate conservatives.” Wanting basic protections for immigrants/LGBT/POC, as well as common-sense restrictions on semi-automatic handguns and rifles is considered “far-left” by US standards.

The political spectrum in the US is skewed so far towards the right that most Americans are either full-on fascists or “moderate conservatives.”

L O L.
–
You REALLY do not appear to have virtually any clue about what the word fascist actually means, at all, here—nor that the overwhelming 80-90% majority of the American population, nation-wide, are not fascists.
–
–
When looking at the actual, full-on reality of the situation, the only people who sincerely believe in such demonstrably false, fanatical demagoguery are people who are either hardcore, rhetoric-vomiting old-school boomer liberals/progressives and radicals (along with gen xers and older millennials of the sort whose ideological view line up with that of Rage Against the Machine), anarchists, tankies, other communists, Marxists, and far-left libertarian and authoritarian radicals. I strongly suspect that one of these political positions represents yours, though if not, feel free to inform me.
That aside, I must say that I’m somewhat sorry if this seems like a dramatic shift in tone on my end, yet hearing you proclaim such absurd and blatantly false talking points is beyond anything that shouldn’t be first met with anything other than outwardly indifferent dismissal.
Posted 4 months ago Report
Link Quote Reply

Spook Fest 2022
And also, the shooter deserves every form of mockery; cause pure evil shooters, dead or alive, deserve to be laughed at.
Posted 4 months ago Report
Link Quote Reply
Interested in advertising on Derpibooru? Click here for information!