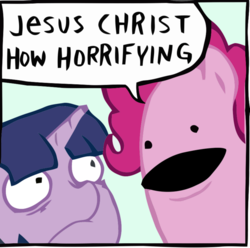 The Frowning Pony
13 blinks per minute
Anyone posting a suggestion already covered in this first post gets a free 12h ban.


As the other thread’s gotten quite long and a bit messy, I’m starting this new one and a separate bug reporting thread. Post here to suggest new features, improvements on existing stuff, etc.

Please explain things as clearly as possible; state what the suggestion is, why we need, how it would be used, etc.

Wherein I list the things that we already have a plan to do, and those things that have been suggested but are very much likely not going to happen. Discussing new things we should want to do is done over here.


See below for general list of things we already have had a think about:

-> Private faves - THAT IS THE WHOLE POINT OF FAVES
-> Account deletion / wiping - not great on the database, and pretty abusable
-> Greentext / colors in posts and comments - Because no
-> Public ban history - I'd be on that list...
-> Pinned task bar that follows you as you scroll down - not really our style, and they suck on mobile devices
-> Image deletion by uploader - because that'll never be abused...
-> Spice up Background Pony IDs with randomized “pony-like” names (see this thread)

Done (because sometimes, things actually get done! also this list is probably incomplete):

Ok, here is one suggestion from the old thread, which seemed to got sunken in somehow. So i think it’s ok to repost it here.

How about an list where you can see all the artist tags?
Maybe with some statistics with how many pictures it has, tags mostly associated with, or percents which systems tags apply the most, and a short timeline like the one by the users?

The statistics are only an optional suggestion. Nice to have, but not a must.

The Fluffiest
I trust the “notification system updates (more events)” part means that there’ll be a way to boost them to more than just 51 max? ‘cuz I keep loosing a bunch of them whenever I don’t check them for more than a couple hours like, say, sleeping, or going to work. :I
Posted 8 years ago Report
Link Quote Reply

I trust the “notification system updates (more events)” part means that there’ll be a way to boost them to more than just 51 max? ‘cuz I keep loosing a bunch of them whenever I don’t check them for more than a couple hours like, say, sleeping, or going to work. :I

There’s no limit to the number that are stored on your account, though notifications older than 3 days are removed globally, but there is a display limit - as you read things, new notifications will come into view. I’ve upped this to 100 going forward, since 51 was somewhat arbitrary.
Posted 8 years ago Report
Link Quote Reply

The Frowning Pony
13 blinks per minute
@trashboat
If a notification was triggered 3 days ago (and not updated by another event) it’s a goner.
Posted 8 years ago Report
Link Quote Reply

trashboat
Professionally Depressed
@The Frowning Pony
Is this because of Limitations? If not, Then that makes no sense
Posted 8 years ago Report
Link Quote Reply

on the Forum search
will it be posible to use the tag system on forum posts? to keep concistency and shit.
Posted 8 years ago Report
Link Quote Reply

paluzna
@The Smiling Pony
shit, must had confused it whit the other version of this post, the one you closed.
Posted 8 years ago Report
Link Quote Reply

Parzival
Fancy tags style searching
Add visible tags to filters (as in tags that make an image not be filtered)
Edit: digged up that line of code i worked on for visible tags: next if image.tags.­any? { |i| account.v­isibletags­.include?(­i) }
Watched list searching
Fix fancy tags
Posted 8 years ago Report
Link Quote Reply

Well…It’s no biggie but I wonder if it’s going to be possible to “thank” for comments.
I don’t really want a comment upvote/downvote function, but sometimes you just want to send a message to someone who made an excellent/hilarious comment, just something like “yes I’ve seen this and I loved it”. On some forums I’ve seen a function where you are able to press a “Thank” button, and a small “XY thanked the user for this post” message would appear under the comment (this is effectively “faving” comments, but maybe more primitive).
Posted 8 years ago Report
Link Quote Reply

onepinksheep
Any plans on having some sort of image upload preview? By that, I mean provide a preview of the image before finalizing the uploads. It may be a little paranoia talking, but I keep getting worried about whether I might be uploading the wrong image by mistake. :/
Posted 8 years ago Report
Link Quote Reply

onepinksheep
@dt
Exactly like a thumbnail. Perhaps something like a “Get Preview” button beside the upload field. It’s a simple thing, but it improves the usability and site experience a lot.
Posted 8 years ago Report
Link Quote Reply

Ocellus is best buggo
@onepinksheep
That’s why I always double check the filename of whatever I upload.
Posted 8 years ago Report
Link Quote Reply

onepinksheep
@soundtea
So do I, but my mild case of OCD means that I also triple- or sometimes quadruple-check anything I upload. And even then, I’m not satisfied until I actually see the final uploaded image. A simple image preview improves the user experience significantly.
Posted 8 years ago Report
Link Quote Reply

onepinksheep
Speaking of uploads, can a link to the Do Not Post list be added to the upload page?
Posted 8 years ago Report
Link Quote Reply
Solitude

onepinksheep
@Solitude
Yeah, I just noticed it right after I made that post. I don’t know how I missed it. Derp. Maybe capitalize Do-Not-Post or something, I dunno.


@dt
I could have sworn I had BORED already, but realized that was in another browser so I reinstalled it. Turns out there’s no preview, at least, not when you use the “grab from url” feature.

Another suggestion relating to uploads: How about an “Add comment to upload” box? Unlike the description box, this one will add a comment as you’re uploading.

I miss the show so much
One teeny tiny idea: the image tooltips that shows the tags and size could also tell you the image size in kilobytes or megabytes. Like this (using image >>502749 as an example):

Add an option to the settings page to automatically subscribe to any images which you fave.
Posted 8 years ago Report
Link Quote Reply
Background Pony #1075
Can we please change our screen names? I want to change mine because I’ve learned that it contains the name of a band, which may be trademarked. I may be legally obligated to change it if they take notice and have a problem with it.
Posted 8 years ago Report
Link Quote Reply

Can we please change our screen names? I want to change mine because I’ve learned that it contains the name of a band, which may be trademarked. I may be legally obligated to change it if they take notice and have a problem with it.

They’re welcome to follow our DMCA takedown process which is linked to on the bottom of every page.

But no, you can’t, in general. We make exceptions on occasion for people who’ve never posted or commented, but want to start using their account ‘properly’ without losing faves.