Moderator
Well, as most of all knows, if we search for something with sorting which isn’t default id sorting, we will have a something strange, when trying to navigate previous/next between pictures.

So, I wrote a small userscript which fixes that. Here. You need Greasemonkey or Tampermonkey to use.

It’s STRONGLY recommended to disable Fix buttons on start option if it’s enabled! (because it makes more requests than recommended way. You still may use it, but right now it’s provided “As Is” and may be broken)

Settings may be with YourBooru:Settings (direct link). Since 0.3.13 YDB:Settings is included, so you don’t need to install second userscript manualy.

Note, that script sorts images in a little different way than site does, it may lead to differences between site’s search responses and navigation in vague cases (e.g. equal scores).


How scripts interacts with navigation in different sortings:
*. Score-like (score, faves, upvotes, downvotes, wilson) — does almost the same, but in a bit different way (“edge-cases” are different and tries to avoid overlapping by your own real-time voting).
*. Relevance — default derpi navigation (broken, awaiting fix on Philomena).
*. Galleries — a bit slow, but works.
*. Random — can be selected between “true” random (next/prev imitates “random” button) and “keep random seed” (slow, but navigation is more consistent).

There is no screenshots, because because. Look at video.
Posted 4 years ago Report
Edited 2 years ago because: 0.5.0
Link Quote Reply

Moderator
Probably, there is a final version of the script.
*. Fixed random sorting and random button queries;
*. Added blinking when link is generated.

Moderator
I added one small ^ button around top search field. I still didn’t explain, what exactly it does:

First of all, if you hover search bar you will notice that dropdown menus. It’s affects at vanilla search too, you may search by score without opening separate search page.

Before we use that ^ button, there is also one thing at tags. 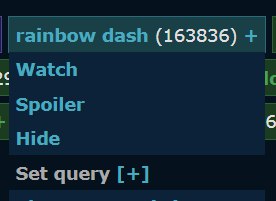 Clicking Set query under Rainbow dash tag and [+] under safe leads to this.

We browsed that image. After we clicked ^, image is still the same, but with different search value, and now we will navigate through different stream of pictures. Or we may try to find a position of image in different case.

Moderator
Since today (probably) Derpibooru shouldn’t lag with navigation anymore. You may turn this part off in userscript settings, since vanilla work faster.
Posted 3 years ago Report
Link Quote Reply

Moderator
Implemented navigation for “first_seen_at” sorting. It should be enabled by default, if not, visit settings.
Posted 3 years ago Report
Link Quote Reply

Moderator
I believed I will disable it with Philomena rolling, but reality is…

0.5.0
— updating to the new API — now requires YDB:Settings 0.9.34 to use API key, since it’s now required;
— added many missing sortings in dropdowns and as find image position options;
— random can be navigated while keeping desired seed (going back and forth will have predictable results);
— outdated and actually working by itself stuff disabled;
— internal refactoring.