Celestia cheats on her taxes.

Or, she would, if Celestia was actually paid anything.

As (one of) the immortal god-empresses of Equestria, her title and status is basically a form of payment in and of itself. After all, wouldn’t YOU want to be the owner of the cafe or the diner or the ice cream shop that could proudly display a “PRINCESS CELESTIA ATE HERE” sign on the front?


That gives me an idea for a fanfic…

twilight sparkle: Princess Celestia! I demand to be paid for my work!

princess celestia: But you are paid! Paid in the love of your friends! Why, you’re practically rich!

twilight sparkle: Save me the greeting card bullcrap, I want money.

princess celestia: (sigh) Twilight, can you keep a secret?

twilight sparkle (thinks back to “Green Isn’t Your Color”) No.

princess celestia: Whatever. The thing is, I haven’t paid you, I can’t pay you, because I don’t get paid myself.

twilight sparkle: But…but how? How do you have this giant fancy castle with the guards, and the gardens, and the treasury? And you raise the sun everyday! How are you, THE most important pony in Equestria, possibly the entire world, not being paid?

princess celestia: My sister and I built this castle ourselves, as was the garden. At first, it was tended to by us, then by volunteers, and when the fledgling Equestria formed its first governing body, they paid gardeners to upkeep it. The guards are paid by them too. Twilight, the truth is haven’t pulled in a paycheck in over 200 years simply because I don’t DO anything but raise and lower the sun.

(Princess Celestia sits down at a low table, gesture for Twilight to do the same)

How do you like your tea? Sugar? Cream? (takes sip of her own tea) Anyway, I’m largely a figurehead these days, most of the actual ruling comes from the council of nobles. Oh sure, I break the occasional tie and do ribbon-cutting ceremonies, but mostly my duties involve raising and lowering the sun, as well as giving advice to those who ask; as rich as the nobles are, the smarter ones know you can’t buy the centuries of knowledge and wisdom I’ve accumulated. Besides that, though, I guess you could say I’m semi-retired?

twilight sparkle: But if you have no money, how do you eat?

princess celestia: The nice thing about immortality is that I don’t need to eat, I just simply enjoy it very much. Oh sure, I get hungry, but I will never starve. Besides, I’m a pony. I eat grass. You can eat grass too. 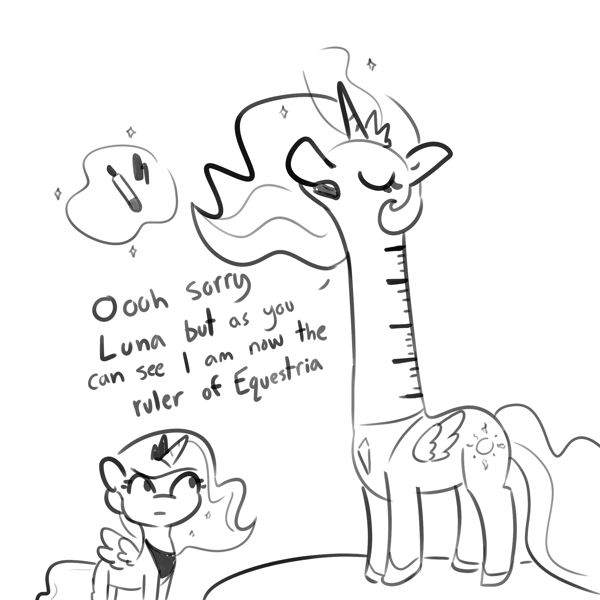 Explorer in Training
Blueblood might be a snob but he is also very protective of his family. He reveres Celestia greatly and even he Luna he shows reverence torwards since she is his aunt. Basically he treats most ponies who isn’t his family like they’re beneath him but for the few ponies who actually are friends with him, he’s a loyal friend who would do anything to help them.

Of course anyone else, he considers to be beneath him, including Rarity, who he treated basically as his servant.

Zipp Dripp!
Because Discord is invincible, he doesn’t have a proper “fight-or-flight” response. So if you can catch him off guard, he becomes paralyzed by the infinite options he has for how to escape the situation.

Explorer in Training
@Glimmer74
She seems like she could make a good attorney herself as in an accusatory one or however it is called. I guess she picked her biting traits from her dad.
Posted 1 years ago Report
Link Quote Reply

Dogs
Twilight’s reign as sole monarch of Equestria ushered in an age of unparalleled prosperity. Her leadership brought about unity and harmony that sagas were crafted in not just her glory and splendor but that of her subjects.

But 200 years after her crowning, an excavation team dug too deep and found a new tribe of miniaturized ponies living underneath Equestria. These “squat ponies” were welcomed into society and found companion and friendship among ponykind. Across the decades they were able to integrate into every facet of pony society as well as branching out into the civilizations of other races. Before long they were as common a sight and mention as any other being.

Until one day without warning they struck out against their neighbors and friends. Nobody knew what triggered them but the squat pony hivemind had declared war on all of Equestria. They wanted to be the dominant species on the planet and would destroy all to make it happen, and so began the 100 Moon War. Overnight ponykind had lost 40% of its population in the rebellion, just barely rallying to prevent total extinction from following. When missives to the squat pony hegemony fell on deaf ears Princess Twilight had no choice but to call upon the many nations that call themselves Equestria’s allies. Together the alliance forced back against the squat pony supremacy.

But success was nonexistent. As if in mockery of her own beliefs, the squat ponies were too organized, too harmonious in their advance. Whatever hard-fought victories were achieved were nigh-instantly undone as the squat ponies rallied to close their ranks. The alliances numbers dropped from the onslaught until changelings and minotaurs were rendered extinct altogether. Upon the darkest hour Twilight had to make a choice that changed Equestria’s future forever.

As the oncoming menace could not be stopped, Twilight knew the alliance’s only hope was to be more unified and have greater harmony. So after her armies abandoned the pony homeland altogether she declared war on her previous allies to conquer and bring under her leadership. It broke her as line after line was crossed and unforgivable act after act was committed, but after years of conflict unified the planet under her banner. Vowing that all the sacrifice would not be in vane, Empress Twilight sailed her legions back to where all the strife began.

Losses were high, but for the first time real victories were achieved. The menace was finally pushed back and back until finally the scourge was over as the last squat pony fell.

But the cost was unimaginable. In one final bid to normalcy, Empress Twilight declared the records of the last 100 years stricken, now forever known colloquially as the ‘Missing Century’. Her subjects were told to return to their lives, but now hardened by the horrors of war and betrayal the multi-race alliance would never return to normalcy. Non-ponies fled the lands of Equestria altogether escape the ‘Tyrant’, while the 3 pony tribes had grown distrustful and segregated from each other.

For next 600 years this was the standard.

Until one day, 1000 years to the day of Twilight’s crowning, an earth pony was called to meet with the Empress. This mare, Sunny Starscout, was thrilled at the summons of her ruler. Remembering the bedtime stories her father told her of Twilight and her efforts into friendship, she had hopes this meeting would give her insight into bringing back the integration of ponykind she so dreamed of.

And that’s the story of how a new generation began.