@Brass Beau
I think we all know who Equestria’s champion Internet troll would be.

Celestia is an inveterate, and perhaps invertebrate, prank caller. She invented prank calls the same day that telephones were invented in Equestria. This is a state secret. 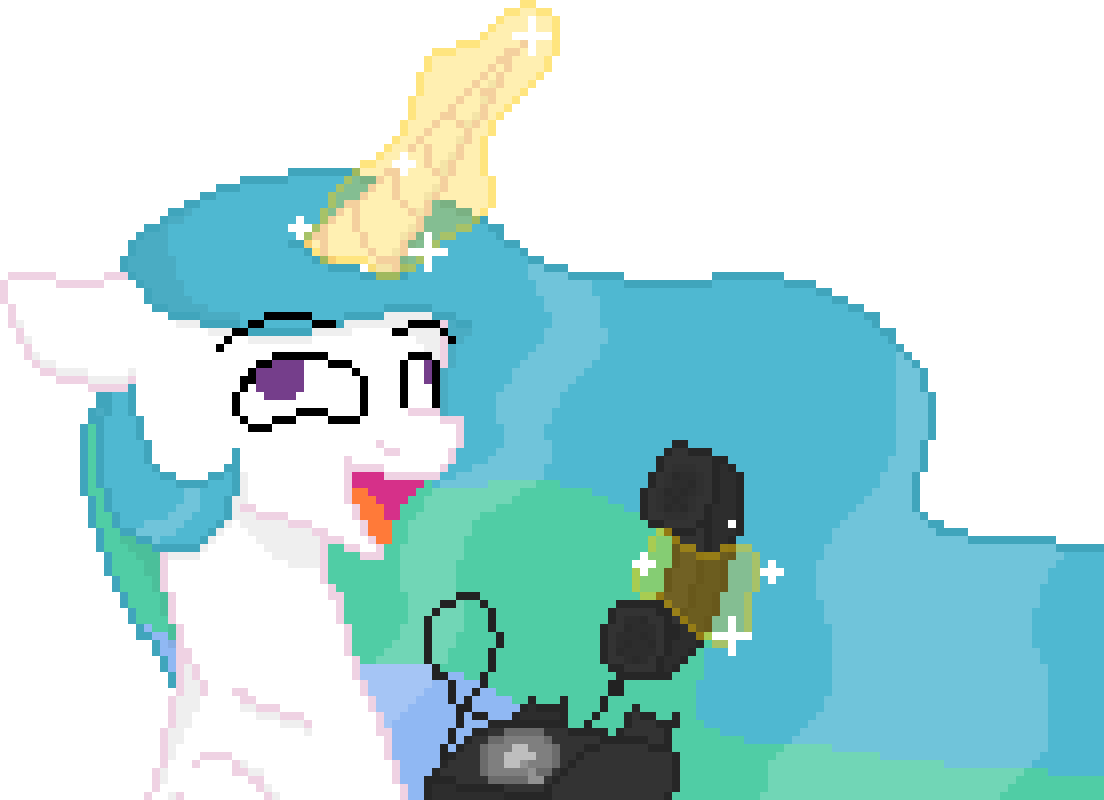 Brass Beau
Howdy from Shimmer Pope
@Background Pony #E006
Celestia walks into a store: Do you have Prince Blueblood in a can?
Shopkeeper: We do, actually.
Celestia: Well you better let him out!
Posted 2 years ago Report
Link Quote Reply

I miss the show so much
@Background Pony #E006
Clickable version of the image you posted:

She’s not the only one.

All Daring Do episodes are Rainbow Dash’s self-insert fanfics.Some may be loosely based on true stories.

The Season 9 premiere was an attempt at a thriller novel by an anonymous Friendship School student. The other main arc eps of Season 9 may have been sequels, by the original author or others.

That Flash Sentry music video is a dream of his where he tries to deal with his turbulent feelings of uselessness. (Actually, quite a few EQG music vids might work as dreams - My Past Is Not Today, anyone?)
Posted 2 years ago Report
Link Quote Reply

For the Emperor!
The necrondeer will awaken when the internet is invented, because it links in with reactivation codes.
Posted 2 years ago Report
Link Quote Reply
Background Pony #E006
@Brass Beau

@Background Pony #E006
Celestia walks into a store: Do you have Prince Blueblood in a can?
Shopkeeper: We do, actually.
Celestia: Well you better let him out!

I would have thought Celestia’s response would be “good, you can keep him!”

Though I will say I’ve enjoyed some stories with non-useless, non-idiot Blueblood and even written one.
Posted 2 years ago Report
Link Quote Reply
user4897

Princess Skystar is a jazz singer, and is a part of Princess Luna’s Canterlot Jazz Band
Posted 2 years ago Report
Link Quote Reply

Brass Beau
Howdy from Shimmer Pope
All the lords and ladies of chaos across the MLP multiverse, such as Discord, aren’t actually gods of chaos but stole a portion of power from the chaos dimension.
Posted 2 years ago Report
Link Quote Reply

@Background Pony #E006
Celestia walks into a store: Do you have Prince Blueblood in a can?
Shopkeeper: We do, actually.
Celestia: Well you better let him out!

I would have thought Celestia’s response would be “good, you can keep him!”
Though I will say I’ve enjoyed some stories with non-useless, non-idiot Blueblood and even written one.

and me
Posted 2 years ago Report
Link Quote Reply

For the Emperor!
@Brass Beau
Tzeentch: I’m missing approximately .0004% of my power
Posted 2 years ago Report
Link Quote Reply
Background Pony #E006
Here’s a list of semi-random stuff that’s popped into my head, much of it contradictory.

Discord is actually Nyarlathotep. He’s pretending to be nice to Fluttershy because he’s setting the ponies up for another really big prank.

Equestria is an alternate Earth that diverged from our own timeline thirty to fifty million years ago, during the Oligocene Epoch. Intelligent ponies are descended from Miohippus but are not even the same genus as our world’s domesticated horses.

Alternately, ponies did not evolve naturally. They were created, and whoever created them had a sense of aesthetics very similar to our own. They’re cute and charming because they were designed for us to find them cute and charming. Equestria exists in a pocket universe that was originally created to be a vacation home or amusement park by some incredibly advanced posthuman organization that wrote the natural laws specifically to allow for magic, which is a fifth fundamental force there. Equestria’s creators made the pocket universe, its tiny single solar system, and all life on Equestria–and then never showed up to take possession. Its lower gravity, denser atmosphere, and higher partial pressure of oxygen are part of the reason pegasi, and creatures much larger, can fly, though magic is also involved; it’s also one reason that enormous megafauna like the hydraas and the really big dragons can exist. From the poni perspective Earth is a high-gravity death-world with thin air, no magic, and lots of dangerous predators–the most dangerous of which are the tool-using bipeds smiling at them through the portal.

Celestia is still a virgin. She was a shy and awkward filly and once she arose to alicorn status, her position as ruler has frightened away almost all suitors, other than those whose motivations are comically transparent to one as old and wise as she. Luna isn’t, though.

Celestia and Luna are very lonely, and they suppress their own carnal desires via magic so that they can govern without distractions.

Alternately, the ponies once regarded Celestia and Luna as a solar fertility goddess and a lunar harvest goddess respectively, and though they do not like being worshipped as divinities, they still take part in ancient festivals at the vernal and autumnal equinox. They don’t do the sacrifice of living beings any more–that was done away with over a thousand years ago and they are trying to make sure it stays forgotten. But they still host masked orgies at the palace, and sex with a Princess is said to guarantee good luck and good crops for the coming year. The lines for those attractions are unironically quite long.

The sex ratio of ponies is almost exactly 1:1, as it is with most other mammal species. The reason we see mostly female characters getting speaking roles onscreen is because it’s written for an audience of little girls.

Despite what we see in the TV show, which could be considered to be the in-universe equivalent of a primetime sitcom (are there still sitcoms on network TV in prime time?), ponies are every bit as capable of the darker emotions and bad behavior as humans are, which comes as a shock to humans who think they’re as innocent as they look.

Alternately, when interdimensional travel and portals become possible, there are soon serious problems with human visitors. Ponies, for the most part, really ARE as innocent as they appear and from the human perspective, most–not all, mind you–are a bit childlike. In the aggregate, talking about averages, humans are innately more aggressive, with a fight-or-flight response weighted towards fighting, where ponies instinctively flee. Humans also have a greater tendency to greed and other inconsiderate behaviors. A number of very ugly incidents have taken place, causing the Princesses to cut off contact with Equestria for humans other than a handful who have been carefully vetted, and gaining permission for entry is difficult. Is anyone familiar with Trancy Mick’s “Vilous” fantasy world and its sapient species? Humans are to ponies as sergals are to humans. Yes, the bipedal furry shark-wolf obligate carnivore death machines.
Posted 2 years ago Report
Link Quote Reply

Brass Beau
Howdy from Shimmer Pope
Celestia became an alicorn the first time she raised the sun. Luna was a pegasi that flew to the moon.
Posted 2 years ago Report
Link Quote Reply
Background Pony #E006
Celestia was a pegasus before she became an alicorn. A tall, slightly gawky-looking pegasus, with white coat and pink mane and tail. Luna was born a unicorn. A petite little blue unicorn bearing a suspicious resemblance to her appearance in S1E2.

When Celestia and Nightmare Moon fought, Luna knew (and still knows) all the subtle spells and all about magical dirty fighting–but Celestia magically just manhandled her with raw brute power because she’s just that much more powerful.

Trixie is related to Luna and the royal line, though she doesn’t know it. This shouldn’t surprise anyone, considering that they’re both blue and bombastic.

Luna and Chrysalis were in a punk rock band together in college.

Before the magic duel, Nightmare Moon first challenged Celestia to a rock-off, but Celestia doesn’t play an instrument.

For the Emperor!
@Background Pony #E006
Ponies vs. humans: Situational events.
Pony: “You… you play such a bloody sport?!”
Human: “what? You mean american football? I mean, sure, if you count the fighting outside the game…”
Pony: “What about the HEAD trauma???”
Human: “I mean, I guess… but that’s a part of the fun!”
Pony: * Shivers in fear and disgust, and some other things largely alien to them. *

For the Emperor!
@Background Pony #E006
Chrysalis: “What do you mean, we can’t hang out anymore? We were like, best friends in college!”
Luna: “I know, hun, but we both have responsibilities now. But for the sake of old times… one last jam-out?”
Posted 2 years ago Report
Link Quote Reply
Interested in advertising on Derpibooru? Click here for information!