Dogs
And now all episodes watched.
NGL I had more fun watching a couple TYT than the entirety of MYM. Not bad, but definitely a downgrade from what we’re used to.
Posted 4 months ago Report
Link Quote Reply

I’ve seen all episodes and MYM isn’t terrible, but not very good either (still better than season 9 of FiM). Sparky like all baby characters is cringe and I feel like he exists solely because the writers wanted a G5 version of Spike. He’s like if Flurry Heart and Spike had a baby.
Misty’s going to redeem herself after Opaline betrays her, having lied about giving her a cutie mark, isn’t she? This always happens. Everyone will see this coming.
I miss G4. G5 isn’t the same and I wish it had been separate from G4.
Posted 4 months ago Report
Link Quote Reply

@Phoenixflambe
Yes, but then again, this usually happens with any kind of media. Misty would give Opaline power, then Opaline would either abandon her or try to kill her without giving her a cutie mark like she promised, and then the mane five will reform Misty who will then defeat Opaline.
I’m kinda convinced that Starlight and Spike got together and are Sparky’s ancestors since one of the episodes was pretty much A Royal Problem done all over again (and it wasn’t nearly as good).
Posted 4 months ago Report
Link Quote Reply

sTs trinity
@angryprogrockbrony
how would two different species make such a spawn tho?
Posted 4 months ago Report
Link Quote Reply

sTs trinity
@angryprogrockbrony
yeah it’s the same with tempest shadow.
Posted 4 months ago Report
Link Quote Reply
Background Pony #CBDB
Have now seen the other seven episodes in Chapter 2, here it is very obvious that the writers bet on minimal world creation through the “keep it simple, stupid” rule (KISS) so that in many places it feels like an insult, and the logic did not hang quite right in many places. The misery from the preparatory work on the movie continues in the MYM C2, although it picked up towards the end.
E2; Growing Pains;
”- If You´re seeing this, magic is now more powerful than it´s ever been… [ ] and Earth Pony magic has been activated for the first time in the history of Equestria! Magic is alive. Always changing, growing stronger.. [ ] There are evil forces out there who will want to exploit it. Once a pony tried to steal all the magic in Equestria for herself - and almost succeeded. I did all that I could to protect it from… [ static] by summoning all of my magical strength to achieve placing the magic in the crystals and the [static]. But the spell is broken! You are exposed to the world once again. You must watch out for Op- [static] Before she op… [static] I´m with You.[end].“
This is character assassination as far as it goes, and literally rendered the G4 lore useless. She was clear about the evolution of magic and knew that it will become stronger with time, and predicted that the earth pony magic will become so strong - but “the first time” - what? This is 120% KISS. She then admitted that she took everyone’s magic to protect it from the enemy - shielding Equestria from the rest of the world. This is not Twilight Sparkle from S8-S10 in G4. This is a stranger. The IDW comics completely break with MYM on this basis, where the more experienced MLP writers get it right.
And this is shown in E6 when Sunny told the story of Twilight, she had concluded based on the events of E2 that it was Twilight who caused Equestria’s collapse because she took magic from the ponies because she wanted to protect them (Sunny didn’t mention the unknown enemy) so that the various tribes split and remained isolated from each other. In the movie, she got the impression that the separation and the loss of magic happened at the same time. She defended Twilight’s actions by stating that this was due to her love for the ponies.
The character assassination is elaborated. And it seems that Sunny thinks there was a conflict when an earth pony was injured by a unicorn. Is this intended for toddlers younger than seven? If this is how the MYM team treats G4, then it is impossible for G5 to move forward, when it is to be detached from G4.
But what is completely incomprehensible is the phrase “I´m with You” - this is said in a recording intended for ponies many, many years later. This confuses both children and adults. Two important sentences are missing; “- and the -”, it meant that it is not only the Unity Crystals; and “Before she op…”, what would Opaline open if she has the ponies’ magic?
E3; Portrait of a Princess
E4; Ali-Conned
E5; Cutie Mark Mix-Up
E6; The Traditional Unicorn Sleep-Over
E7: Hoof Done it?
Not much, but Misty, Izzy and Zipp got through the episode in up and down, here it is revealed that Misty can’t use magic - possibly because she doesn’t have a cutie mark - again against the G4 lore as foals without cutie marks can use magic. It was already revealed that in addition to wanting her adoptive mother’s acceptance, she also wants her own cutie marks and thus can use magic. She experienced friendship with the Mane 5 in E6 and later in E7.
E8: Have You Seen This Dragon?
Now we are in the right keel. Misty struggles like a criminal, and managed to take some magic with her to Opaline after a lot of trouble.
MYM Chapter 2 is… controversial. There is a lot that does not fit in, even if things from other media such as TYT are taken in. There is too little background, too much KISS and little collaboration with other media such as TYT and IDW Comics. The writers behind MYM Chapter 2 improved together with the 3D artists, but a little too much freedom and too little respect. E2 and E6 weren’t good for the connection between G4 and G5, it’s like there was an alternate G4 with a different Twilight.
And again as in the movie, it is the characters who carried the weight brilliantly, even if there is too much KISS dumbing down.
I prefer the IDW comics. It’s very clear that G5 still hasn’t fixed the problem when the “lost magic” aspect was chosen instead of the “post civil war” aspect. Possibly because the same people who were responsible for this continue to have influence.
Posted 4 months ago Report
Link Quote Reply

Grumpy and antisocial
After checking the non-English dubbing credits of the MYM series, I think I finally figured out who Diggy is! Here (it’s the Earth Pony): 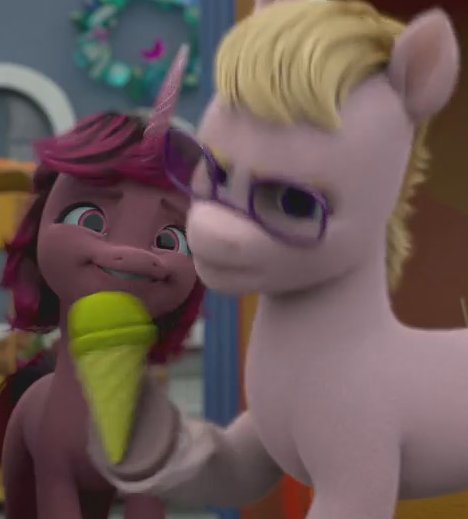 So I just saw The Traditional Unicorn Sleepover, and it was pretty enjoyable. There was some tension, wondering how long Misty could keep getting away with it.
I need to get caught up on the comics. The disconnect between Sunny’s story and Misty’s story tells me that we’re still missing important info.
The fact that Celestia was able to rule for 1,000 years without incident has nothing to do with her merits as a ruler. Those 1,000 years just happen to take place during an extremely convenient 1,000-year long Eye of a Hurricane. The last thing to happen before this Eye was The Royal Sisters losing their connection to The Elements of Harmony, leaving Equestria wide open to an attack. The Mane Six showed up just in time for the Hurricane Wall to hit.
Posted 4 months ago Report
Link Quote Reply
Background Pony #80C2
@angryprogrockbrony

Misty’s going to redeem herself after Opaline betrays her, having lied about giving her a cutie mark, isn’t she? This always happens. Everyone will see this coming.

And this is bad how? She is different. She isn’t Sunset Shimmer neither Tempest Shadow.
Posted 4 months ago Report
Link Quote Reply

About TYT, specifically the episode where Sunny gets a message from her dad about a blanket, I don’t get how the fuck the mane five coming together could have been predicted years before they were born, unless maybe somepony time traveled or Twilight somehow saw the future. Also, she didn’t gain colored hair until after the events of A New Generation so she shouldn’t have it as a baby.
About Chapter 2 being too simple, this is pretty much expected for any new kids show. Season 1 of FiM had very simple plots like in The Ticket Master. It doesn’t help that a lot of the episodes are just recycled ideas from FiM, especially the episode where Sparky pulled a Starlight and swapped Sunny and Hitch’s cutie marks.
@Background Pony #80C2

Misty’s going to redeem herself after Opaline betrays her, having lied about giving her a cutie mark, isn’t she? This always happens. Everyone will see this coming.

And this is bad how? She is different. She isn’t Sunset Shimmer neither Tempest Shadow.

You’re right. It isn’t the same but that doesn’t mean it is bad.
People would still complain if it was a reboot and compare it to G4. Saying how great G4 was and everything.

G5 isn’t bad but it’s nowhere near as good as G4. Maybe I don’t like the 3D animation or TYT, maybe I’ve gotten so attached to the mane six from G4, maybe I’m just sad about the fact that G5 takes place in a future where not only is everypony from G4 dead, but they’ve all been erased from history.
G4 was good until season 9. Had MLP ended somewhere between 2015 and 2018, neither Pony Life nor G5 ever existed, and Hasbro did nothing except sell toys, I would have been satisfied. While I did want to see Grogar in G4, him not appearing at all would have been much better than Hasbro making him the joke that he was with that stupid plot twist.
Posted 4 months ago Report
Link Quote Reply

Dogs
Zephyr Heights has their own currency and use the royals as the face on the dollar.
That’s neat. But now I’m wondering if that’s legal tender in the other towns.
Posted 4 months ago Report
Link Quote Reply