@Ring Team
here’s a thought to tickle our brains. I think Starlight in Season 5 was not brought up enough only anticipation for the Season Finale. She could have appeared in multiple episodes building up tension over time in significant ways not just a cameo in an episode. It could have made Starlight a more interesting character.

That would have made her much more interesting. I already talked about it here, but I agree. Considering how season 5 ends, I don’t believe the writers either have thought of that episode since the beginning or actually believed in the story of that finale.
I think with the proper changes in the character (simple yet specific changes), Starlight would have been a great character that would have enhanced the show. Hopefully the G5 writers will make it better with Misty, for a couple of reasons:
While I don’t watch Tell your Tale, I have high hopes on Make your Mark. I think the chapter 1 was better than chapter 2, but considering the writers made much more work in the beginning than what Josh Haber did in season 5, I have faith in these writers.
Posted 2 months ago Report
Edited 2 months ago
Link Quote Reply
Background Pony #9E60
In several episodes in C2, it is noticed that one of the cards against the window under Sunny’s bed shows a shooting star - with Twilight Sparkle’s cutie mark, the eight-pointed star with dark pink and white points, her magical symbol which was already in G4 in dark pink.
The eight-pointed star is used as a symbol of the Wishing Star in Zephyr Heights, when Wishentine is celebrated with a concert.
How many more hints are needed?
Posted 2 months ago Report
Link Quote Reply

What kind of untapped powers did Izzy have?

This isn’t a rhetorical question, what kind of powerful magic is Izzy secretly harboring managing to spin snow around and turn snowponies to life?
Posted 2 months ago Report
Link Quote Reply

Music Connoisseur
@icicle wicicle 1517
It would be like Pinkie in the series finale when she got Grogar’s Bell ;P
Posted 2 months ago Report
Link Quote Reply

What kind of untapped powers did Izzy have?

This isn’t a rhetorical question, what kind of powerful magic is Izzy secretly harboring managing to spin snow around and turn snowponies to life?

The unicorns have different strength levels from the weak to the strong based on mana reserves, knowledge and training. What Izzy has demonstrated - she is still struggling to gain control, a little Derpy here - is on the same level as Starlight and the unicorn Twilight. And she does it with her instinct that seemed to be in the Pinkie mode.
That makes her the strongest unicorn in the G5, but she won’t stand a chance against Starlight - yet. She simply flukes and that is her strength, as with Pinkie in the G4, seeing that her friends have got used to her whims, she is in the crossroads between a genius and a madmare. And we love her for it.
Posted 2 months ago Report
Link Quote Reply
Background Pony #E52B
Not trying to rag on Zipp, but it would be nice if she could be enthusiastic for one of her family’s traditions. Her “bleh” attitude towards everything is getting a little old imo.
Posted 2 months ago Report
Link Quote Reply

Dogs
Snow Pun Intended
The title of the episode finally matches the title of the upload again.
We begin with Posey. So right off the bat we start off strong.
Not gonna lie, the gag of Izzy hiding in a snowmare of herself caught me off guard and was a good one. Not just for being an Izzy moment but also a good Hitch moment.
You really get the sense that the community really does know each other, as they were all having fun hitting each other with snowballs but knew things would get ‘not fun’ fast once Posey was hit.
Oh so this does follow up on the Holiday Special with this being the first snow season in the town. Nice, but now I can’t help but notice more how everypony has winter gear at the ready.
Posey joins them on the Marestream. You know, everyone thought Sprout would be the 6th member of the group. Then Misty came along, and now everyone thinks she will be. But I’m totes for the idea of Posey joining the Mane group.
Honestly a very subtle character moment with Hitch with the list. Rather than deny that Pipp’s idea was on the list, thus somehow disappointed either her or his own organization, he implies that they can do it as long as they have time. A workaround that lets him not admit he was wrong but at the same time still be a team player.
Ah the Prometheus School of Running Away From Things. A classic. This time with a giant snowball.
Posey smiling. Somehow better than her screaming.
Ah there’s the screaming. Once again though, how would they have snowboards? I can at least get warm clothes regardless of a winter, but snowboards are something with a specific use.
For once Sparky actually solved a problem instead of making one. And Posey ends the episode in a rare moment of happiness. Nice.
The last few episodes were kinda so-so but this one was really fun. In retrospect it’s pretty surprising it took this long to get a Posey episode, but thankfully it wasn’t a dud. And the lesson at the end was a wholesome one; some people just enjoy different things and that’s okay. So yeah, a big plus this week.
Posted 2 months ago Report
Link Quote Reply

Zipp Dripp!
The first time watching, I was going “I swear to god they had better give Posey a good ending”. I liked this one a lot more the second time, knowing that it ends well for her.
@Dustcan

You really get the sense that the community really does know each other,

@Dustcan
Agreed on all counts - I would say that overall, this is one of the better “Tell Your Tale” episodes.
Posted 2 months ago Report
Link Quote Reply 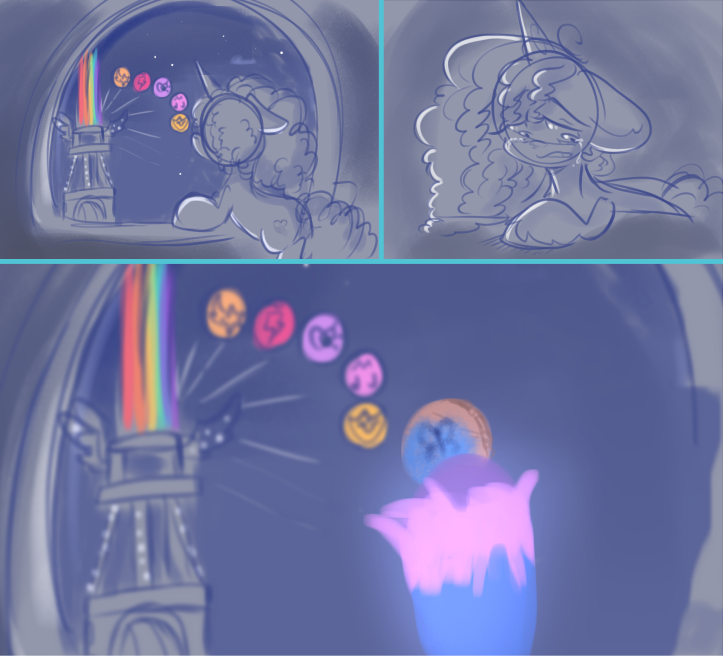 sTs trinity
@DerpyFast
i sure hope she becomes a part of them after being redeemed.
Posted 2 months ago Report
Link Quote Reply
DoctorWTF

Zipp Dripp!
I thought more about Posey. I actually think she’s given a surprising amount of nuance.
It’s one thing to not like change. But that one scene with Dahlia isn’t just mean and uncalled for; it’s hypocritical. It’s okay for her to not like change when it mildly inconveniences or annoys her, but she has no trouble rubbing it in when change negatively affects Dahlia’s livelihood. So she definitely deserved that period where she was the Squidward of G5.
But I think G5 ultimately meets her halfway. She makes an appearance on Pipp’s podcast, and they talk about how she’s found a constructive way to deal with change. Winter Wishday has her checking out the Carousel Concert and having a valid reason to not really like it. And Snow Pun Intended gives her legitimate reasons to not like winter or snow, and throws her a bone at the end.
Posted 2 months ago Report
Link Quote Reply
Interested in advertising on Derpibooru? Click here for information!