Grumpy and antisocial
I don’t know if anyone has already commented on this here, but a user on another site was able to decipher almost all of the text seen in that book at Grandma Figgy’s house (and by all, I mean what we saw in the special). Apparently the three guardians in charge of guarding the Unity Crystals eventually became distant and forgot their purpose. 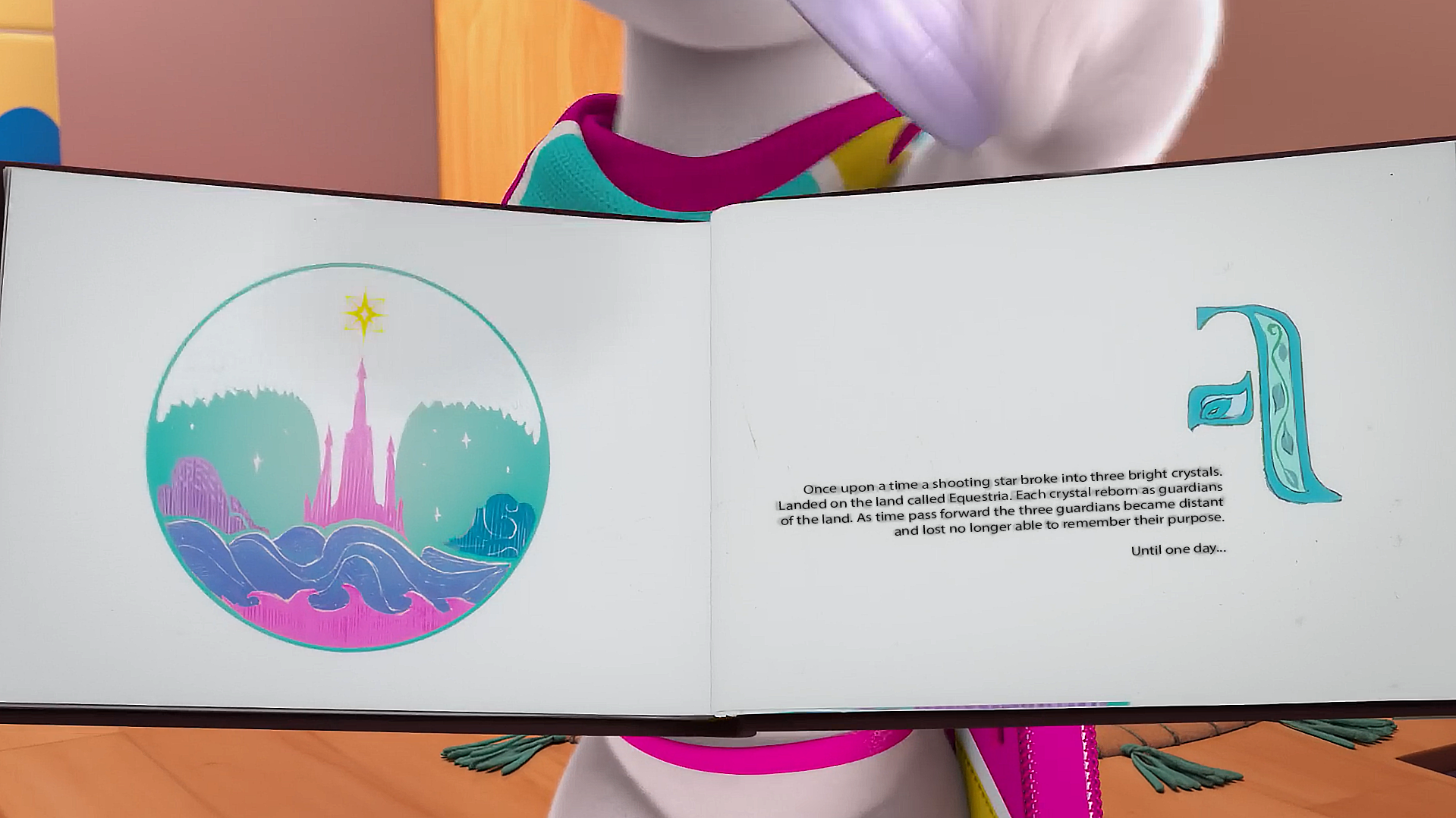 I don’t know if anyone has already commented on this here, but a user on another site was able to decipher almost all of the text seen in that book at Grandma Figgy’s house (and by all, I mean what we saw in the special). Apparently the three guardians in charge of guarding the Unity Crystals eventually became distant and forgot their purpose.

It took time, but now the resolution has become very good so you can finally see the details. The hypothesis about the three unicorns who could be alicorns was based on the cover of the book and the sentence that the crystals - presumably the Unity Crystals - had become “guardians”.
Now we have a new hypothesis; this is from the first generation after Equestria’s collapse when the three tribes were still living together, and the side of Ice vs. Fire could be the moment when they separate and start to drift apart. This explains Sunny’s story about how the tribes split up in C1, she and her father may have found out what happened back then, but as I said, the writers behind the book are obviously not very familiar with the folkore they wanted to immortalize before it was forgotten .
For the three guardians are not the unicorns from the cover - which does not have an explanation yet - but an earth pony, a unicorn and a pegasus and that may be when the magic works for everyone. But it’s only in the first page of the book that we saw magic in use. The book is obviously about the unicorns who had become mythical creatures when young Fizzy read about them. We do not know how the three tribes separated; but the sentence “ - no longer able to remember ther purpose -” is perhaps the first confirmation of the hypothesis of collective amnesia. It could also be due to loss of community after Twilight Sparkle disappeared.
It is said that the crystals came from a shooting star, which could be the Wishing Star which is clearly in connection with Twilight Sparkle, she may even have become the star in a dramatic time that the ponies could not long remember.
The book intended for fillies was published to build up the memory of the celebration which has still not been fully explained, including why a seasonal celebration such as the transition from autumn to winter had become as important as Christmas in our world and is celebrated with fierce zeal by the ponies . And the writers seemed to have had a lot to sort out, so there’s a lot that didn’t add up, like the silhouette of the Crystal Royal Palace, the three unicorns in the cover and the depiction of Zephyr Heights.
The book is yet another example that the team at MYM is not on the same plane as TYT and IDW. A lot of people had reacted negatively to Sunny’s story about how the magic disappeared, especially the one about Twilight doing it “out of love”.
Posted 2 months ago Report
Link Quote Reply

Didn’t know chapter 3 was out, so I’ll try to find time to watch it.
Posted 2 months ago Report
Link Quote Reply

sTs trinity
@Ring Team
It’s only winter wishday.
Posted 2 months ago Report
Link Quote Reply
Gipercrafter
@Background Pony #9E60
>the first pegasi queen might be Cozy Glow
>At least the documented name that Pipp knows is not Cozy Glow. The name of the first queen sounded in ASMR “Princess For A Day” from the Calm application. This is the official record. The name of the first queen is Peggy Zephyrina (spelling may be misspelled, I write in a different language).

Very interesting, this is lore that is needed. “Peggy Zephyrina”? So that explains the name Zephyr Heights, but then it means that the mountain peak that the castle rested on, C3 showed this quite clearly - had another name before the first pegasi queen. And it is possible that she was the first “guardian” of the Pegasus Crystal which, according to the book, “may have fallen from the shooting star” - although C2 has confirmed that it was Twilight Sparkle who created the crystals.
So the Cozy Glow option is now deleted. Sad, but it has been noted that the MYM team has squandered so many opportunities - especially in the first episode, the trailer in advance suggests that Opaline was behind the runaway magic. Which turned out to be completely without logic, how could the Earth Pony Magi go berserk and just come under control so easily? This is one of many logical short circuits in MYM, TYT and IDW are better in comparison. Many look towards TYT as seen with the Marestream to more easily understand what is witnessed on a logical basis.
I’m not sure if it’s possible to connect the G4 lore with G5 more, it seems that the MYM team couldn’t decide and pretended to have split in two; minimal G4 connection over a long period of time, several thousand years; or direct transfer from G4 to G5 down to just a few centuries. Also, there is a bit too much G3 in the G5, most of the episodes in C2 were weak, with few and scattered highlights, which then picked up in the last two episodes. C1 produced a ton of controversy surrounding magic, and C3 seemed confusing for actual lore building. TYT is more G4-imprinted despite its character, possibly because it was not age-restricted in contrast to MYM.
This cannot continue. MYM must be returned to G4 standard, or the Alternative Universe rule must be inserted on MYM and the G5. Then G5 will be to G4 as G1 was to G4, an alternate past.
At the very least, the mystery of Twilight Sparkle’s connection to the Wishing Star is encouraging - as we’ve seen, Zipp was never told the story of Wishentine by her mother. She found out about the unusual snowfall by studying the book about the unicorns, and concluded that it was a spell meant to invoke winter weather. And this revealed that the Winter Wishday is not in the same time period as Christmas in our world. This in itself is very good, and the idea of ​​the Wishing Tree taken from the G1 comics and G1 Twilight is inspiring.
But as the book itself testifies; the MYM team needs to decide whether to continue with the G4 lore or not.
Posted 2 months ago Report
Link Quote Reply

Opaline, Arcana Mistress
Garble’s hobbies must’ve been documented somewhere in the Bridlewood library since I’m just getting his vibes hearing Onyx’s poems and Dapple’s bongos.
Posted 2 months ago Report
Link Quote Reply
Background Pony #9E60
The Fire is glowing
Friendship is flowing
It`s the feeling of knowing
It will soon be Wishentine
Hooves on the rooftop
The ringing of the bells
Lights shining bright on the carousel
Joyous, joyous Wishentine
The twinkling wishing star that shines
Joyous, joyous Wishentine
Sleigh bells are ringing
Young ponies singing
The season is bringing the joy of Wishentine
The gifts that we share
As our hearts all swell
As we go round and round
On the carousel
A joyous, joyous Wishentine

This is the text for the song during the Zephyr Heights Wishentine Royal Carousel Concert. The song is about “the entire story of Wishentines of yesterdaymoon” divided into six acts. Unfortunately, we only got bits and pieces of it beyond the first act. Much of the content is taken from the Christmas tradition in our world and from the hearth’s warming tradition in the G4, but primarily it focuses on two themes; the mysterious carousel (Rarity, maybe?) and “the twinkling wishing star”.
The word “season” may be confirmation that the Winter Wishday was originally the celebration of the start of the winter season. In TYT and MYM, the winter started in the Winter Wishday. The word “friendship” is interesting, this suggests a connection with the Mane 6.
The concert hall has decorations that are taken straight from Canterlot when Twilight Sparkle ruled there in the last episode of S9, including the eight-pointed star. The cutie mark on Twilight is of a dark pink six-pointed star with six white underlying points. With this in mind, her magical symbol - and the symbol of her reign - is an eight-pointed star in dark pink. This was already seen on the Harmony Tree when Celestia found the cutie marks of the Mane 6 in the past.
The song to me seems a bit contrived as if it had a much older origin and had been changed when the Wishing Star was to be hailed, along with the carousel - has anyone seen it in the G5?
Posted 2 months ago Report
Link Quote Reply
Background Pony #9F47
I need a Hitch and Zipp-focused episode done in the style of a 70s-80s buddy cop show.
Posted 2 months ago Report
Link Quote Reply
Background Pony #545C
I wonder what happened to Izzy’s old home after she moved in with Sunny. I assume she’s using it for storage
Posted 2 months ago Report
Link Quote Reply

Hollow and Cold
@Background Pony #9F47
I’m actually more certain that won’t happen than will.
Posted 2 months ago Report
Link Quote Reply
Gipercrafter
@Background Pony #9E60
If I remember correctly, Peggy didn’t occupy the castle. She was the first Pegasus queen and the founder of the castle. Just in case, listen to that recording from CALM, it has been on YouTube for a long time.
Posted 2 months ago Report
Link Quote Reply