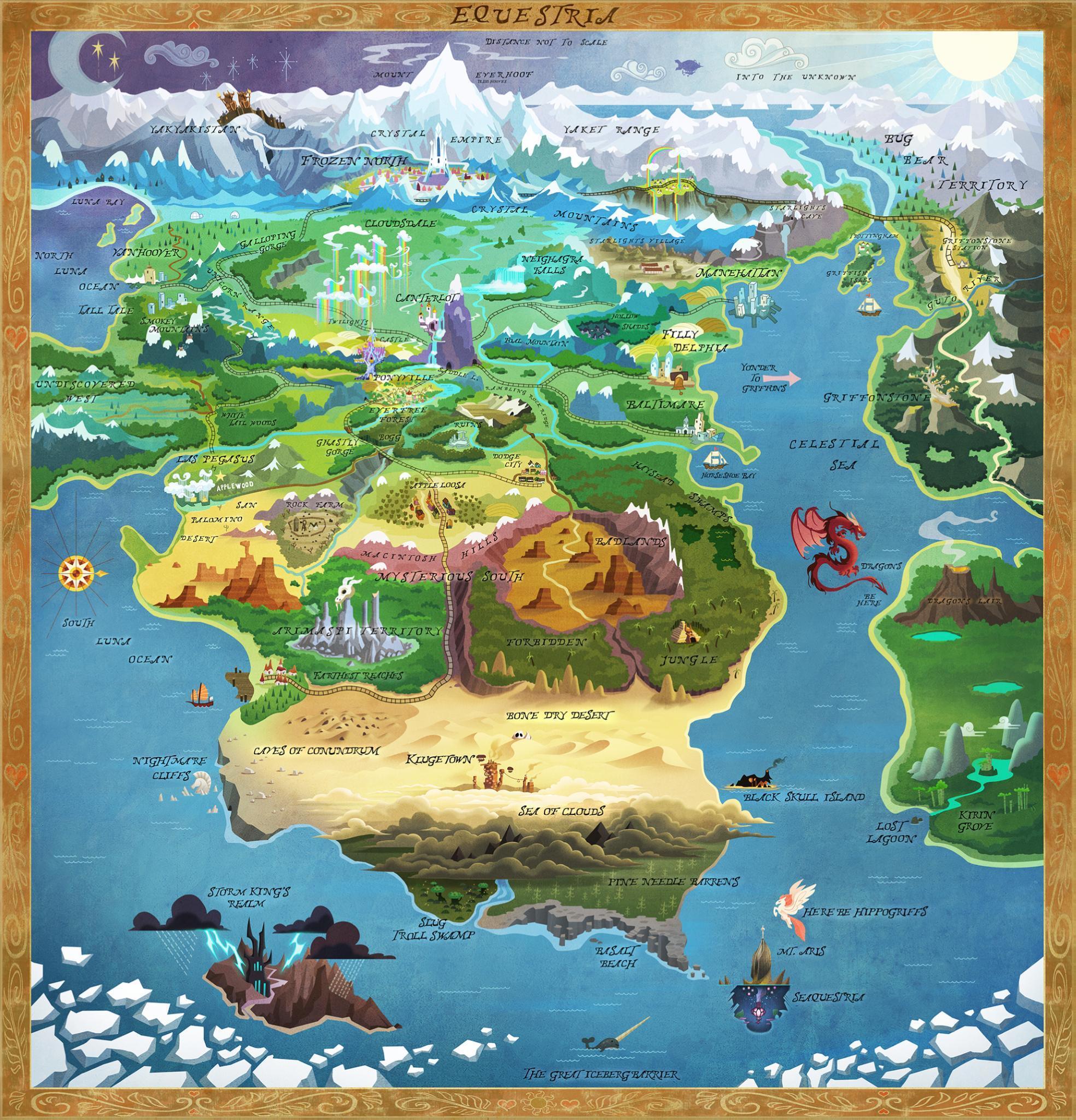 Okay, Bridlewood Forest surely is White Tail Woods (and maybe the Undiscovered West as well). As for Maretime Bay… Uh… It is either in the fartest reaches or Pine Needle Barrens/Basalt Beach.
Posted 1 months ago Report
Link Quote Reply

In this modern era, memes are the culture. So having your finger (or hoof) on the pulse of social media is a relevant skill for a leader to have.

Zephyr Heights was formerly Canterlot, Bridlewood Forest was formerly White Tail Woods and I have no idea where Maretime Bay is located (maybe it was where Baltimare was located).

This is a reuse of an outdated map from the G4 probably a thousand years into the future, which in addition is split, not in one piece.

Maretime Bay is probably on the peninsula / headland between Horseshoe Bay (which is very large) and the northern part of the Celestial Sea, because the bay itself, Maretime Bay, is much smaller. At these latitudes it is possible to have a Mediterranean climate as it is not far to warmer regions to the south; the Badlands, San Palomino Desert and Hayseed Swamps suggest that they are located south of Central America and the Sahara in our world. It is not difficult to get to Central Equestria with Canterlot / Zephyr Heights from the Baltimare area by following a river on easily accessible terrain. And if the unicorns dominate the forests of the west, including White Tails Woods, they will have no great difficulty getting to the valley where Everfree, Ponyville and Canterlot were located in the G4.

Study our European maps from the last thousand years and you will realize that much can transform very quickly. It is possible that Canterlot still exists, but only a pale shadow of it under the big city raised by the pegasi even higher up.
Posted 1 months ago Report
Link Quote Reply

So the pegasi get Canterlot now? Does this mean G6 will give earth ponies their turn on the mountain?
Posted 1 months ago Report
Link Quote Reply

Ocs,Boops,Tickles&Memes
Did any of the leaks mention if any of the g4 locations got changed or not?

The wiki is saying Zephyr Heights is the name of the mountain Canterlot is situated on. So maybe the bird pones didn’t take the nation’s capitol from the Unicorn Master Race. They could’ve just built a nest city above it, like a bunch jerks.
Posted 1 months ago Report
Link Quote Reply

Cause I don’t remember any of the materials calling the mountain that name. Or giving It a name in general
Posted 1 months ago Report
Link Quote Reply

Grumpy and antisocial
@Background Pony #121A
I eventually realized something and I even wrote it in Equestria Daily and somewhere else here in Derpibooru:
“Although Maretime Bay was designed to look like Baltimare in the map, it may actually be where Pine Needle Barrens and Basalt Beach once stood. I remember promotional photos that showed that it was a city located on a cliff overlooking the beach. Basalt Beach appears to be a cliff-preceded location (I imagine this is where Mane Six landed after being banished from Mount Aris/Seaquestria).”

Here the images from Maretime Bay that shows it being a city located on a cliff overlooking the beach: 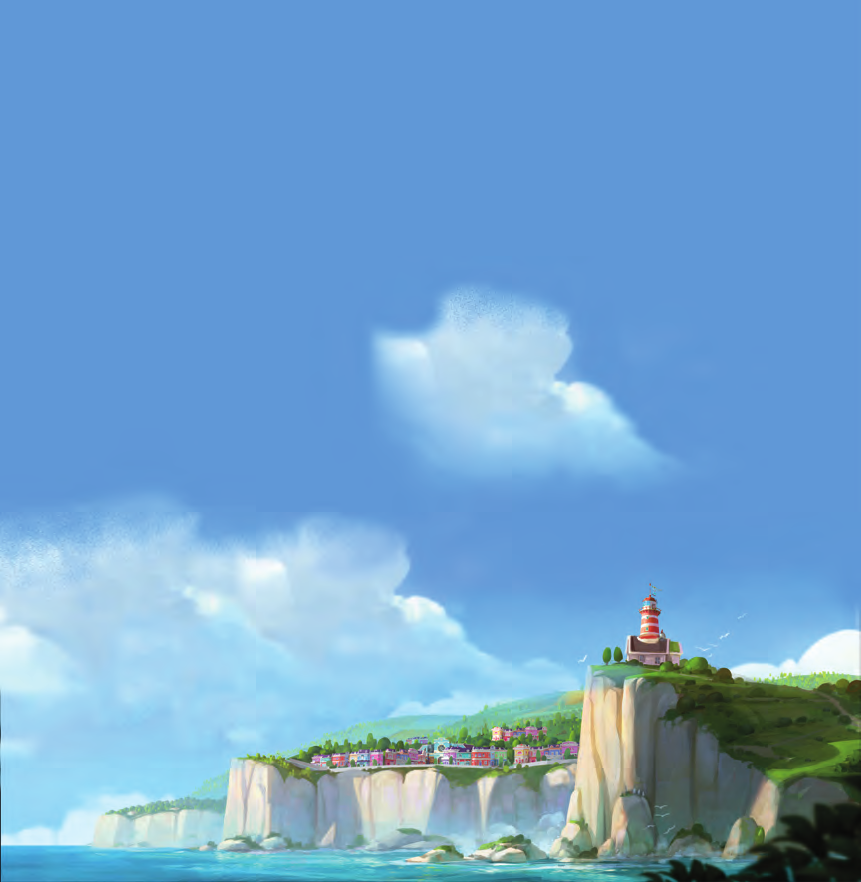 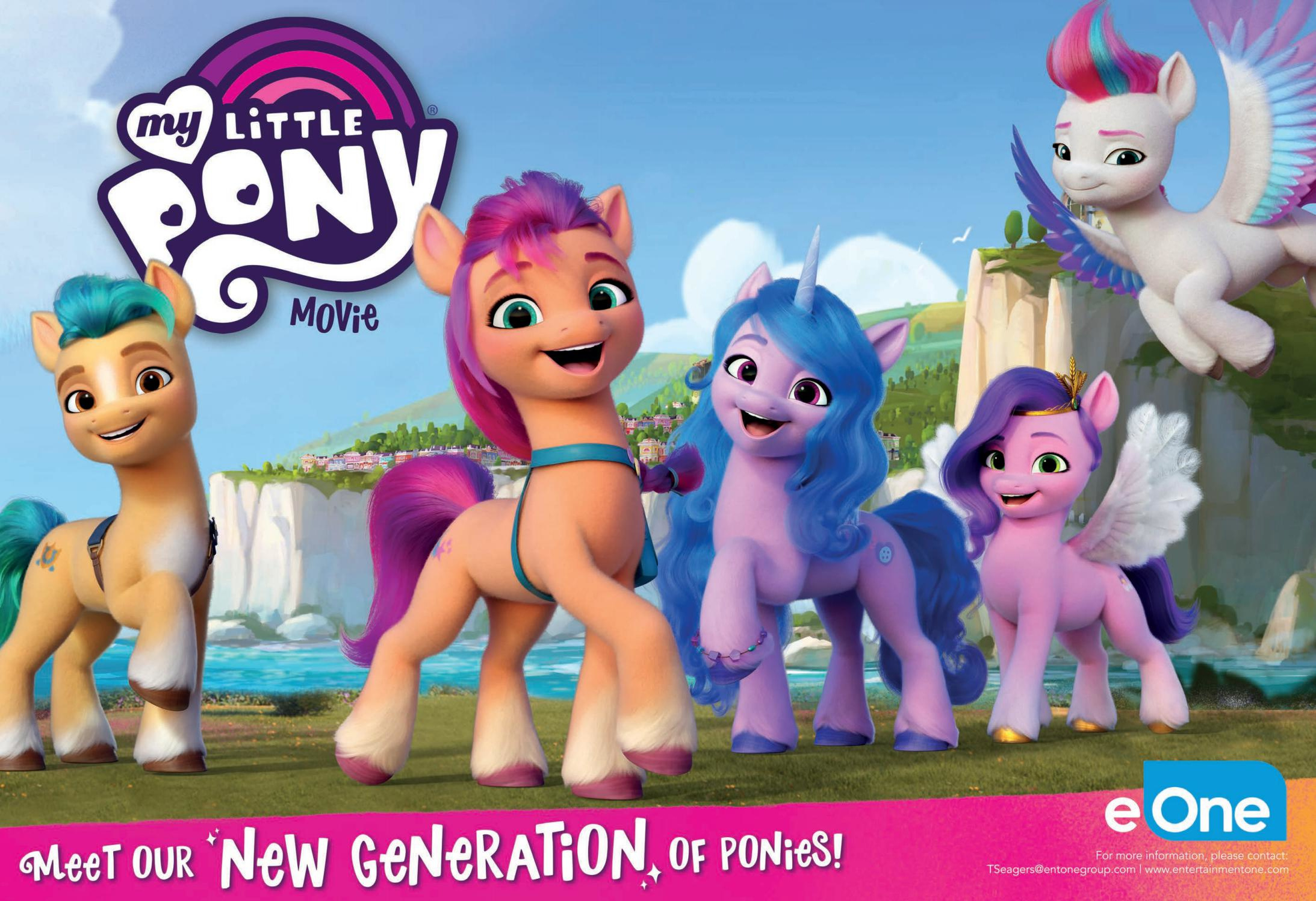 @Background Pony #121A
I eventually realized something and I even wrote it in Equestria Daily and somewhere else here in Derpibooru:
“Although Maretime Bay was designed to look like Baltimare in the map, it may actually be where Pine Needle Barrens and Basalt Beach once stood. I remember promotional photos that showed that it was a city located on a cliff overlooking the beach. Basalt Beach appears to be a cliff-preceded location (I imagine this is where Mane Six landed after being banished from Mount Aris/Seaquestria).”

The cliffs at Basalt Beach are black and very different from those in Maretime Bay. According to the G4 map of Equestria, Horseshoe Bay is very large, and we have several bays that are either equal in size or far larger in our world. So large that a sailing ship could navigate there rather than on the high seas. It is possible that Maretime Bay is a small bay at the far end of a peninsula / headland that forms one part of the “horseshoe” that gave the large bay its name. That explains why there is a lighthouse there, it was not just for ships en route to Maretime Bay, it was also for the ships going in or out of Horseshoe Bay on the north side.

And if the Crystal Sea is on the other side of Horseshoe Bay to the south, it’s possible that the kraken could be a thing in the G5, since the royal sisters found a kraken in the FiM 98. Maybe Maretime Manor in the FiM 98 is Maretime Bay in the G5, for the royal sisters seemed to have two residences, one on the east coast and one on the west coast. By locating Maretime Bay towards Horseshoe Bay where lighthouses are needed to the north and south, not far from Baltimare and easily accessible roads towards Canterlot / Zephyr Heights.

Hm … if Izzy is several day trips from her home when she came to Maretime Bay - it’s definitely an interesting story about how she could have gotten lost and come this far. Maybe mysterious forces lead her to Sunny?
Posted 1 months ago Report
Link Quote Reply

Science fiction fan
@Background Pony #121A
I keep forgetting that Izzy is supposed to be lost when entering Maretime Bay. And before we saw the new map I at least thought both areas were immediately next to each other.

Yeah, now I am questioning how in the world she managed to get that far lost too.
Posted 1 months ago Report
Link Quote Reply

Grumpy and antisocial
@Background Pony #121A
Of course, I re-checked the map once again and you’re right. The angle of this G5 map is kinda weird for me. Even though cities may have been moved around to give room to Sunny and Izzy, it still makes the positioning confusing!
Posted 1 months ago Report
Edited 1 months ago
Link Quote Reply

sTs trinity
@GoodVibesGorgeous
They look almost like those cliffs 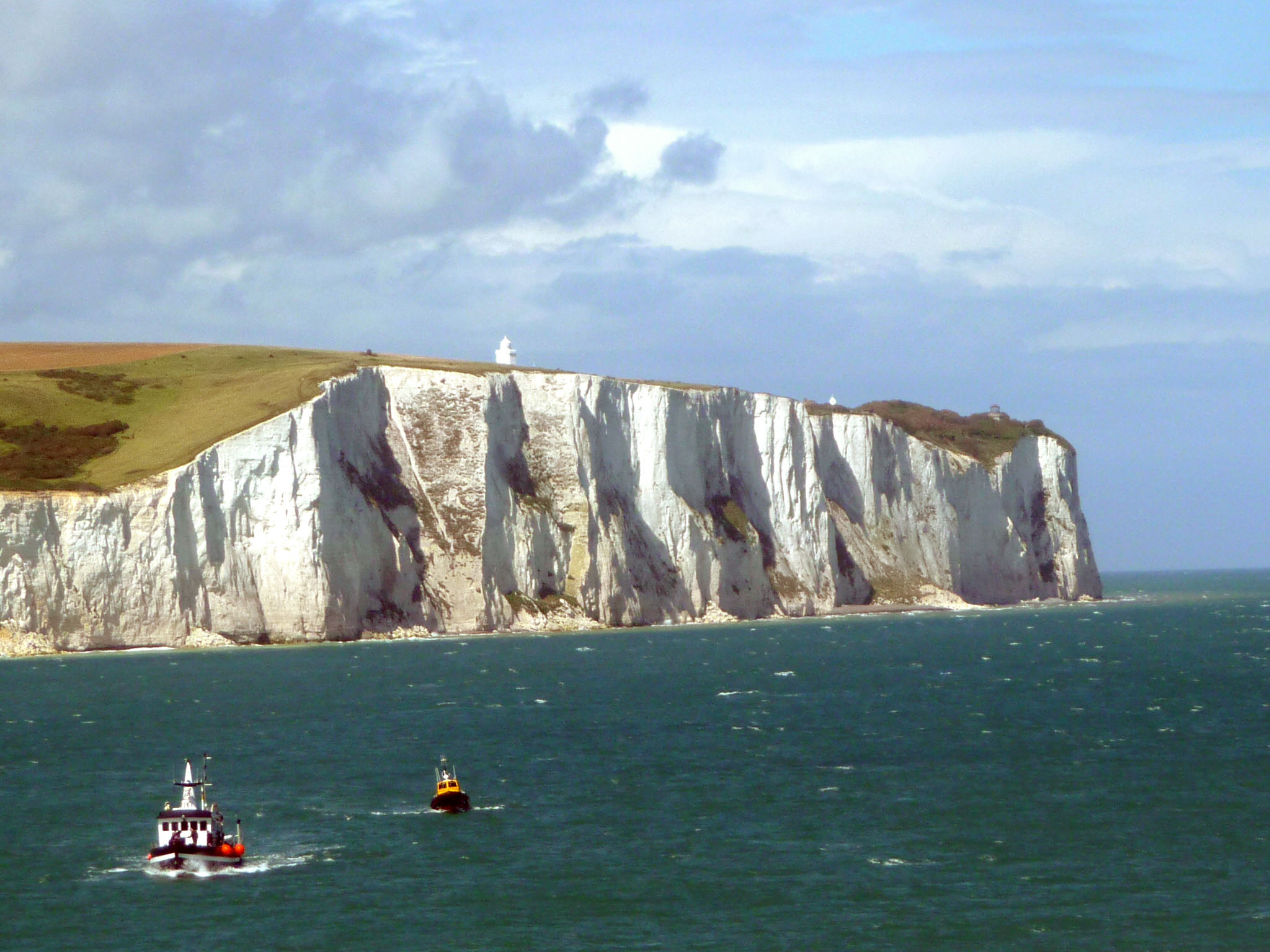 Posted 1 months ago Report
Link Quote Reply
Background Pony #466E
I wonder how many other settlements do exist. Is there are larger Earth Pony realm that has a border with the Pegasi nation or are there large stretches of no-ponies-land between the tribes? Maybe for some reason there are only few ponies left so all Unicorns live now in Bridlewood and all Earth Pony settlements are at the Horseshoe Bay.
Posted 1 months ago Report
Link Quote Reply

Will there be other species in G5 besides ponies? Hippohriffs, griffons, kirin etc.
Or will they retcon that and just have ponies?

The longma of Lauren Faust`s design may appear along with the kirins and dragons in the TV series, there are certainly many non-pony communities in Equestria that may have eventually covered the entire continent when the magic disappeared.

As the ponies have advanced technology that could only be produced through a large market that can cover more than one continent, it means that a very large world will be discovered. As the pegasi - a militaristic people notorious for military conquests in ancient times - control middle Equestria, it meant that they could have trade routes on the navigable rivers, on the major continental roads and the climatic “hubs” under their own control. Queen Haven is possibly the most powerful pony in the whole continent, and of course also perhaps the richest. She has a large empire with professional armies and perhaps airship fleets under her own power, and we do not know about the political conditions, but by controlling Canterlot - she can control the hub of the economic structure of what had been the “Friendship Empire” when Twilight ruled.

It is certain that the Mane 5 will find much new when the magic has returned, if Sunny is determined to rebuild the great empire by establishing new bonds of friendship both inside and outside the older Equestria. We could possibly have candidates for the first “friendship council”, Queen Haven, Argyle Starshine and Alphabittle who will ensure a political union of the various realms in Equestria while Sunny and the rest of the Mane 5 go on adventures and make important self-discoveries such as find new friends, new knowledge - and fight villains. If Sunny will become a permanent alicorn in many years, the “Friendship Council” will have a very important role to play in preparing Equestria for the return of the alicorn kingdom. Haven, Starshine and Alphabittle can be warned about this if Sunny as a temporary alicorn becomes known to them, it is possible that they will witness it themselves.

So Sunny and her friends will be freed from politics when they experience their adventures and spread friendships, in the process of rebuilding the lost after Twilight Sparkle. But they will have powerful forces behind them. The unicorns with magic, the pegasi with their armies and the earth ponies with their strength and numbers.
Posted 1 months ago Report
Link Quote Reply
Background Pony #121A
@DaddyMakesMeEUHH

@Algebroot Neogears
Maybe she accidently saw something magical, which teleported her close to Maretime Bay?

Maybe the Harmony? Izzy seems to be the key to how they can remove the curse that holds down the magic in Equus, and it is possible that she was among the unicorns who had found the magic recipe on how to return the magic. If she suffers from loss of memory and could only think of certain things, such as seeing the crystal in the jewel on Queen Haven`s crown, it can give a shred of mystery to the adventure. It is possible that Izzy was “sent out” to find the elements that could lift the curse, and Sunny was probably the first of the elements. We do not know how Sunny’s father got the books after Twilight, but it is possible that he got “help”.

Maybe the Harmony after a long time finally launched her counterattack. And Izzy is her missile. I hope we will not know how the magic disappeared, in the hope that there is a powerful villain in the background that the Harmony is fighting against.
Posted 1 months ago Report
Link Quote Reply

sTs trinity
i just thought of something, if cloudsdale and some other cities that relies on magic to exist, then that means the crystal empire is gone along with couldsdale and other cities that needs magic to have existence in equestria, cause without the magic inside it’s heart, the heart will fail to keep the city from disappearing into the frozen north.
Posted 1 months ago Report
Link Quote Reply
Background Pony #466E
@Shimmering Spectacle
Good point. The inhabitants probably had to abandon the Crystal Empire and settle somewhere else. Las Pegasus must be gone, too. The other cities and towns from the show, however, should be fine. Assuming they weren’t left for other reasons.
Posted 1 months ago Report
Link Quote Reply

Vortaxonus
@Background Pony #466E
either that or the crystal empire was yeeted into the future or something like it did last time.
Posted 1 months ago Report
Link Quote Reply

sTs trinity
@Vortaxonus
Well maybe yet still, if the crystal heart’s magic is gone, then so would the empire, simply speaking.
Posted 1 months ago Report
Link Quote Reply
Interested in advertising on Derpibooru? Click here for information!