Music Connoisseur
@naganofan99999
No, you’re not the only one
Posted 6 months ago Report
Link Quote Reply

I think I have to be one of those fans who are invested in G5 but not necessarily in the comics, just the movie and the shows.
I said it a couple of times, but I don’t want a comic to explain something a show can’t, I want a show to speak for itself.
Posted 6 months ago Report
Link Quote Reply
Background Pony #6AEC
@GoodVibesGorgeous
It’s as off-topic as it can go and it was not made to expand MLP identity and uniqueness that was made explicitly to fucking copy another IP (Monster High to not name it),that’s what it is. I dont know what more you people need to see a series called My Little Pony can suddenly decide to be a Barbie clone without being world breaking
Video related: this is how retarded EQG “” plot and worldbuilding “” is in regard to MLPFIM,it doesnt fucking fit.
https://youtu.be/psv0CrcCI0M?t=95
It’s as if i bought the rights to M.A.S.K or Lords of the Rings and turned it into a show about the hobbits turning into The Brave Little Toaster knock off living household appliances characters or fucking cars to concurence ,i dunno, Micro Machines ?. What are you complaining about, Frodo might be a sentient washing machine but he still got the rings and Elijah Wood haircut. And there is magic in the Middle Earth so my brilliant plot point of them falling in a magic hole created by Sauron. See,this is still magic,we are having fun.And my show is called Lords of the Rings: Middle Earth, Bath and Beyond so it totally ties in. There is Middle Earth in the title, that’s where Lords of the Rings take place, i t’ s f i n e. Gandalf is stuck on the other side of the hole to work to free the hobbits but Washing Machine Frodo is helped by his new friends,the brave SciGandalf, an helpful DeLorean wearing nerd glasses with a keen interest on magic. bUT Why,you ask this strange disparity, why does Frodo into a common house appliance and Gandalf into a vehicle ? Well you see it all make sense because Frodo is a hobbit and Gandalf is a human and they also fall in love at first sight and when he came back ,Frodo make bedroom eyes at Gandalf despite showing no interest to the old wizard beforehands but hey there is also those 3 singing Barbie dolls in the second movie (they are my waifus,they are really dark elves send on the Bed,Bath and Beyond Universe by Gandalf) of this epic saga called Lords of the Rings: Middle Earth, Bath and Beyond:Let’s Rock With Our Spork Out and now people ask for the characters to show up in subsequent Lords of the Rings movie but it’s all cool,it’s all worth it they found their footing in the fourth movie after 3 shitty ones Lords of the Rings: Middle Earth, Bath and Beyond:Garage Sale Day Out,see it was all worth it and FSDGHGHFHDGHDFKJGHHDFG I HATE THIS FUCKING SHOW

Dont turn a show that you established as one about furry creatures living in a heroic fantasy world into fucking Barbie (especially after a major plot development in the main series).
G5 at least gets it, it introduced more modern elements like cellphones or presumably modern era high school that Hasbro want in their brand to market it to the tweens by making a time skip after G4 ended instead of pulling an alternate dimension out of Celestia ass (and i’m pretty sure Hitch Trailblazer is a late correction of the botched Flash Sentry non-character). Oh and the character design of EQG is ugly as hell and i’m tired of pretending otherwise. It’s bad,unequivocally bad, all of it from Sunshine Whatever to Flash dreadlocked damage control replacement and Twilight damage control doppelganger that spell out that it’s pointeless to be interested in copies of the original. It doesnt matter how polished the turd is, the problem was at the root to begin with
@Ring Team
Probably, i’m not diminishing the contribution of others but i still firmly believe that it’s her credential as a experienced writer in non-toy related cartoon that made it special. The first idea they came out just after Faust left is this …..spin-off…… and i already made my thoughts pretty clear ^ above ^
Posted 6 months ago Report
Link Quote Reply
Background Pony #6561
@Ring Team
We don’t even know if the comics are canon or not yet. If the comics end up not being canon, you won’t have to worry about that. If the Netflix series mentions something from the comics then they are canon.
Posted 6 months ago Report
Link Quote Reply

Blissful690
I really like her mane!
@Ring Team
I’m right there with you.
Posted 6 months ago Report
Link Quote Reply

Ocs,Boops,Tickles&Memes
“Why not disguise yourself and take on a whole new identity? Worked for me!”
…
Is there something you’re not telling us “Izzy”?
Posted 6 months ago Report
Link Quote Reply 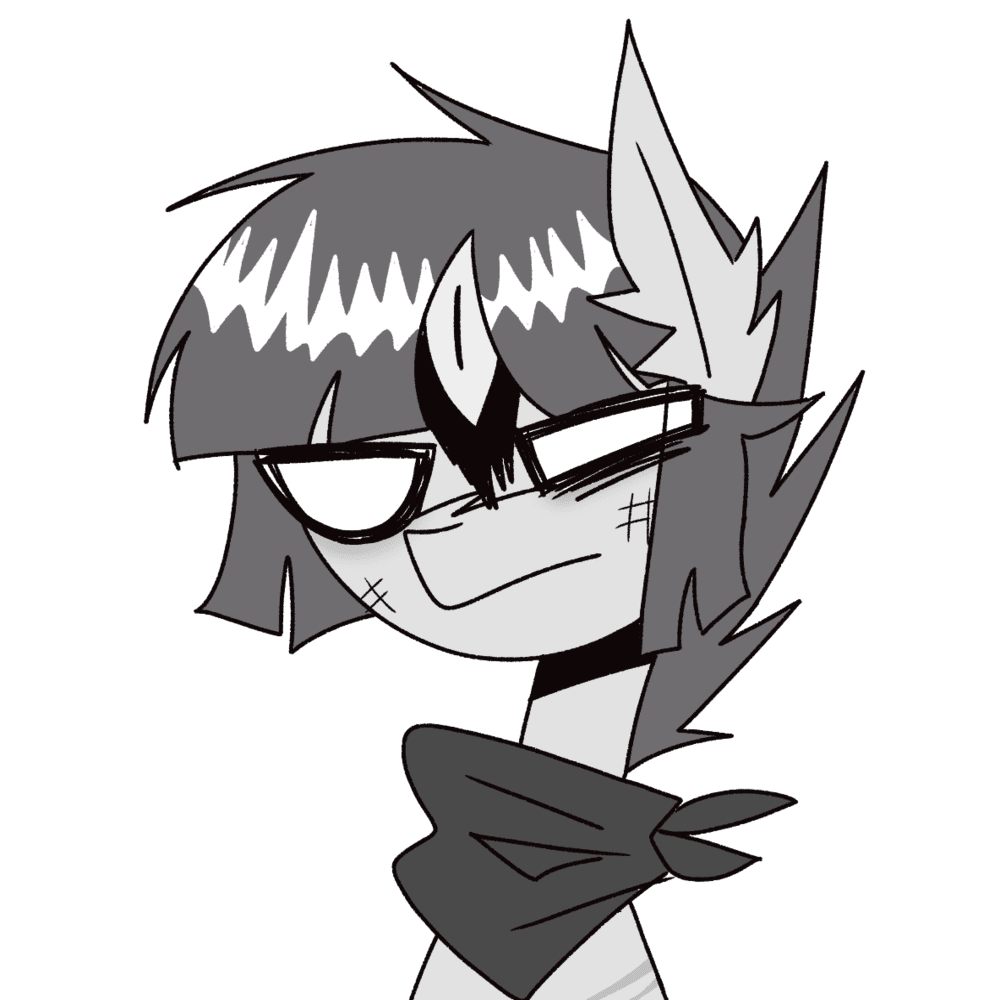 I do stuff
@icicle wicicle 1517
That Izzy is a spy!
Posted 6 months ago Report
Link Quote Reply

Explorer in Training
@icicle wicicle 1517
That took me by surprise for a second. Although I probably shouldn’t be surprised considering they already reference Tik Tok.
Posted 6 months ago Report
Link Quote Reply

Smiling Panzerfuchs 2.0
Why is it that the whole time I was watching this episode, I had “Give That Wolf A Banana” by Subwoolfer stuck in my head? ;-)
Posted 6 months ago Report
Link Quote Reply
Background Pony #84E8
The new cover of the IDW comic #7 is very interesting, as it shows Twilight sitting majestically on the throne with the three crystals that together make up the Unity Crystals. Ever since the movie it was clear that only she could have been behind the Unity Crystals and this was confirmed by Discord who explained in #2 that the Mane 6 were involved in the creation of these crystals.
But the special MYM was as close to a PR disaster as it could have been, as many people got a violently negative impression of the idea behind the crystals and the fact that the ponies had no magic of their own, and that if they just argued, it would disappear - it becomes a bit too much of coercion and oppression for the sake of “friendship”. The impression is created that the ponies had to be friendly and “kind” in order to keep their magic. Although MYM and later Discord revealed that the magic for the ponies has become deadly, unstable and uncontrolled magic that opens up gaps to unknown dimensions, uncontrolled ripple effects on the environment that can explain many strange animals in the movie and TYT - and that the whole world is put in danger .
The magic had become unstable. And Twilight was unable to solve the problem because MYM showed emotional return from the ponies to the Unity Crystals who then become emotionally hypersensitive. It will mean an intervention in the very essence of the Ponykind. She had to take simultaneous “foci” of the ponies - and possibly the rest of the world - and gather these into a single focus, the Unity Crystals which had become a dam that regulated the magic from the mystical dimension. We don’t know how it works, but all indications are that the active magic in the physical dimension came from another dimension through “foci” in magical beings - as we had discovered in G4, especially when Cozy wanted to take away the magic in S8. And we don’t know what kind of dimension it is. But Discord’s chaos dimension with chaos magic suggests that it may be the dimension where Twilight became an alicorn, meant for pony magic.
The Unity Crystals had become one, which could not be separated with impunity. In MYM, cracks were seen on the earth crystal, as if the dam were about to burst as a result of negative emotions. In the IDW comics it was found that these can be separated without the magic disappearing, and in TYT they act as a kind of on/off light switch. The movie revealed that if they were inactive, you don’t get the magic just by putting them together, as Sunny had discovered. Instead, they were activated by themselves as if they were intelligent and reacted to Sunny`s talk about friendship and the reconciliation of the three pony leaders. This reveals that the Unity Crystals were indistinguishable if the purpose was to take away the magic, and Discord was perhaps the only one in the world strong enough for this, but the magic only weakens for a brief moment. This means that no one is able to remove the magic by simply taking apart the Unity Crystals.
Then it meant that the magic had not been removed voluntarily or as a result of hostile action by an outsider; Sunny and Discord pointed out that there are powerful magical spells that protect the crystals’ integrity and substance. So to take away the magic by disassembling the Unity Crystals - it must be done magically or for the hoof of a “chosen one”. Then it implied that Twilight was responsible for removing the magic for good, throwing the world into chaos.
The cover suggests just such a scenario. The question is, why? Everything suggests that she was forced against her will to take such a drastic step that went against everyone she values. Perhaps an enemy so powerful that she and her friends including Discord had no chance against.
Posted 6 months ago Report
Link Quote Reply

Shiny Bug
@Cosmas-the-Explorer
I would assume not, since it would be treading on old ground, not to mention the time gap between G4 and G5.
Posted 6 months ago Report
Link Quote Reply

Music Connoisseur
Why the fuck is that “banana” remix song stuck in my head? It’s been replaying in my head ever since I watched the episode
The fact that Pipp’s fail video has 13 billion views even though the current human population is almost 8 billion people gets me. Not even Despacito, the most viewed video on Youtube right now has that many views.
Also, Pipp said “meme”, that’s a sign we’re truly living in the 21st century
Posted 6 months ago Report
Link Quote Reply

CORDZ2000
Draconequues Lover
@Background Pony #6561
Yeah thats more of my thing on it. Why are they a hive mind? Why wouldn’t the other mane six have other ideas on it?
Posted 6 months ago Report
Link Quote Reply

Blissful690
I really like her mane!
@CORDZ2000
Apparently their world is a lot more populated than ours.
Posted 6 months ago Report
Link Quote Reply
Interested in advertising on Derpibooru? Click here for information!