Ocs,Boops,Tickles&Memes
@Dragonpone
At this point it’s less a joke and more like a legitimate change x)
Posted 2 months ago Report
Link Quote Reply

Explorer in Training
@Phoenixflambe
I guess the new crew for post A New Generation probably have no emotional connection to Sprout, a character they didn’t even create.
Misty is someone who they actually crafted and have more of an attachment too, for better or worse. That’s my theory.
Posted 2 months ago Report
Edited 2 months ago
Link Quote Reply

Grumpy and antisocial
@Phoenixflambe
It would never happen, as he doesn’t follow the (possibly accidental) pattern the other Mane 5 characters have (sharing coat colors with Mane 6 members). And there’s the fact there’s just one unicorn in the group (Sunny’s alicorn form is merely temporary, it doesn’t count), a sixth member would have to be another unicorn (and maybe share coat colors with Rainbow Dash, as there’s nobody in the Mane 5 with the same coat color as her).
Posted 2 months ago Report
Link Quote Reply
Background Pony #13BA
@GoodVibesGorgeous
I hate to be that guy but technically Sunny’s “alicorn form” is permanent, since she can activate it at will with no time limit, only during dangerous or dire situations she happens to be in. ^^’
Posted 2 months ago Report
Link Quote Reply
Background Pony #13BA
@Phoenixflambe
Lol I remember when Sprout was the main candidate for becoming a member of the mane 5. That became out of the question as soon as Misty showed up. I really hope they don’t downgrade Misty If she does join. She has had a good buildup of her character and interesting storyline between her and Opaline. Though it may seem plausible, I don’t think she will be an actual full on member imo. We will see what happens when more chapters are released XP
Posted 2 months ago Report
Link Quote Reply Which is good, because Sprout is much better as a background character. Misty would fit the role of a new main character much better.
Posted 2 months ago Report
Link Quote Reply

Grumpy and antisocial
@Background Pony #13BA
Yes, yes. It is something ethereal, therefore it could be considered both permanent and temporary in a way.
Posted 2 months ago Report
Link Quote Reply

And that’s why Sunny is Twilight Sparkle’s successor, the upcoming alicorn for the ponykind. She didn’t have much personality development in contrast to the others - we’ll probably see more of that in later episodes; but when her naivety and shyness are replaced by insight and self-confidence, undoubtedly as a result of experience, she will be on the right path.
She has humility, honesty, kindness, faith in others, a willingness to inspire and help others, growing leadership skills where she wants to help rather than have power - the fact that she doesn’t want alicorn powers just to be an alicorn makes her the most powerful pony in the G5. In many ways she is the opposite of Opaline who craves recognition, power and fear as the most powerful that no one should dare to contradict. Sunny will be kind where Opaline will be merciless in the face of their enemies and annoyances.
Also, Sunny has an advantage of having very strong conviction and perseverance in the face of impossible odds, and this could be what makes her the future element of Hope in the end. For she is on the right track as an alicorn, who derive their strength from protecting, helping and inspiring others for whom they only wish to be of assistance, for harmony - for tolerance - for friendship.
Sunny gets stronger with time and one day she will ascend to meet Twilight and become a complete alicorn, that will probably be when everyone else thinks she was dead and mourns her. But when she returns as an alicorn after making her choice to be a princess or not, and when she knows what her destiny is meant to be, she will inspire hope in all ponies and non-ponies.
The rainbow stripe in her mane and when the earth pony magic was forced out of the mystical dimension through her actions, means that she is meant for much greater missions in her life. Because not only does she have to restore Equestria, bring harmony and friendship to all, give hope to all, she needs to give the whole world a new mission - she is the beginning of a new glory, as Twilight envisioned when she predicted the Mane 5 many centuries before.
Sunny is more than a pony. Even more than an alicorn. But her biggest and most dangerous mission is to defeat The Big Bad, who is probably not Opaline, but the enemy behind Equestria’s collapse and the dark times in Equus. Which can represent evil, hopelessness and despair. And luckily there are many years until this will happen, as this is probably set for the end of the G5.
Until then; Sunny’s will grows in her path towards her destiny.
Posted 2 months ago Report
Link Quote Reply

Dogs
Oh hey, Izzy getting the tram-turned-toyetic-flying camper was actually foreshadowed back in MYM chapter 2. Neat.
Credit goes to FOME for pointing it out.
Posted 2 months ago Report
Link Quote Reply

Music Connoisseur
@Phoenixflambe
Why not have both join?
Posted 2 months ago Report
Link Quote Reply

Zipp Dripp!
@Dustcan
Wasn’t just a throwaway line. It was on screen: 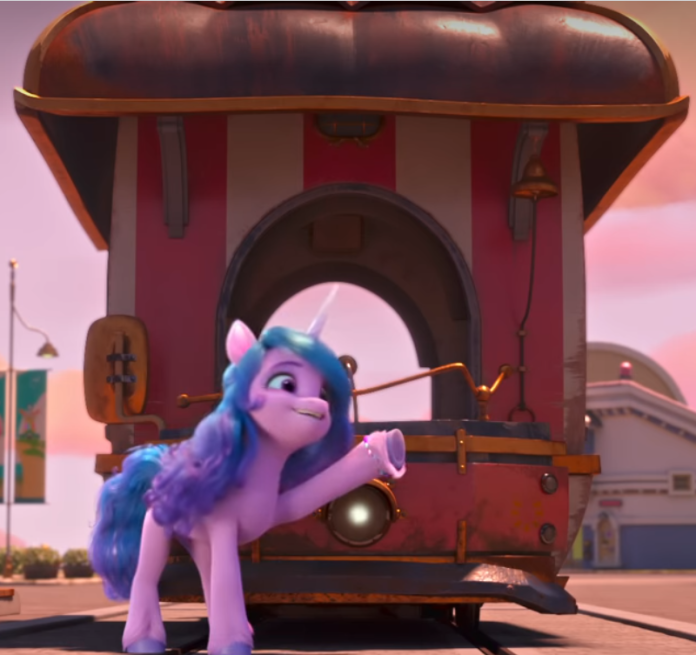 Zipp FTW
@Background Pony #E52B
Yeah I agree. Personally to me they are both seperate universes. I don’t mind if people disagree, but nothing’s gonna change my mind
Posted 2 months ago Report
Link Quote Reply

Zipp FTW
Can you imagine an opposite version of Pipp’s song “Everything’s Gonna Be Okay?”
Just a random through I had. Maybe it’d be called “Nothing’s gonna be okay” Or “Everything’s currently Pain”
Decided to do an opposite version. (Like a parody of “Everything’s Gonna Be Okay”)
Shoot, shoot! Heck! Shoot, shoot!
Shoot!
You should know now that there’s nothin’ right
Fill yourself with worry, I will tell you why in two (Mm-hmm!)
So you should freak out with this creepy scare
And you’ll realise that these are not a joke for you
Aha! Now what you’ll do-ooh-ooh?