Squidamouche
I have a good premise of a fic on chosen characters from different media that get sent to the pony world for one week. Ever wanted to see how Spiderman would react if he had four legs instead of two, or maybe how will Ghost Rider would respond to the Stare? Or see Goku have an eating competition with Pinkie Pie? The possibilities are endless. Just gotta have the right mind behind it.
Posted 9 years ago Report
Link Quote Reply

Hollow and Cold
Okay, so this happened in the Crazy Headcanon thread:

Blueblood has a list of every mare that has seriously hit on him, and has kept in contact with the less driven among them.
Nightmare Moon and Luna are both on this list, due to a mishap during her return where she attempted to seduce him, thinking he was Celestia’s husband/boy-toy.
Luna managed to make the mistake a second time.

@PonyPon
She succeeded both times. Neither speak of it, but both think about it more often than they’d like to admit.

And now I’m going to write a fic about it. This will be my first Clopfic.
Posted 9 years ago Report
Link Quote Reply

Don'think ighly o'Sicily
I don’t into erotica so I can’t say which would be the better route. I guess which ever would have the most amusing results, I guess?


On a completely different note: I am mulling over a fic idea about Applejack. Loosely inspired by a post I made a while ago about giving Applejack an ambition to be a pony country singer. But the point of the fic would be to send her to Manephis on the encouragement of her friends or something, where she tries to audition but gets turned down.

She stays there until she runs low on bits and can’t pay for her hotel room anymore, and she can’t find a proper job there to hold her over until she gets a contract. So she decides to take the train home and leave Manephis.

At this point I could bring in a bored Discord who challenges her to a fiddle contest ala Devil Went Down to Georgia where he promises her the bits or something to either go home or remain in Manephis, and if she looses he abandons here in the station and takes her money because he’s bored.


At some point I could have a scene in a bar where she sits down distressed and talks to a stallion about Manephis. The stallion would say he went there to try getting a performance contract since he has nothing else to loose back home. The conversation could then go and have him quip that Applejack has family and friends back home so she has no reason to loose her head in Manephis. This could be an extra incentive to turn back.

Doing this could tie it into another fic I had in mind so I don’t know how necessarily kosher it would be to have the two have a brief intersection. But the character in this scene would have been from Detrot. His factory shut down and laid him off and he lost his employment. His family is otherwise gone, save for his sickly mother and his adventure to Manephis would be him taking a last-chance gamble to scrape together the bits to help her out, given he can’t find work anywhere else and the rest of his friends managed to find a train ride out of Detrot.

Don'think ighly o'Sicily
I still need to figure out something that doesn’t ultimately flatten Applejack out after she surrenders. And to give her an excuse to ultimately bail Ponyville for an undetermined amount of time.
Posted 9 years ago Report
Link Quote Reply 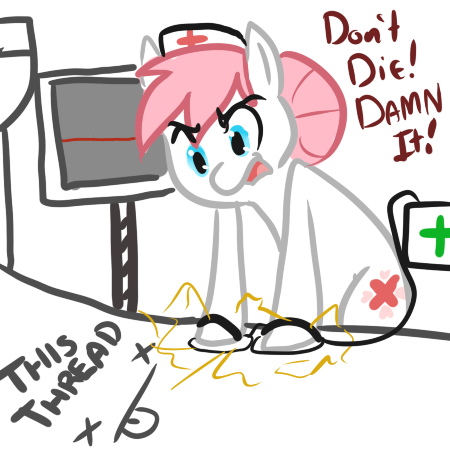 Hollow and Cold
Okay, I want to know if this is a natural feeling segway into the clop portion of part 1 of my fic.

Blueblood was flipped and slammed on the ground by an invisible force before Nightmare leapt upon him, fangs bared in a menacing manner.
“You arrogant, little, bastard. I am more powerful than Celestia will ever be!” she said as she pressed a strong hoof into his chest. “I should slaughter you right now for such disrespect.”
Her words began to deflate Blueblood’s bravado. The reality of his position started to dawn on him. He just assaulted some monster that came straight out of a fairy tale with the broken sword, called her a bitch, and threatened her with his Aunt’s wrath.
You idiot, he thought. This nutty horse is going to kill you.
“However, I might see fit to spare you.” Her expression softened as she looked him over thoroughly, and began to lighten the force behind the hoof on his chest.
Fear crept into Blueblood’s voice as he asked, “W-What do you mean?”
At first she didn’t answer. She simply moved her armored hoof against his broad chest. Slowly, almost sultry. A sort of blush could be barely seen on her black face. Her eyelids were lowered seductively as she licked her lips. Those signs all made the prince very uncomfortable.
“Oh, you can’t hide your true duty from me, mortal. This bulky exterior and fervor in Celestia’s name would mark you a guard. But this,” Nightmare mused as she wove her cool hair under his chin. “is far too well-groomed, too handsome to risk in any battle. Yes, for all her obliviousness, Celestia still has fine tastes in studs.”
“Studs!? I’m not her stu-oof!” Nightmare silenced him by pressing her hoof hard again.
“Alright, alright, her husband, or whatever she deigns to call you. The point is, I will be taking all that she has, all that she has denied me. Equestria, its ponies, their love and respect. I see no reason I should not partake of her toys as well.”
Blueblood gulped as she leaned over him, their fur meeting together. She felt cold and dusty. Their faces met.
“So what will it be, Stud? Will you break your allegiance with the Sun, and give your services to the night instead?”
Blueblood considered his options: say no, and wind up far worse than Shining Armor a few rooms away, or say yes, and sexually placate some insane pony with a vendetta against Celestia who was deluded into thinking they were married until his aunt returned.
“Um, yes?” he offered her hopefully. She leapt off of him, looking delighted. Before he could get up, however, she turned and sat on him. His muzzle was shoved into her dark vagina, already slightly wet.
“Good! Now earn your keep, Stud!” she shouted, grinding her marehood into his face.

Hollow and Cold
Difference between Drive and Spirit:

Squidamouche
@PonyPon
I thought of the discorded versions of Entropy.

Sunset Shimmer would be scatterbrained.
Trixie would weep constantly.
Octavia would go crazy and wild.
Gilda would be dull and stoic.
Screwball would be obedient like a dog.
Lightning Dust would procrastinate constantly.

Hollow and Cold
@Ore-O
Thanks.

That will actually help when I write a milestone for Screwball herself.

When she gains her element by defying the her own father for her friends’ sake.
Posted 9 years ago Report
Link Quote Reply

🅱
Wrote a little bit more, and know the direction that I’m taking it in now.
Posted 9 years ago Report
Link Quote Reply

PM me Maud pics
I wish i wasn’t so damn critical of my writing. It tends to keep me from writing anything at all if i can possibly avoid it, because i always feel my writing is completely subpar.

I thought I was the only one with that problem.
Posted 9 years ago Report
Link Quote Reply

@PaskaNaakka
Same for me, I even write the product but at the end it prevent me from posting it.
Posted 9 years ago Report
Link Quote Reply


Hell, for at least once I have a character’s death pinned down to the T.
Posted 9 years ago Report
Link Quote Reply

I’ve been playing around with a crossover for a while.

So far I just have some notes.

@Itsthinking
If you’re curious about how they look like, take a look at my walls of text since page 98 in the evil council roleplay thread. It’s not the same thing but I think they’re a representative sample of my style.
Posted 9 years ago Report
Link Quote Reply

tinyurl.com/dymbb3a
I had an idea for another random story: The Mane 6 accidentally knock over statued-Discord, breaking him into pieces. Since he’s a reality-warper, he can easily put himself back together, but decides it would be simply hilarious if the Mane 6 had to suffer such a fate. So with a snap of his paw, they literally fall apart at the seams. Now they have to find their legs, and bodies, and wings and horns. Which isn’t easy when you’re just a head.
Posted 9 years ago Report
Link Quote Reply

The Fallen Brony
I’m utterly convinced that if I decide to write any fanfic pinpointing consequences that would occur in the show but are never shown, Rainbow Dash would enter a world of hurt… Especially if I limit it to just Season 2.

It’ll start with her getting fired for wasting a raincloud on some fillies and will involve the Element of Loyalty going “Yeah screw this”, mind rape her to a comatose state, then pick a new Loyal Pony. Or Dragon.

I’m currently working on a black comedy/clop fic staring Octavia and Vinyl Scratch. Essentially its the Odd Couple except with murder attempts and lesbian horse sex.

When it takes place they’ve buried the hatchet, but keep up the murder attempts because, well, coffee just doesn’t taste right anymore without some arsenic in it, and Octavia can’t sleep at night unless she’s had to disarm a few traps.
Posted 9 years ago Report
Link Quote Reply

Hollow and Cold
Now, here’s the idea I had in mind, regarding my Epic.

Basically, it’s a group of tales, each with it’s own chapter, with a different story telling the tale of those six oddballs gradually becoming true friends. The big conflict, the hero moment they have, comes at the end. Think of it as a first season of sorts.

That starts with covering up a murder.
Posted 9 years ago Report
Link Quote Reply

@PonyPon
You have my attention sir.
Posted 9 years ago Report
Link Quote Reply

Hollow and Cold
@gasmaskangel
They believe they’ve killed someone (semi)important, then find out halfway through ‘season 1’ that not only did they not kill him, but he was an impostor. The first few ‘episodes’ are them trying to lay low.
Posted 9 years ago Report
Link Quote Reply
Interested in advertising on Derpibooru? Click here for information!