“It was raining. Pouring, really, because of course it was. They don’t have the guts to attack us in broad daylight. That’s why the crews are usually mixed - we have better night sight, unicorns have magic. Where was I…? Oh yes… We were both soaked to the bone, but we kept watching the sky, firing shot after another, the gun shaking with recoil ~~“
“Hang on, recoil? Doesn’t it fire laser or something?”
“What’s a… laser?”
“It’s… well, basically, a really bright, concentrated beam of light.”
“That sounds like something the Princess would use.”
“Hm, yes.”
“But… no. The projectiles are actually something called ‘plasma’. It’s kinda technical.”
“Plasma? Plasma of what? It’s red, so maybe nitrogen from the atmosphere… But how do you even feed enough energy into that thing? You’d need like… a star or something! Not that a laser would be much better, when I think about it. The waste heat alone should torch the whole gun ~~“
“Hey! Look, I don’t know all the details! I aim, I correct, and I shoot. The spotter is usually the one powering the gun, and doing most of the maintenance. All I do is ‘Hold this here’ and ‘Don’t touch that!’.”
“Right. Sorry. I just thought I’d learn something really groundbreaking.”
“I get it. Heh. You unicorns are all the same when it comes to these things. All I know is that it’s something to do with the channeling crystals. It takes time to charge them up, and they eventually stop working all together. Just go find a group of spotters in a pub, and they’ll ramble your ears off with environmental factors, cool down periods, recharge times, magic flows, ignition energies… Ugh. Just thinking about it makes me want to take a nap. Where was I?”
“It was a dark and stormy night?”
“Right! It was a dark and stormy night…”

Fuzzbutt
if it was a laser, you would only see a continuous line of light, not separate shots. in fact, you wouldn’t see anything at all, unless the laser was being scattered by fog. definitely some sort of plasma.

considering how slowly it left the barrel, and the amount of recoil on those hydraulics, it’d have to be some super-dense plasma.

Sciencepone of Science!
@MisterAibo
So, light actually does carry momentum, even though it doesn’t have mass. source

That’s this charging for 75 seconds, all released at once. And that’s a single 40mm shot worth of recoil.

Not saying this is wrong, I think you made the artistically correct choice since the recoil gives it weight and of course, looks awesome with that animation software, but I’m obsessed with physics and can’t turn down an opportunity to frame real-world physics :q 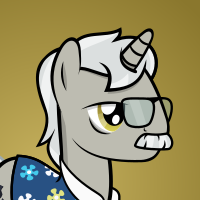 PunishedBean
@Background Pony #39AD
I’ve read something about experiments which had plasma confined by magnetic field, and giving the plasma some spin. As the plasma moved, the turbulence of the charged particles kept the field alive, which in turn kept it together.Basically, the more twist they gave it, the longer it would last. Still, matter of milliseconds, and it looked like a torus, not a cylinder.

As far as the picture goes, it was supposed to be an AA-gun powered by magic, and I kinda wanted to do recoil to give it a bit of an impact. Naturally, lasers have no recoil, and if you’re going to shoot projectiles, why even bother with magic at all? Additionally, the idea of a spell - even a fire spell - being a projectile is very common, and this way, if you squint just right, even sorta plausible.

The magic charge could be regenerating the magnetic confinement field while the projectile is in motion. Or some kind of force field, which would also give it better aerodynamic properties. In essence, the plasma would then be the destructive payload, and the “projectile” would be the magic field around it. The destructive capabilities would be more in the heat, instead of kinetic energy - maybe as it flies, the magic charge heats it up as well. In the end, the projectile would arc just like any other.

And who says the crystals have a barrel drilled in them?

Anyway, thank you for the input. There is no story or world building. I just like to give the images a bit of context, and let the viewer’s imagination take care of the rest.

Posted 5 years ago Report
Link Quote Reply
Background Pony #6EB3
Plasma is ionized gas and usually but not always exists at higher temperatures. Visible flame is partially plasma, but cool plasmas exist also. The gas in the glass tube of a neon sign becomes a plasma when electrical current passes through it, causing it to emit light.

Not sure how you would make plasma go out of a gun and hang together instead of dissipating. Possibly with electromagnets you might make the plasma go out the front at a useful velocity (say, 1 km/sec as a rough bottom end estimate) but it would slow down very rapidly as it passed through the atmosphere–like, within a few feet. Also not sure how a bit of hot air can damage stuff.

Good points: it’s a very well executed drawing, the animation is good. The gun tubes heating up to yellow-hot then cooling back off to red upon firing, suggesting they store energy then lose it with each shot, is well thought out and plausible. They appear to be firing a short burst every seven seconds or so, which is also sort of plausible.

Other questions I have in mind: do the plasma projectiles travel only in a straight line to the horizon? If so this weapon is not usable for indirect fire. Maybe it’s some kind of antiaircraft/anti-flying-individual gun. I suppose its apparent size, mass, and rate of fire make it kinda sorta very very roughly comparable to something like an old Bofors 40mm in a twin mount, but with a much, much smaller crew.

Hmm. Is there a story, or is there worldbuilding to go with this?