78 119 118 1 3
Subscribe
Galleries
Featured in
Sign in to create a gallery
Related
View VS Download DS
Uploaded 1 months ago by Background Pony #20F2
4000x2000 JPG 2.46 MB
This image is blocked by your current filter - click here to display it anyway

Oh BOY
.
What a dozy; such wow, many hours! I don't believe I remember spending so many hours on one drawing but this digital piece needed it, since it had to be worth it. Carrying on my MLP head-canon/AU; I'm passionate to go through with this long project of mine! <333
Since it interests me so much and allows for a lot of experimenting going on. ;;
Almost a continuation or past tense screenshot inspired drawing of my story, I wanted to capture the official MLP:FiM style to the 'T'. To make it more realistic and almost as if it came from the show itself! I believe I succeeded with this one!
And I'm very proud of it! Doing it all from scratch, it was all worth it. <333

A head-canon or alternate universe, if you wish; a time long after Princess Twilight has been crowned the ruler of Equestria when Princess Celestia and Luna had retired, Twilight was now responsible along with her best friends to take care of the land.
Yet as time when on and her appearance never changed compared to everyone else, is it possibly that other then being a Princess and an Alicorn; maybe she was more different then she thought. Immortality made her stand out among any-pony else. And with immortality, comes great happiness and great grieve…

Princess Cadence sobbed for the many time today, her body stiff and weak against the tall violet Alicorn that was shaking along with her own skin. Barely able to keep her own head up, Cadence's curved hair quite hardly hold itself up as the princess's head drooped towards the crystal floor.
With glowing, red cheeks and salty screaming tears streaming down her face. This moment had not been something to avoid; that should never be avoided. It has been going on for days waiting and grieving but even now, the news wasn't wanted. Wasn't needed. As the Crystal Empire itself was going through the motions, everything in the Empire of Love and Hope had ceased to a halt as the lost shook every citizen from here and beyond. Princess Celestia and Luna joined for a short while but decided for the family to have a moment of comfort in this impossible time. They own faces stapled with grief, Celestia shared her words to tear stained faces yet something like this can't just be solved with words. Waiting outside. She too needed comfort from her own sister as experiencing such a level of emotions was beginning to break down her composer.

"Cadence…Please don't say that now…Come here."
The Princess of Equestria comforted sorely as her golden shoes clapped sadly against the polished crystal floor to meet lined carpet, her lightly starry mane near marking half her swollen face. Even as her movements were slow, she was partly like that to be more delicate with the fragile pink Alicorn that leaned against her right leg which the next part was cracked with her own grief.
Face shadowed by the low sun, feelings of yellow, purple, and pink hair bouncing against her skin. Twilight's face glossy with her own sadness as her Sister in Law sobbed harshly against her one hoof embrace.

Only accompanied by a softly sobbing young foal behind. Her equally curly mane bobbing lightly against her crying face and pastel pink fur. She carried in her magic a black soaked handkerchief that have not left her since coming back from the wake. Almost cruel to hear her stiff sniffles and tears escaping from her facial outlets.

"We…W-We know it was going to happen, I… I knew it at least. I-I am… I-I'm sorry, I shouldn't be talking like that. I… Miss him so much, too…"
Twilight muttered through her own tears, using all her regal willpower and self-control to not just scream and sob as louder as she could. Her words casing spikes of soreness and grief throughout every inch of her being. Biting her tongue inside her cheeks, she knew her words didn't help as Cadence seemed to wail weakly yet loudly into her shoulder. Coursing wet stains to bleed into her fur and stick them together to soak towards the skin.

'Stupid. Stupid. Stupid. STUPID. WHY did I say that?? Stupid Twilight just shut up! Be quiet! Your making things worst then they already are…'
She thought harshly to herself, hating immediately what she said and this tightness in her throat that threatened to suffocate all the air from her lungs. Managing to lift her eyes towards the pastel pink foal that was her Niece; Flurry Heart was barely keeping her own composer. Being here inside the Crystal Empire's castle, she could let her sombre emotions rain over her fatigue expression.
Such a look broke the violet pony's heart even more and slowly, she too buried her mournful face into Princess Cadence's side as the feeling of her mournful soul made her heart race.

"I-I…I-I'm sorry, C-Cadence. I-I didn't mean to say that I-I'm sorry-…"
Twilight sniffled and stopped into Cadence's side, moving her lips so that the sobbing Alicorn could hear her. Unfortunately, being in a state where even the most comforting of words couldn't reach her, Twilight had to listen and watch as the sister she loved most breaking down in front of her whilst her own heart desired to follow. Eyes stinging from collecting her tears, they almost burned as she clenched them shut and held Cadence even closer. Flurry Heart frozen in her place, her face crumbling and twisted in tightness.
No one saw the spark change of colour within Twilight's pupil and the echoing words that surfaced in the violet Alicorn's mind. Her expression stuck and moulded with the sun's shadow.

3 comments posted
Background Pony #E20D
It just so emotional I running out of tissue 😭
Posted 1 months ago Report
Link Quote Reply
Deverenus
Twilight, you know what to do… 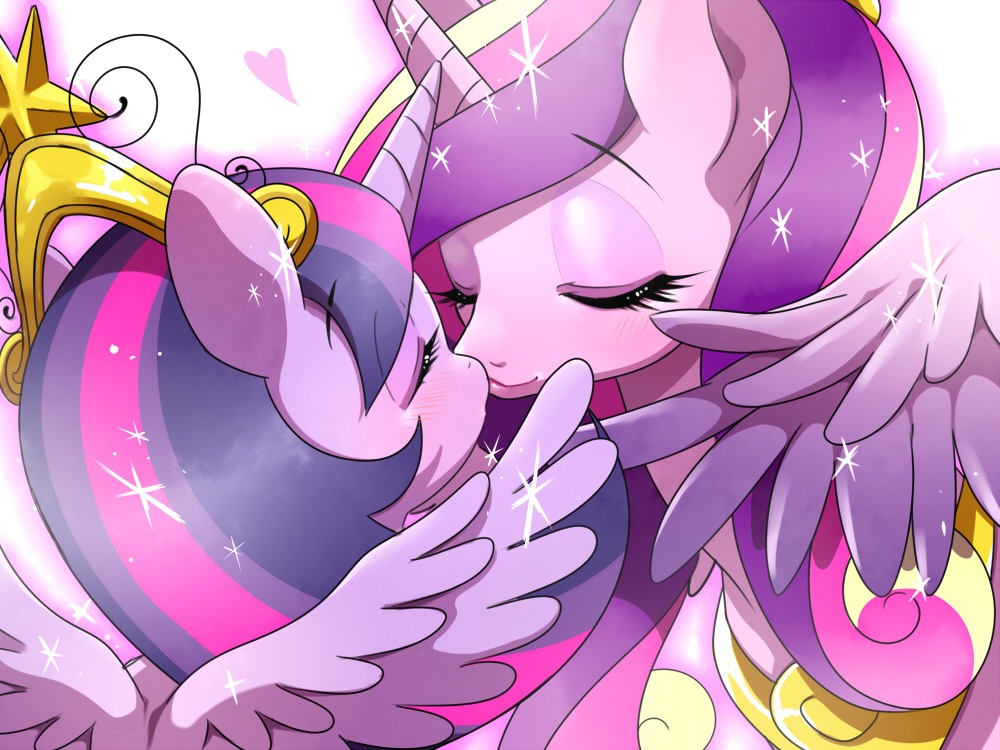