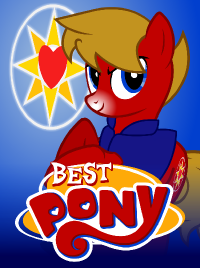 LEGO Brick Specialist
When reading this comic, who could hear Soundwave’s unique voice in their head, and who would be voicing him? (For me, it’s a tie with either Frank Welker and Isaac Singleton Jr.)
Posted 5 days ago Report
Link Quote Reply
Background Pony #6684
@FoldabotZ
Well, unless if there could have been a rewritten version of Scramble City that could fit perfectly in the American cartoon continuity with the same plot but set in the then-future year of 2001 instead of 1986 but end with Metroplex defeating Menasor and Bruiticus and Metroplex, Optimus Prime, Ultra Magnus, the Aerialbots/Superion, and the Protectobots/Defensor celebrate their victory and use the plot of the movie prequel comic published by Madman and IDW to be set before or during the plot of Scramble City.
Posted 2 months ago Report
Link Quote Reply

Posey Bicce
@Background Pony #EA41
Sounds about right.
Posted 2 months ago Report
Link Quote Reply
Background Pony #EA41
@DarkMageDragon
Then, the entire tap army except Rumble and Frenzy were pets to Soundwave? So I guess that means Ravage, Laserbeak, Buzzsaw, Ratbat, Slugfest, Overkill, Beastbox, and Squawktalk were Soundwave’s pets while Rumble and Frenzy were twin henchmen to Soundwave.
Posted 2 months ago Report
Link Quote Reply
Background Pony #5D7F
@FoldabotZ
Of course the movie did reached Japan until three years later. And the movie has reached theaters worldwide in 1986 except for Japan. And in the beginning of Headmasters which is technically not canon to the cartoon in America because it ignore the events of “The Rebirth”, they showed us a different way how Optimus Prime died before the events of season 3. They even had Ironhide, Prowl, and Wheeljack appeared in Headmasters as a continuity/animation error. But the anime does feature return appear lances of old characters from the first two seasons which are Hound, Sideswipe, Sunstreaker, Smokescreen, Tracks, and Inferno. All six survived the events of both American and Japanese Cartoon Continuities. Speaking of Smokescreen, Smokescreen was originally gonna be the Autobot killed in the Battle of Autobot City next to Windcharger instead of Wheeljack in the movie. But unfortunately, Smokescreen’s role in the film was replaced by Wheeljack in the final film. Even the deaths of Trailbreaker, Mirage, and Red Alwrt are scrapped from the finished film. Like Huffer in “Dark Awakening”, Trailbreaker, Mirage, and Red Alert’s deaths aren’t fully animated which makes them died offscreen. Unless you or we wanted to expand the movie with deleted scenes from storyboards, some extra scenes and quotes from the IDW Comic Adaptation of the film (including the one where Cyclonus’ Armada was killed by Grimlock after his creation since the idea of Cyclonus having copies like Scourge was dropped out of production and there’s one Cyclonus jet (which is Cyclonus himself) seen throughout the rest of the film and the final two seasons as well as Headmasters after his birth/creation), the quotes and scenes from the original script that were cut in the final film, and the exclusive comic that was set after Ultra Magnus was killed by Galvatron, Cyclonus, Scourge, and the Sweeps on the planet of Junk and Hot Rod, Kup, Wheelie and the Dinobots escaped from Quintessa and before they landed on Junk which is entitled, “Rodimus vs Cyclonus”. Even Shockwave’s death was fully recovered in the IDW Comic Adaptation of the film. Which makes Shockwave along with Reflector Especially when Red Alert and Mirage appeared in flashback scenes that were set before the events of the film in Headmasters. And even Wheeljack’s appearance in Transformers Victory is also a continuity error too. This meant that the movie had not yet reached Japan. And the makers of both Headmasters and Victory did not know that Ironhide, Prowl, and Wheeljack are dead and Optimus Prime died in a better way before the events of season 3. Especially when Ironhide and Prowl are mentioned by Daniel in both dubs of the season three episode “Dark Awakening”. And when the Binaltech storyline was released, it was revealed that the Ironhide, Prowl, and Wheeljack appearing in Headmasters and Victory were just from an alternate universe/timeline. Also, in the Japanese dub of “Five Faces of Darkness - Part 1”, Perceptor did not mention led that Metroplex’s old transformation cog is battling damaged during the Battle of Autobot City in the movie because the movie wasn’t released until 1989. And the Japanese Continuity explained that Metroplex’s old transformation cog was ripped out and destroyed by Trypticon before Metroplex defeated and possibly destroyed/killed him during a city titan battle after the events of Scramble City. That comic set after Scramble City starts right were the special left off since it ended on a cliffhanger. And of course Scramble Cory is canon. Because it was canon the Japanese Continuity and it was set between season two and the movie. But when the Madman comics was released in 2007, it ignore the events of Scramble City because in the Japanese Continuity, the construction of Autobot a city already started too early and Scramble City was set a year after the events of season 2 and 19 years before the events of the movie while in the American Continuity, the Madman Comics was set sixteen years after the events of season 2 and four years before the events of the movie and the construction of Autobot City and possibly along with Metroplex start in the year 2001.
Posted about a year ago Report
Link Quote Reply
Background Pony #A539
@FoldabotZ
Yeah. You’re right. Scramble City is not canon to the American Continuity of the cartoon. Heck even the Madman comics had it’s own Scramble City plot that set between season 2 and the movie but skipping 16 years into set in the year 2001 instead of 1986 and then skipping 4 years into the future in the year 2005. Even the Japanese exclusive sequel series The Headmasters, Super God Masterforce, Victory, Zone, Beast Wars II, and Beast Wars Neo are not canon to the American Continuity either because Jason end the cartoon way too early after season three had ended, cancelled season 4 and made Headmasters ignore the events of “The Rebirth”.
Posted about a year ago Report
Link Quote Reply

FoldabotZ
Novice Brony
@Background Pony #729A
Yes, Scramble City is part of the Japanese canon. As you said, Scramble City was never released in English and to my knowledge, there’s no subbbed version. Anyways, while I have not watched the Japanese version of Five Faces of Darkness, I can assume they changed the dialogue to take into account the events of the OVA. Then there’s the aforementioned Legends Manga which filled in the gaps and cleared up any inconsistencies.
Posted about a year ago Report
Link Quote Reply

FoldabotZ
Novice Brony
@Background Pony #CA63
To my knowledge, only the 4 I mentioned were part of the Battle of Autobot City. Lqserbeak ony appearing in the beginning. The Madman comic was released in 2007(set in 2001) while the movie was released in 1986(but set in the then-future of 2005). It would be a retcon that these other cassette bots might have been in the movie but at the time the movie was originally released, they had yet to exist. As for Scramble City, it was released exclusively in Japan in 1986 to explain the origins of the upcoming 1985-86 assortment as the movie wouldn’t be released in Japan until 1989(?). Also, Metroplex’s debut in Five Faces of Darkness said that his Transformation Cog was damaged in the Battle and he couldn’t fully transform to fight. This means he already was around prior to the events of the movie, making Scramble City still canon.
Posted about a year ago Report
Link Quote Reply

Posey Bicce
@Background Pony #CA63
I don’t remember seeing Squawktalk or Beastbox so no.
Posted about a year ago Report
Link Quote Reply
Background Pony #CA63
@FoldabotZ
Wait, are Laserbeak, Buzzsaw, Slugefest, Overkill, Beastbox, and Squawktalk part of the Battle of Autobot City too? You know. Because Ratbat, Slugfest, Overkill, Beastbox, and Squawktalk were present during the events of the Madman comics which is set between season 2 and the movie but ignoring the events of “Scramble City” and set in the year 2001 (the year of when My twin sister Ally and I were born) instead of the year 1986. Because this comic shows us the construction site of Autobot City which is the new main Earth setting from seasons 3-4. And Scramble City is not canon to both American and Japanese Continuities because the season 3 premiere, “Five Faces of Darkness” shows us a proper birth/debut of Trypticon. Despite Scramble City ended in a cliffhanger. And speaking of Madman comics, I bet that the Ultra Magnus, Hot Rod, Kup, Blurr, Arcee, and Springer come to or first arrived on Earth between season two and the Madman Comics and/or the movie for unknown reasons.
Posted about a year ago Report
Link Quote Reply

Posey Bicce
@FoldabotZ
Thanks for answering, so he can really stuff it all in. Is there a limit?
Posted about a year ago Report
Link Quote Reply

Posey Bicce
@William Flutter
It’s kind of a thing in real life regarding Soundwave’s compartment, but I wonder if he does have limited capacity in media as well?
Posted 1 years ago Report
Link Quote Reply

Plus there`s the sequel too

Posey Bicce
@William Flutter
Can be that too, they didn’t send everyone after all.
Posted 1 years ago Report
Link Quote Reply