@SeraphimDawn
Looking at their platform-mates, those two ought to be pretty decent off road.

Yep, the Avalanche was discontinued in 2013 too. I’ve never heard it described as looking like a sedan before, though. The first body style always looks sci-fi-ish to me (in the same way as the Aztek), and the second just looked like someone attacked a Tahoe with a Sawzall.

Good grief, the EXT is a tarted up Avalanche.
I don’t understand luxury trucks.

Because manly men who like manly trucks also want to have ridiculously luxurious vehicles? And/or because people who want ridiculously luxurious vehicles might sometime maybe carry something, so of course they need a full size truck? I don’t get them either. If I had over the top luxury car money, instead of making a luxury car out of a truck, I’d probably rather do the opposite:

I feel like I didn’t phrase that clearly. I’m asking if there have been other Cadillac and/or Lincoln trucks ever since they were founded.

Yes, like the Blackwood. I feel like that doesn’t look too bad but the bed reminds me, what if someone wore a plain black top and wore striped pants?
Posted 5 years ago Report
Edited 5 years ago
Link Quote Reply

Pomegranates :P
@Flying Pancake
People say the Escalade will do fine on dirt roads.
But the LR pretty much goes everywhere.
Now I wonder if the Infiniti QX80(Infiniti vehicles are BEAUT!) or the Lexus GX 460 car capable of similar feats as the LR.

Good grief, the EXT is a tarted up Avalanche.
I don’t understand luxury trucks.

Didn’t that also get discontinued with the EXT?
It barely looks like a truck.
More like a raised sedan with an exposed cargo space.

The EXT was probably one of the most pointless vehicles in modern automotive history.
Posted 5 years ago Report
Edited 5 years ago
Link Quote Reply

Good grief, the EXT is a tarted up Avalanche.

@SeraphimDawn
I’m not sure I’d say the Escalade is really capable off road. Sure, it’s a body-on-frame truck platform, but it’s not equipped for it or even advertised as an off roader like Land Rover is. A better comparison in my mind would be to a conversion van, since that’s another heavy duty on-road platform adapted into a luxury vehicle.

The Lincoln pickups have always been a sort of “what were they thinking” vehicle for me. The person who wants a truck isn’t looking for a Lincoln, and the person who wants a Lincoln isn’t looking for a truck, so who is this designed for? That and it might be the ultimate example of low effort Lincoln rebadging. I will say that the split grilles on the 2014 look better than the same year Ford, though.

Oh, and there was another recent Lincoln pickup- the Blackwood, produced for only 2002: 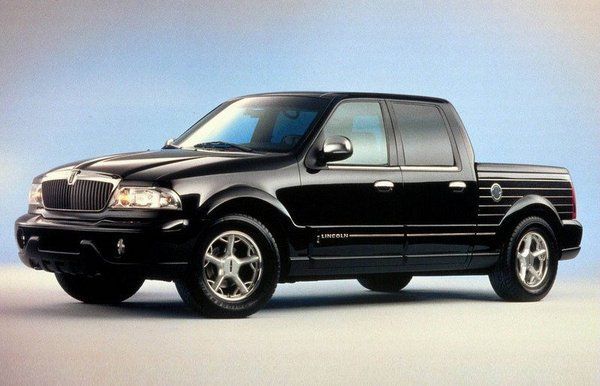 The mismatch between the multiple horizontal bars on the bed and the single one on the cab section has always bugged me.
Posted 5 years ago Report
Link Quote Reply

Pomegranates :P
@BarryFromMars
They were all discontinued years ago. Due to abysmally poor sales.
For probably obvious reasons.

Speaking of which.
How does the Lincoln Navigator compare with the Escalade?
Posted 5 years ago Report
Link Quote Reply

Pomegranates :P
@kleptomage
And the Escalade.
The Escalade at heart is a truck, like any other traditional large SUVs. It’s as much a workhorse as it is a luxurious ride.

There’s even a Pickup version of it! 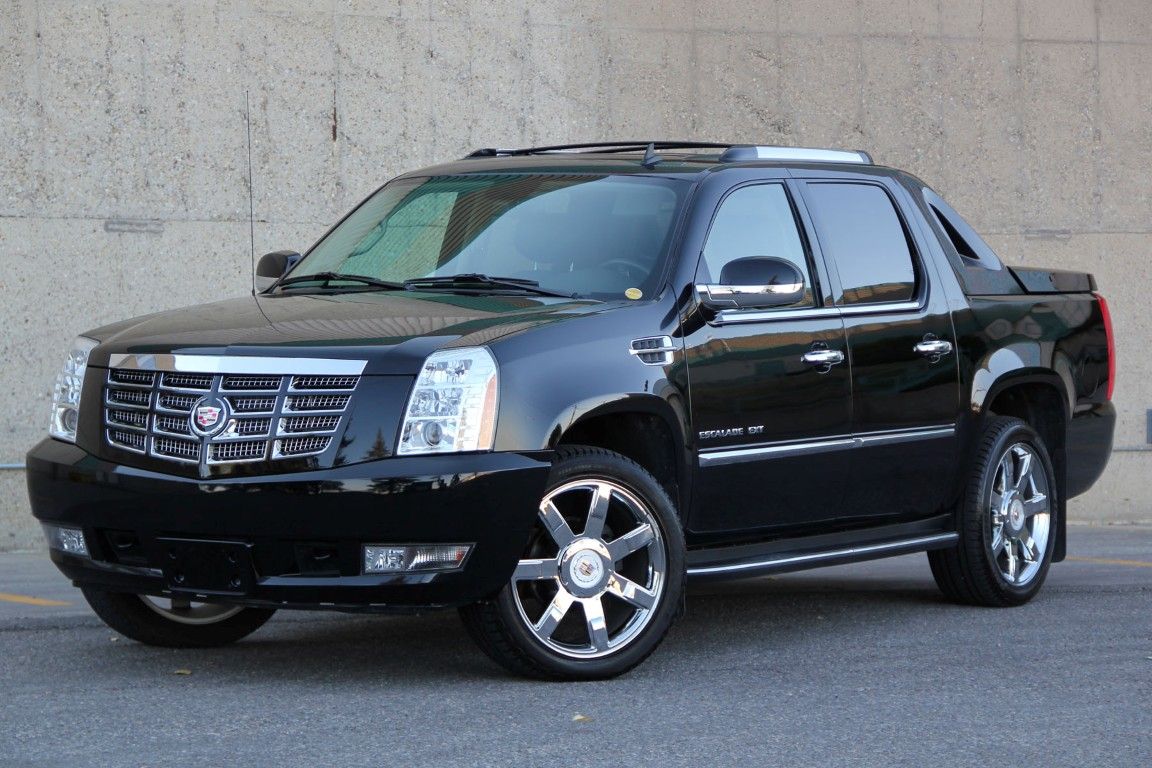 The EXT.
These were discontinued in 2013. Said to be one of the worst selling vehicles of that year.

I rarely see them on the road. But that thing looks like a beast!

Even rarer are the Lincoln Mark LT which were discontinued some years ago 2008 in US/Canada. But for some reason continued to 2014 in Mexico.
Only seen one in my life so far.

They’ve replaced it in the US with the 2009 F-150 Platinum that came with an upscale trim as a placeholder. 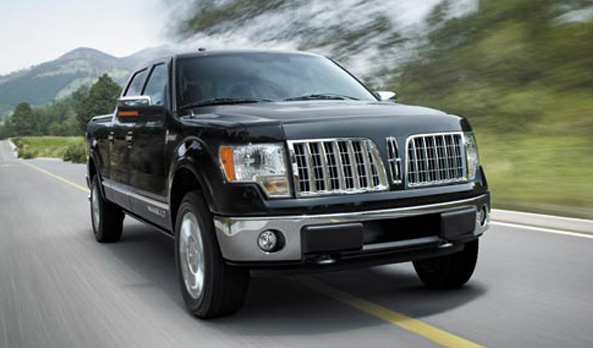 Pomegranates :P
On other note.

I find an appeal for luxury SUVs to off road.
Normally one would expect luxury to be synonymous with “delicate” and “urban, class, and sheltered”.
But what about going outdoors in style?

It’s like a clash of two worlds.
Or seeing an elegant character like Rarity showing her athletic and daring side.

Pomegranates :P
@RainbowDash69
Are you sure they weren’t Jaguars?

Chrysler/Dodge/Jeep has always been one to stick to tradition… maybe until recently when they’ve completely sold out to SUV crossovers craze. But then again, Jeep have always been the type to make those kinds of vehicles. They were basically pioneers in that segment.
Why did FCA discontinue the Dodge Avenger?
Posted 5 years ago Report
Edited 5 years ago
Link Quote Reply

Prison Jumpsuit Lover
@SeraphimDawn
I see those Kia cars all the time. Always thought it was just a generic Mercedes wannabe. the blinkers are nice and it had a nice classy look. I much prefer the newer Kia cars after 2011.

@SeraphimDawn
Eh I like the Challenger for the retro taillights. The Dart, Durango, and Charger are very uncreative though. Kudos to Mustang for sequentials!

And I just remembered one thing the Amanti did really well: the turn signals on that thing are amazing. I can’t find a good picture of them lit, but they’re that bar under the bumper and they’re incredibly visible. It had to be one of the first cars to use LEDs for that, so cool points for Kia.

It’s a small detail but the sequential turn signals on the Mustang really get attention. Excuse the lousy gif. It’s the best I could find on short notice.

Pomegranates :P
@Flying Pancake
You SHOULD give Megas XLR a try!
Trust me. It’s pretty funny.

Seventh generation Sonata looks beautiful! It’s also one of the few cars with panoramic sunroofs in its segment’s price range. Just like its cousin Kia Optima.
The sixth generation looked quite unsettling, it didn’t sell well in Korea but sold relatively well in North America. Koreans preferred the more conventional appearance of the seventh gen. I don’t know what they were thinking when they made the sixth, it looked deformed.
Posted 5 years ago Report
Link Quote Reply

@SeraphimDawn
Hyundai didn’t really get the Sonata “right” until the fifth generation: 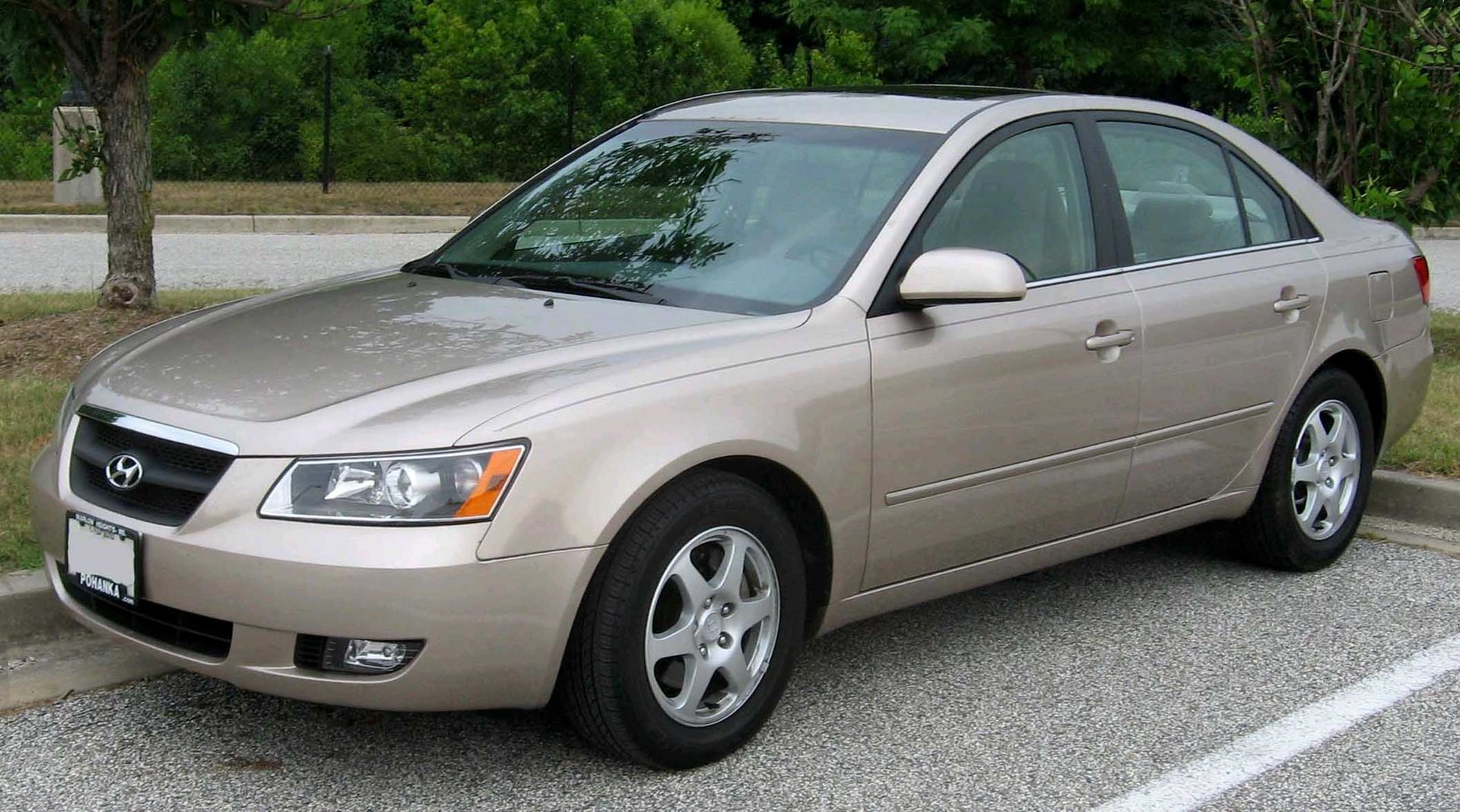 And then things got a little weird for the sixth: 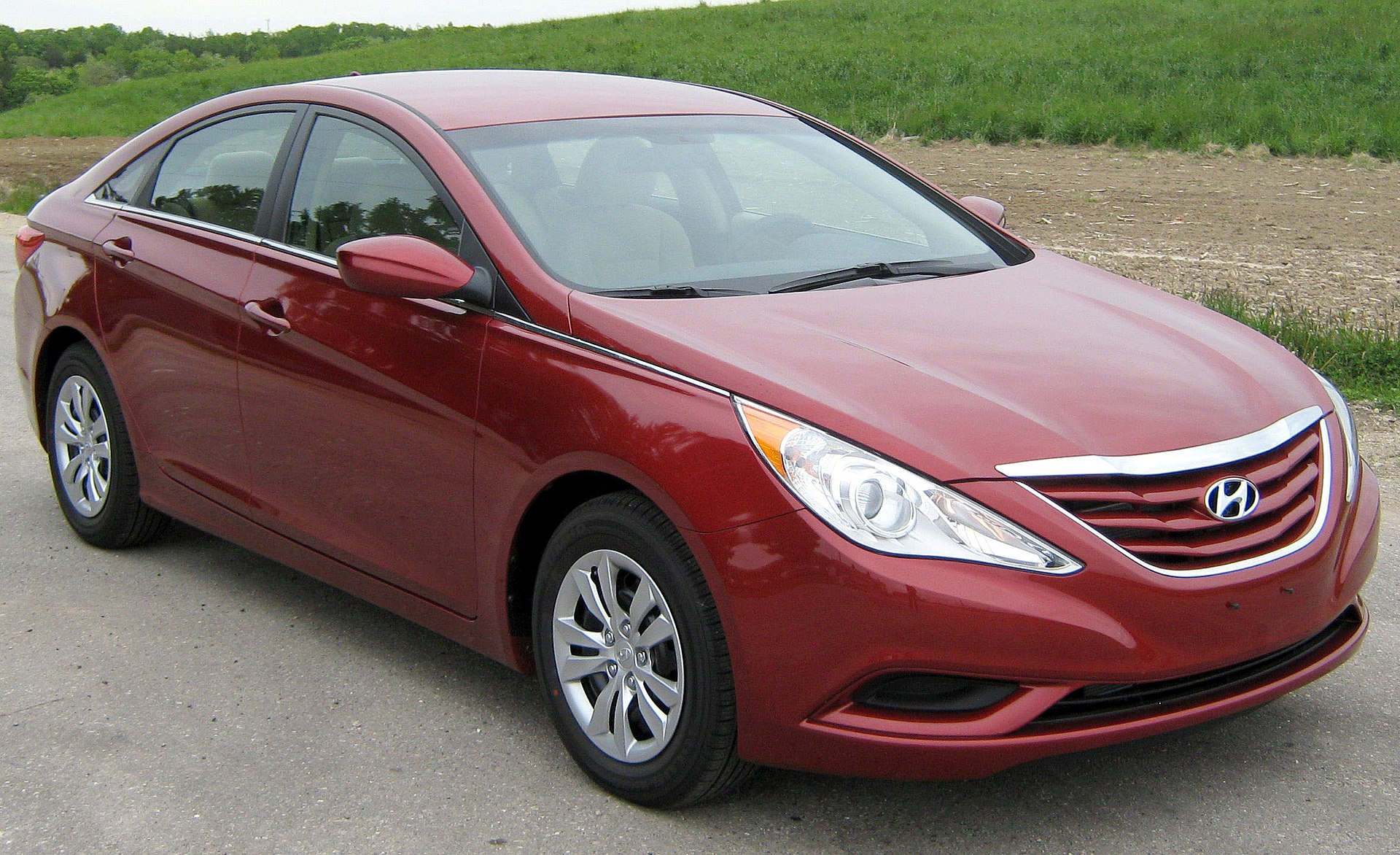 But the seventh is a decent, if simple, looking car again: 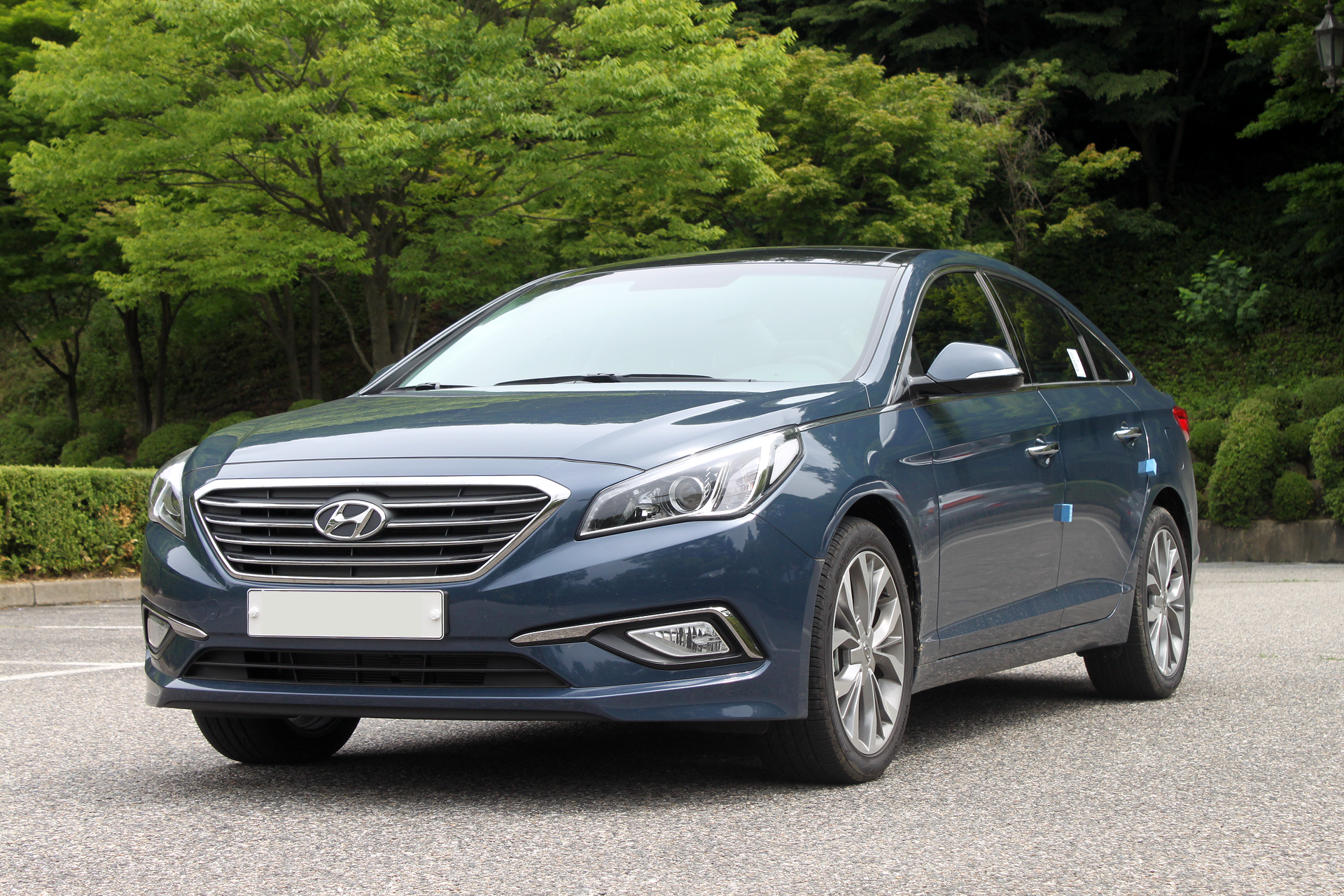 And I just remembered one thing the Amanti did really well: the turn signals on that thing are amazing. I can’t find a good picture of them lit, but they’re that bar under the bumper and they’re incredibly visible. It had to be one of the first cars to use LEDs for that, so cool points for Kia.

Is Megas XLR any good? I don’t think I ever saw much of it when it was on the air.
Posted 5 years ago Report
Link Quote Reply

Pomegranates :P
@Flying Pancake
That was what a lot of people including me thought.
It was like a Kia masquerading as a Mercedes or a Jaguar. Then again, Hyundai loved to copy German automaker Mercedes’ aesthetics back in the early 2000s, as evidenced in their 2004 Sonata.

As for the Amanti, it did look like a Jaguar S type. 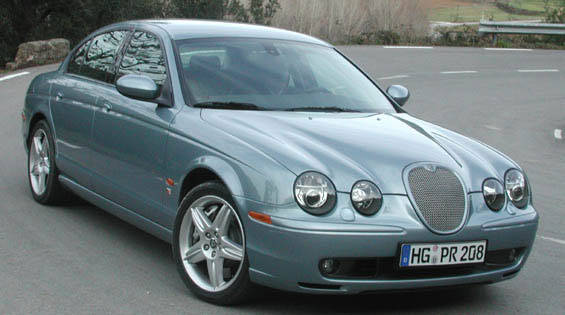 @SeraphimDawn
I used to see an Amanti just like that one all the time. The thing always kind of irked me; every time I saw it my train of thought went something like: “Oh, look, a Mercedes! (gets closer) Wait, maybe that’s a Jaguar… (closer still) Oh, right, it’s just that Kia pretending.”

Looking back, it’s an attractively designed car, even if it is pretty derivative. It never even occurred to me that it might be uncommon.
Posted 5 years ago Report
Link Quote Reply

Pomegranates :P
@Flying Pancake
Outbacks are also quite common in the Lower Mainland of BC.
Subaru is HOT brand in Canada!
Posted 5 years ago Report
Edited 5 years ago
Link Quote Reply

@kleptomage
Yep, it was New England. Most of them were Outbacks, if I remember correctly. And actually, come to think of it, a not-insignificant portion of them were L.L. Bean editions. I’m not sure if I could come up with a more stereotypically New England car if I tried.
Posted 5 years ago Report
Link Quote Reply

Pomegranates :P
@kleptomage
While I personally find a certain appeal to “quiet luxury”, I do agree Lincoln is going over their heads by charging consumers a hefty price for a car from an ailing luxury brand.

@Flying Pancake
It was a unique grille appearance that actually made Lincoln cars stand out. Lincoln cars are like unicorns here.

There’s quite a bit of Subarus in Western Canada here. Most of the Subarus I see on the road are Foresters and Crossteks, and Impreza hatchbacks. Legacy are fairly seldom, but not too uncommon.
WRX of course, are not uncommon either.
There is also a lot of Fiats.

Full size sedans, except for Impala, 300s, and Chargers, are a rare site. There’s a fair amount of Merc-B S class and BMW 8 cars on the roads of Vancouver. But not too much anywhere else. Jaguars and Porsche, seldom Bentley.
I rarely see the Kia Cadenza, Nissan Maxima, never seen the current generation Toyota Avalon(though I might have mistaken them for Camry), Hyundai Azera aren’t even sold here anymore, I occasionally see Genesis and Equus. Only saw a Kia Amanti once by its rear.

Speaking of which. Has anyone seen the Kia Amanti(also known as the Kia Opiris) in person before? It’s an elusive former flagship car of Kia. hat was succeeded by the Cadenza and later by the almost nonexistent K900. 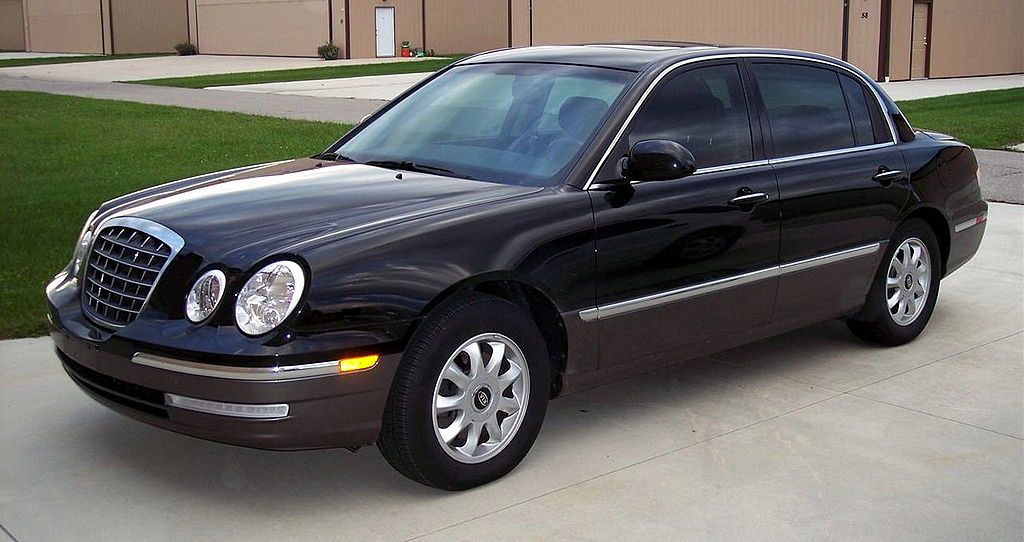 @SeraphimDawn
In theory Mercury was supposed to fill the gap between Ford and Lincoln. It didn’t work out so well.

@Flying Pancake
Was it New England with the majority of Subarus?

Yeah, if I was going to drop north of $60k on a car with a 400 hp engine, it would be from a brand that doesn’t define its approach as quiet luxury.

@kleptomage
Yeah, must be a regional thing, then. Like how where I live Subarus are pretty much unicorns, but other places I’ve been have been they’ve got to be 2/3 of all the cars on the road.

Yikes, $60,000? The Continental is nice and all, but I can think of a whole lot of cars that I’d rather spend that much money on.


@SeraphimDawn
Oh, right, those horizontal bars were nice looking. Maybe they can coexist and evolve with the Continental?

And I’m pretty sure Lincoln is supposed to be full luxury, but they just don’t really have the credibility to go against Mercedes or BMW. Too many years of barely-rebadged Fords and a little bit of Buick-style “old person car” image haven’t helped them.
Posted 5 years ago Report
Link Quote Reply

Pomegranates :P
@kleptomage
I thought Mercury was supposed to be Ford’s “near luxury” equivalent of Buick.
Lincoln is the full lux. Or was it an entry level luxury like GM’s Oldsmobile?
Posted 5 years ago Report
Link Quote Reply
Showing results 8151 - 8175 of 8479 total