(Note: this headcanon/fanfic idea uses two oc’s, made by Delta Brony and EStories, respectively)
Twilight, in my verse has two sisters:
Twivine and Silverlay.

USA says NO WAR
(Feel free to ask our heroes questions the TRADITIONAL way now! :D You can change the story possibly depending on what you ask _
https://derpibooru.org/tags/ask+the+mane+11 )
Okay, so essentially once our heroes fail at proving their claims of being from the future, even through Sunny’s creative thinking of having a letter sent out to her in the future to bring back to the past, the Princesses still assume that it was an alteration spell mixed with a copy spell to make the letter seem as if it was duplicated and made to look old, as if Izzy Moonbow helped fake it.
Before Celestia and Luna decide on what to do, Sunny pleads for them to reconsider and allow them to try again, even twilight who actually does believe our heroes can’t seem to make Celestia or Luna change their minds as the princesses claim that they’ve been tricked before and can’t have it happen again.
However Sprout chimes in the conversation and points out when did Luna suddenly change her appearance to her more adult look as he says “You didn’t look like that when we first came here”. Then Hitch looking confused at Sprout causes Sprout to say “What?” with Hitch replying “When did you get here?!” As Sprout then replies “Hitch, the six of us all came together.” Sprout states before Celestia and Luna look on at one another “The odd thing is, I actually recall you appearing like this before you became Nightmare Moon in the past” Celestia says as she refers to the inconsistency within the show about Luna and Celestia’s past pastel appearances being retconned.
“Sprout, what was the last thing you can remember?” Sunny asked concerned “Well, I basically was setting up the Time Scroll we found into the machine so we could all come back here. As Sheriff, I made sure to have all our officers-” though Hitch interrupts him “Whoa whoa whoa- SHERIFF?! You were straight up barred from the station! Also I’M the sheriff!” Hitch says “Wha- no, you’re the chief of police, man!” Sprout interjects “…Chief? ._.” as hitch looks down at his badge and re-read it
“Another one?” Zipp asks looking at her sister “Another one” Pipp replies “What is this, what’s happening?” Celestia asked a bit more angry than concerned “Princesses, before we could get our hooves on the scroll, some strange cat lady grabbed ahold of it and according to the scroll, she went back somewhere near this time. So we had to use a machine powered by the scroll to head back here since the scroll was torn.” Izzy Moonbow explains
“Since Sprout is here and not manning the machine, it makes me wish my phone was working so I could-” though with that being said, Pipp’s phone seems to go off rapidly as due to earlier command, it indeed goes live to all her subscribers “…uhh… Heya Pipsqueaks ^^;”
(The “Pipsqueaks”, like in the movie, will be you all at home asking them questions :) the cyberpunk thing should more or less come very soon and explained. Hope you all are looking forward to it!)
Posted about 15 hours ago Report
Link Quote Reply

97blackbird
@BigBuggyBastage
no, you’re just among your peers.
Posted a day ago Report
Link Quote Reply

Go fsck yourself
@97blackbird
Mmm, Bennies, pink berries… I used to eat that stuff like candy. Still keep it around for emergencies, in lieu of an EpiPen.
Now I “dual-use” hydroxyzine, for allergies AND knocking me out (but only very occasionally). That stuff is second only to Seroquel, an antipsychotic, in terms of “messes with your mind hardcore, but is really great for allergies”. LoL
Then there’s the Adderall XR, which is for AD(H)D, but also seems to be good for allergies and offsetting the sedative effects of the antihistamines.
I’m a damn mess. 🤣
Posted 2 days ago Report
Link Quote Reply

Returned from the Deep
@Cosmas-the-Explorer
As a fair warning, it’s a Monster Girl Encyclopedia fanfic, and a prequel meant to show how that world ended up the way it is now.
Posted 2 days ago Report
Link Quote Reply

Background Pony #A22C
@Cosmas-the-Explorer
I actually like to imagine her being half genius, half athlete.
After all, she is a half girlgy girl, half tomboy. (at least in my head.)
😛
Posted 3 days ago Report
Link Quote Reply

97blackbird
@Once-Communist Starlight
Lol! Yes, quite the troupe we would be!
IRL I pop Benadryl on the regular. So BigBug and I would look like pill-popping dope fiends if Vegas has a high pollen count.

Looking at my past. Oof
@97blackbird
@BigBuggyBastage
Lol, this all sounds like a wonderful outing of a motorcycle, once-communist furry fennec fox, and an allergenic robot!
Posted 3 days ago Report
Link Quote Reply

97blackbird
Oh, I’m sure if the conversation flagged I could simply ask you to talk about Horse Hearsay and that would perk you right up! To bad we couldn’t both meet in Vegas and try to track Joe down!
Posted 4 days ago Report
Link Quote Reply

Returned from the Deep
I managed to publish two chapters from my story in the same month. Life is good.
On a sidenote, I finally managed to figure out how to paste a story into the ff.net app without it completely destroying the original formatting.
Posted 4 days ago Report
Link Quote Reply

Looking at my past. Oof
@97blackbird
Oh god I would literally melt, I am terrible with conversation lmao
Posted 4 days ago Report
Link Quote Reply

Applepie2021
Nostalgia Purist
Applejack had waited for Hearts and Hooves Day for so long since Winter Wrap Up, and she always used to hang out with her friends. There was a pony clown that gave balloons away, arcade games and more in Ponyville that sunny spring day. Applejack walked by herself at the many stalls for a while. There was a white pony with hat and glasses she fell for first but he was too serious for her. But Applejack met a smelly stallion that had a garbage can as cutie mark. The smelly stallion had his eyes covered by hair and he got some long balloons from the pony clown. Applejack presented herself for the smelly pony and they walked around in Ponyville for a while. Later that sunny evening was The Mane Six together at the annual Hearts and Hooves Day picnic by the hills. After the picnic was Pinkie Pie giving her friends a red, big, shiny and heart shaped balloon on a string each. Applejack and Rarity played with their heart shaped balloons in long time as Rarity felt her horn tingle by grabbing the soft balloon skin with her hooves. The party ended midnight.
Posted 4 days ago Report
Edited 4 days ago
Link Quote Reply

97blackbird
Forward and upward!
Man I wish I could meet you for lunch! This sounds like it would be a fascinating conversation!
Posted 5 days ago Report
Link Quote Reply

Looking at my past. Oof
Looking at some of my older stuff made me realize I needed to change.
Farewell to my old ways, comrade. Change is best ❤️
Posted 5 days ago Report
Link Quote Reply 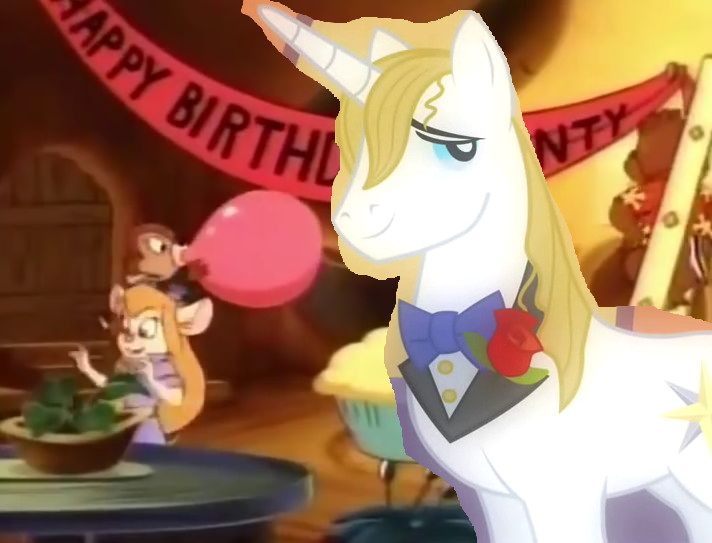 Prince Blueblood was in the Rescue Rangers HQ one day as they prepared for Monty´s Birthday. Dale blew up large round balloons as Chip, Gadget and the horse sat up banners. Prince Blueblood was scared of balloons but he also felt relaxed by feeling how the mouse gave his horn a balloon massage for six hours straigh as the two chipmunks watched and rubbed themselves under their legs.
Posted 6 days ago Report
Edited 4 days ago
Link Quote Reply

USA says NO WAR
I have found a way to get the Cyberpunk look onto our heroes as well as introduce a Cyberpunk world into the same timeline! I know it sounds impossible, but you’ll see and it’ll be all because of our favorite boy. Hope you’ll stick around to see our cool designs soon
Posted 7 days ago Report
Link Quote Reply

@Background Pony #2C10
Silly me I forgot.
Maybe being an alicorn would give her some enhanced natural strength of an earth pony.
Posted 8 days ago Report
Link Quote Reply
Showing results 1 - 25 of 13312 total